This is a topic that has been mooted in a few quarters since I’ve started my blog, so I thought I’d discuss it now. The topic? The heavy metal ‘uniform’ and my obsession with metal-related t-shirts.

I could be lazy and write the smallest blog ever, by saying ‘black’ and leave it there. But, however accurate this may be as a one-word description, it misses out on so much. I mean, if we look back at the time around the birth of metal in the 70s, the uniform was dominated by demin and patches. I’m talking about a time prior to my birth, so please forgive any inaccuracies at this point. A metalhead seemed to be judged or revered by the amount of metal-related patches that could be sown onto a denim jacket, often stonewashed blue in colour. Generally, the back of the jacket would be dominated by a huge patch of the wearer’s favourite band, with the rest of the garment covered in smaller band logos, all sewn on with pride. In many cases, you’d have to assume it started life as a denim jacket, as all visible proof had been eradicated by pictures or skulls or illegible logos. It always raises a smile when I imagine the person sitting at home, headbanging away with needle and thread in hand. What an incongruous image!

Of course, the denim and patches remain and, like vinyl, is going through a bit of a renaissance. It has always remained strong on the European mainland, but here in the UK, it is making a bit of a comeback after years in the wilderness.
Then there were the 80s, dominated by the white high-top trainers and tight jeans, favoured by the likes of Iron Maiden and any number of American thrash metal bands. So far, not that black!

I was too young for the denim and patches look. To be honest, I was too young for the high tops too. I began to get into metal more and more seriously as the 90s marched on. It also coincided with finishing my GCSE’s and starting ‘A’ Levels (for those non-English reading this, I’m referring to the years immediately before going to University, between the ages of 16 and 18!) As such, the school uniform was discarded and I was able to create my own uniform. This is where things become a bit more black.

Black jeans and black ‘cowboy’ style boots gave me that metal/goth hybrid look whilst the painted leather biker’s jacket gave the ensemble something a bit different. However, the look was dominated by one thing (and here we get to the crux of this post), the metal t-shirt.

My very first t-shirt was Guns N’ Roses, but I quickly added to this – at this time, markets were big business in Suffolk and a couple of stalls sold heavy metal merchandise. Looking back, they were almost certainly counterfeit, but I had no idea of that at the time and so picked up a couple of Metallica and Slayer designs, amongst others.

It was when I attended my first ever gig, Metallica at Earls Court in 1996, that I began to seriously get the bug about t-shirts though. I chose a design with the tour dates on the back and wore it proudly everywhere. ‘Yes, I was there’, I’d think and I’d subconsciously puff my chest out! At every gig or festival since, the merch stand is the first place I go, just to make sure I get the design and size that I want.

Then, around 1997 or so, I discovered Cradle Of Filth’s clothing and went mad. I collected as many of their shirts as I possibly could. Aside from loving the band around the ‘Dusk…And Her Embrace’ period, the t-shirt designs were just so damn good. Some were close to the knuckle in terms of language and imagery, but they all had something in common – they were beautifully designed, often witty and were of a super quality. Still living at home to begin with, I was only allowed to purchase the more sedate designs but at University I’m sure my ‘Desire Me Like Satan’ buttered a few people up the wrong way. But that was part of the fun if I’m being entirely honest!

As I have got older, my love for the metal t-shirt has not diminished. Yes, I have sold a few in an effort to make space but I have kept all of my ‘tour date’ t-shirts. They number around 100 and range from Metallica to Machine Head, from Agalloch to Shadow Gallery. These latter two are two of my favourites as they remind me of a couple of my absolute favourite shows.

Other precious examples include my Sentenced, Ozzfest ’98 (my only experience of Pantera on stage) and my Evergrey Gothenburg shirts. There are too many others to mention and I don’t want this to become an ‘I was there’ post, but check out the accompanying photos for an idea. If you’d like me to go into more detail though, just ask and I’ll oblige. 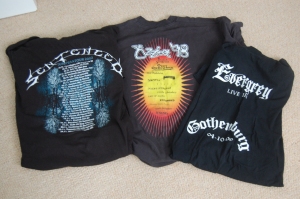 Depending on the shirt that I was wearing back in the day, I’d feel that everyone’s eyes were on me, that I was being judged purely on my appearance. And there was certainly no effort made by anyone to substantiate this judgement; I was wearing a black t-shirt so I was obviously a miserable git, a no-hoper, or downright evil. Suffice to say, I was none of these – just a fan of the music. In fact, my parents would often laugh and say that the only extreme thing about me was my love of extreme music. To some extent, they weren’t that far wrong!

The flip-side of this would be bumping into someone else of a like mind and like wardrobe. Picture the scene – you’re in a public place, probably bored and, out of the crowd, your eye is immediately drawn to another black t-shirt. As you get more practiced, you can almost recognise the band logo from 100 paces. And then, as you get closer, eyes meet, there’s a surreptitious look down at each other’s shirts before a knowing look passes between you accompanied by an almost imperceptible nod of the head, smile or wink. We’ve all been there haven’t we? Even my fiancée is getting more practiced at it, nudging me saying ‘have you seen the Iron Maiden fan over there’. Of course I have, but it’s nice that she’s noticed too.

I also take great delight in checking out all the shirts on display at gigs, seeing who has been where and when. Some I am jealous of, like the 80s NWOBHM tour shirts. Others, I’m not, like a Neil Diamond shirt I once saw at an In Flames gig!

These t-shirts are, however, not always black despite this being the most usual colour. As I’ve got older, I have even sought out t-shirts of differing hues to mix things up a bit. There’s the green Haken shirt, the white ‘Bang Your Head’ shirt or the cream Pain Of Salvation number to pick out but a few. Personally, I wish that bands would offer a wider range of colours, just to be different. Things are getting better, but generally we all still suffer for our art in those rare sunny summer months.

That said, whatever the colour or design, I seriously think I’ll wear metal t-shirts until the day I die. They are just too much a part of me now and I’d not be without them. I lost my hair a few years ago, I’m not about to lose my t-shirts as well.