This has been a very hard blog to write. Even now, as you read this, I’m sure that I’ve already changed my mind a hundred times. However, as I write, these are what I currently consider to be my top 5 albums of all time. Many of you will agree, many more will disagree, perhaps vehemently so. I fully expect that and I look forward to all your comments and suggestions of where I’ve got it right and where I’ve got it wrong.

You will also notice that there are very few ‘new’ albums in this list – this is deliberate. Whilst the likes of Anathema’s ‘Weather Systems’ has blown my socks off this year, I feel that it is a little too early to add it to my ‘all time’ list. In a couple of years, I suspect it will feature, but not yet. Additionally, I have not included live albums or ‘best of’ releases, otherwise ‘Live After Death’ by Iron Maiden or Metallica’s ‘S&M’ may have featured.

So, in no particular order, here goes:

Evergrey – In Search Of Truth

This is, without a doubt, my favourite album of all time for many reasons. I discovered it by accident but this has turned out to be the best mistake I have ever made.

To start with, this is the album that opened the door into progressive metal for me. That alone means I owe Tom Englund and co. a massive debt of gratitude. The songs are not overly progressive in a Dream Theater kind of way, but neither are they simply straight-up melodic metal. Tracks like ‘Mark Of The Triangle’ feature some genuinely complex riffs and tempo changes that engaged me from the outset and made me want to explore more technical forms of music.

The song writing is fantastic and there is not a weak track to be found anywhere on the album. Furthermore, ‘The Masterplan’ and ‘Rulers Of The Mind’ feature strong, anthemic choruses that beg to be sung along with. Naturally, I oblige.

I also love the sci-fi concept that forms a basis for the lyrics. Combined with Englund’s unique vocal delivery and lashings of atmospheric yet subtle keyboard melodies, it creates a very dark, menacing and occasionally sad vibe. Even now, the pleading of the central character in ‘Different Worlds’ gives me goosebumps and, depending on my mood, can bring a tear to my eye.

Put simply, I love this album and, if I could only choose one to listen to for the rest of my life, this would almost certainly be it.

When this album came out in 2001, I disliked it. ‘Hate’ is too strong a word but I certainly steered clear of it for a long time. However, after a lot of nagging and perseverance from my late little brother, something finally clicked.

Initially, I felt that tracks like ‘x’ was too dark and lyrically disturbing whilst sounding just plain odd compositionally. Now though, I love the feelings and images that this track evokes in my mind. What won me over finally however, was the blend of intelligent song writing, eventually catchy melodies and choruses and the unique vocal delivery of Jonas Renske. To think he was a drummer-turned-reluctant-vocalist just a few years before just beggars belief.

Now, I can’t hear ‘Sweet Nurse’ or ‘Teargas’ without being cracking a bitter-sweet, slightly rye smile.

Tyranny is a master class in ‘proper’ technical progressive rock/metal that does not forget about the melody and strong songs. The guitar and keyboard solos are very impressive and dextrous, as are the instrumental passages. However, for my money, they never feel contrived or too over-the-top, instead demonstrating technical prowess without ruining the flow of the compositions.

Even more impressive for me, are the vocals. The sadly-departed Mike Baker is the driving force, but every member of this sickeningly talented bunch can sing. As such, they all lend their vocal chords to create some delicious harmonies, adding an extra layer of technical proficiency to the music.

This is one of those ‘feel good’ albums where I love every single second and play this when I want to be cheered up and entertained in equal measure.

As with Evergrey above, this was one of the albums that got me into a new genre of metal, namely black metal. As discussed in a previous blog, I chose this purely based on the front cover without knowing anything about the band. It was a good move, albeit a lucky one.

Ok, so I admit that this isn’t black metal in the ‘trve cvlt’ sense where the content has usually been recorded in a shoebox with a wasp for company. Instead, this is a lush, keyboard-soaked symphonic brand of the sub-genre where the emphasis is on a mid-tempo grandiose approach, laced with memorable, catchy melodies and soaring atmospherics.

The lyrics do centre on dark, vaguely satanic themes, although for my money, it appears that there’s a definite tongue-in-cheek feel to much of the content.

I suspect that, of all my choices, this will be one of the most contentious. I know that many within metal circles consider this one of the worst, if not THE worst Megadeth album ever recorded. Personally, however, I absolutely adore ‘Youthanasia’.

You will notice a trend now because, as with the Evergrey and Dimmu Borgir albums above, this was the disc that acted as a stepping stone into a new world. I this case, the world of thrash metal. Up to this point, I’d been listening to the likes of Skid Row, Def Leppard and Guns N’ Roses. Admittedly, the fare on this album is not the out-and-out thrash of their earlier records a la ‘Rust In Peace’ for example, but I loved what I heard from the outset.

Big riffs, groove, melodic choruses and some excellent guitar solos – what’s not to like? I would blast this out whilst driving around town and sing along at the top of my voice. ‘I’m addicted t, t, t, to chaos…’!! Superb.

I know, I know, this is number six in a top five. But this is deliberate. I simply couldn’t drop any of these albums from the list – believe me, I tried.

I sat in a café at the Kasteel De Berckt at ProgPower Europe last year as this album was played for the first time. It blew me away. Subsequent listens have only served to further cement my love for this album. I also know that it’s a relatively new album but given the amount of times I’ve listened to it, it feels like I’ve had it years.

This is a truly flawless progressive rock album that veers into metal territory occasionally as well as embracing many other disparate elements, including jazz, world music and even sound effects from computer games. It sounds bonkers and it is. But it works…perfectly.

Best of the rest…

Notable albums that were close to making the top 5 include: Emperor – ‘Anthems To The Welkin At Dusk’, Metallica – ‘Master Of Puppets’, In Flames – ‘The Jester Race’, Vanishing Point – ‘Tangled In Dream’ and Cradle Of Filth – ‘Dusk…And Her Embrace’, although the following photos offer a couple more superb albums! 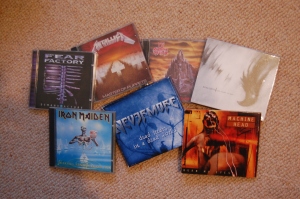 So there you go. This list is only accurate of this split instant in time and is liable to change at any given moment. Let the bashing begin…