Unlucky for some, it is day 13 of my countdown of my 20 best rock and metal albums of 2012. Scroll down to the bottom of this post for links to all 12 previous posts. 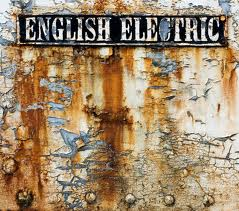 Now, when I say that this has been a massive surprise, I really mean it. In previous years, I had maybe heard a couple of Big Big Train tracks but they’d never really registered anything other than a passing ‘that’s ok’. However, I follow some very wise people on Twitter (you know who you are) and a buzz quickly developed. I was advised to check it out in the strongest of terms but for ages, I resisted, thinking it was just light and fluffy nonsense. One day though, I was really struggling to decide what to listen to and I finally took the plunge. My first spin was a little underwhelming I must admit but there was enough in the music to force me into a second listen. Fast forward to today and all I can say is ‘wow’.

‘English Electric (Part 1)’ is prog rock heaven. It has been likened to Hackett-era Genesis, and to a certain extent, I have to agree, although there are moments that are also reminiscent of Genesis’ later output, albeit fleeting. This record is quintessentially English with a lyrical concept to match. I mean, where else could you hope to hear a track about the flora and fauna to be found in the hedgerows of the countryside?

But, whoever it reminds you of (and there are a lot of reference points throughout), the bottom line is that English Electric is a pastoral and often epic progressive rock masterpiece and I have been hooked on it for months. And that’s even in spite of the wretched brass, which for once doesn’t ruin the whole thing! In a short blog like this, it is hard to do a record like this justice, but trust me – I recommend this most highly.

If you’ve missed any of my previous posts, they can be found here: