We’ve reached the penultimate day in my Top 20 rock and metal albums of 2012 countdown. As ever, links to all my other posts in this series can be found below if you’re new to my blog or have missed any along the way – there’s a good mix of genres I think, so I hope you find something of interest within the list!

And so, without any further procrastination, I give you my choice for the Number 2 slot:

I will make no secret of the fact that Katatonia are one of my all-time favourite bands. However, that does not give them the right to just waltz into my Top 20 list for 2012 and, had this album been poor, it certainly would not have got into the list. Indeed I’d have probably blogged about my intense disappointment. But they did make this list and the fact that they occupy the number 2 slot just re-emphasises to me why they are one of those special bands in my life.

As I remarked in my full review for ThisIsNotAScene, Katatonia are a band that has evolved over their history and are now a long way from where they started. Beginning life as an atmospheric death/doom metal band in the early-mid nineties, over their nine-album career, they have gently morphed into what I now describe as a dark rock/metal band, all the while retaining the essence and the core of their sound somehow intact. This development has naturally left a proportion of their original fans behind but, for the rest of us, it has been a compelling and fascinating journey and one that almost always seems to produce music of the highest calibre. 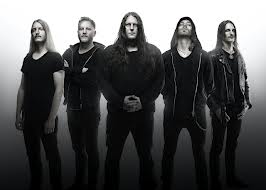 There is an argument to say that ‘Dead End Kings’ is a continuation of where Katatonia left off after the highly lauded and decorated ‘Night Is The New Day’ as there are a number of similarities between the discs. However, to leave it there would be somewhat disingenuous because once again, Katatonia have refused to stand still musically.

The heavy, dense and powerful guitar tones remain on ‘Dead End Kings’, as do those utterly beguiling and completely unique vocals of Jonas Renkse. The guy has got to be in my top 3 vocalists of all time without question.

Putting the similarities to one side however, this album feels slightly more progressive in terms of some of the compositional structures and there is also an increase of post-rock and shoegaze elements which seem to blend seamlessly into the songs. As with ‘Night Is The New Day’, keyboardist Frank Default has been asked to contribute but this time, he has chosen a more orchestral approach to compliment his more modern-sounding embellishments. Personally, I love the richness that this brings to the album and feel it is one of the big strengths of ‘Dead End Kings’.

All of this counts for nothing though if the compositions themselves are not up to the requisite standard. But this is Katatonia and so there are no wasted notes, no weak sections whatsoever and each of the eleven tracks stands up to close scrutiny with apparent pride and justifiably so. To be honest, I could go on for days about this record, but I won’t. Instead, aside from the adjective ‘stunning’, I’ll let it’s positioning in this list speak for itself and leave you to check out the sound samples below and reach your own conclusions.

If you’ve missed any of my previous posts, they can be found here: