Welcome one and all to Day 4 of my ‘Album of The Year 2013’ countdown. I hope you’re enjoying and/or agreeing with my choices so far. 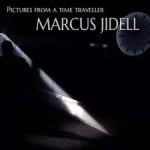 I’m not normally a fan of instrumental albums. Generally, I find them either boring or over-indulgent. In the worst cases, they can be a disastrous combination of both. And yet, here we are, on day 4 of my ‘Album Of The Year 2013’ countdown and the subject of today’s post is an instrumental album. I didn’t see that coming I can tell you. But then, this album is rather good!

With this debut solo effort, the former Royal Hunt and Evergrey guitarist Marcus Jidell has proved that he is one smooth performer with his chosen musical weapon. On ‘Pictures From A Time Traveller’, the six-string is king but crucially, not at the expense of anything else. Sure there are solos, licks and riffs littering the record but they all have their place, never do they outstay their welcome and they are beautifully executed.

What I like so much about this album is the variety that Jidell demonstrates. One minute he is ripping out a powerful full-on metal riff, the next he’s coaxing out some beautifully soft notes or indulging in a bluesy groove. Jidell’s playing on this album is really very expressive and surprisingly emotional at times. It is this coupled with some strong song writing that makes this album the success that it unquestionably is.

Should you require further convincing, you can read my full in-depth review of the album here. But for now, I’ll leave you with another example track from this highly enjoyable record.