Welcome to my quick run-down of those albums I’m looking forward to being released in the latter half of 2014. I’ve already gone into some detail about the album that I’m most looking forward to, Evergrey’s ‘Hymns For The Broken’, but there are plenty more albums that are high on my radar. Want to know what they are? Then read on! 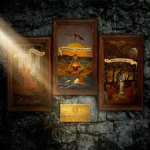 I have to confess that this is an album that I have already heard and reviewed for Powerplay magazine. Nevertheless, I’m looking forward to holding the finished article in my hands. It isn’t an album I had held out great hope for having failed to be enthralled by any of the Opeth back catalogue up to now. However, this is the album that means that I finally ‘get’ Opeth and understand why so many people hold them in high regard. Stylistically similar to ‘Heritage’ and ‘Damnation’ occasionally, it also throws a few nods to the band’s heavier past. 70s and 80s-inspired progressive music at it’s very best.

Here’s a track from the forthcoming album, ‘Pale Communion’:

Threshold – For The Journey

A new album from one of the most highly-regarded and consistently brilliant UK-based prog metal bands? Well, ok then, if you insist. Threshold’s stock has been rising over the past few years but when you release such excellent albums, it’s hardly surprising. ‘Critical Mass’ remains a firm favourite but more recent output has offered fans some of the most subtly complex yet anthemic and damn catchy music that the genre has to offer. High quality and professionalism comes as standard.

Check out this track from previous album, ‘March Of Progress’:

I have always been a fan of arguably the biggest and most commercially-successful band to come out of the Swedish city of Gothenburg. Beginning life as all-out melodeath, the band’s sound has gently and subtly morphed into something different, something altogether more modern. Many argue that there is a melodeath core to In Flames’ more recent output and perhaps they are right. But it doesn’t really matter if the output is high on quality and the music is enjoyable. That’s certainly always been the case with In Flames and, whilst I’m left feeling a little underwhelmed by the lead single that has been recently released, I remain interested in the release of ‘Siren Charms’ and still class myself as a staunch fan of the band.

Sanctuary – The Year The Sun Died

Whilst Sanctuary pre-dated Nevermore, it is fair to say that there is as much interest and excitement over this release from Nevermore fans as from original Sanctuary fans. Indeed, many of us are one and the same. When news greeted us that Nevermore were calling it a day, there was a great deal of sadness in the Mansion of Much Metal because I regarded them as one of the very best and a firm favourite. However, news of a new Sanctuary album, their first since 1989, has softened the blow somewhat. I have sorely missed Warrel Dane’s vocals, but it’d not long until we have new material fronted by one of the most unique voices in heavy metal.

THis following clip will give you an idea of what to expect from ‘The Year The Sun Died’: