Now that Christmas is over for another year, it’s about time that I got back on with my Album of the Year 2014 countdown. Despite my best efforts, a growing family and fatherly responsibilities have meant that I’m unlikely to complete the full list before the end of the Year. But hey-ho, it’s the thought that counts and I shall plough on regardless thanks to all the positive comments and feedback I’ve received to date.

As always, if you’re late to the party and need or want to catch up on the posts in this year’s countdown to date, the links can be found at the bottom of this post. So can links to my 2012 and 2013 lists.

But back to the main event and my choice at Number 11:

At The Gates
‘At War With Reality’
Century Media Records

A few years ago, an appearance in one of these year-end lists from At The Gates would have been unthinkable. One of the original and best bands within the melodic death metal scene, one of a handful that helped to create the ‘Gothenburg Sound’, called it a day in 1995, bowing out after the release of arguably one of the finest albums that the genre has to offer, the absolute classic ‘Slaughter of the Soul’. this near perfect tour-de-force as their final hurrah in that same year meant that their status has become near-legendary over the intervening period, with thoughts of a reunion merely a fervent pipe dream amongst fans. And then, in 2008, At the Gates reformed for a handful of farewell shows. I was at Bloodstock for one of those emotional and electric performances. 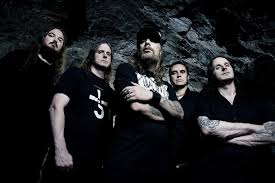 Within the past year, as the live shows increased in frequency, we began to dare to believe and, at the tail-end of 2013, we were greeted with the news we all craved: a new album was in the making. I interviewed Tomas Lindberg this year and playfully asked for my money back on the ‘farewell’ t-shirt I bought at Bloodstock. The truth is, is don’t really care about that because a new album is far more exciting.

The excitement prior to release was, however, tinged with a certain nervousness I must admit because I hoped a new record would not damage the reputation of At The Gates. Would it live up to the hype and the impossibly high expectations? I needn’t have worried though.

‘At War With Reality’ is every inch the album that it needed to be. It isn’t a ‘Slaughter of the Soul’ copycat and neither is it the natural follow-up to it either. What it is, is a great blend of old and new, both paying homage to their past and accepting that the landscape of extreme metal has changed over the past couple of decades. The riffs are naturally the bedrock upon which all else sits and on this record, they’re a big winner – they are really strong, powerful and downright filthy, everything you want from At The Gates.

Personally, I can hear echoes of all of the band’s past endeavours from the early, more experimental days of ‘The Red In The Sky is Ours’ to the more straight-up groove-laden intensity of ‘Slaughter of the Soul’, all topped off by the unmistakably caustic yet intelligent bark of Tomas Lindberg himself. The melodies are there but are wonderfully understated and the whole thing feels right if I can say that; its neither contrived nor forced and it’s certainly relevant for 2014.

Put as simply as I can, ‘At War With Reality’ is a passionate, vital and hungry-sounding album that proves to anyone that ever doubted it, that At The Gates remain one of the most influential, talented and inspired bands in the world of melodic death metal.