Here we are at the top 10 in my Album of the Year 2014 countdown. In many ways, the choices from 20-11 are a little arbitrarily placed and the positioning is less important. They deserved a place in the top 20 and so they featured. With the top 10, I have been more careful with the placements and the order that I have chosen. Believe me, the following 10 albums have been thought about long and hard and the positioning has altered on an almost daily basis. However, I’m finally content.

Before I continue, just a reminder that numbers 20-11 can be read via the links at the bottom of this post, alongside links to the full 2012 and 2013 lists.

And with that, here goes nothing as I begin to reveal my top 10. At number 10: 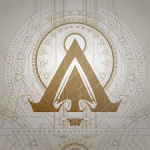 I have followed the career of Amaranthe ever since I was given their debut album to review for Powerplay a few years ago. I wasn’t immediately struck with the music if I’m honest but over the years I have warmed to Amaranthe a great deal to the point where I highly respect the band and love this new album, their third.

Firstly, the members of the band are really genuine and lovely people; a stint on their tour bus alongside Evergrey confirmed that point early on. And the conversations I have had with Olof Mörck over the years demonstrate that here is a bunch of musicians who are hard working and totally dedicated to this band. It gives Amaranthe the credibility to go alongside their music.

Speaking of the music, I will suggest that whatever style of rock or metal you’re into, you’re going to like Amaranthe. Whether you want to or not. You might consider it a guilty pleasure and admit it to no-one or you may embrace it fully. I fall somewhere between the two.

There’s no denying that Amaranthe have all the gimmicks in place to mean that they should be successful. Three vocalists including a growler, clean male singer and a beautiful female with a sensational voice provide the U.S.P. to enable them to grab the eye immediately. Then there’s the compositional nous, which is very strong indeed.

Musically, it must be said that the album title says it all really; this is massively addictive music. Every track has a big hook, giant melodic line or epicly anthemic chorus that grows with every listen and begs to be listened to again and again. And whilst the album has a thoroughly modern sheen to it thanks to a highly polished production, electronic effects and a downtuned chunky guitar tone, there’s a precision to the songs and a genuinely subtle complexity.

There’s no denying that Amaranthe offer a heady shot of ear candy but the music is also surprisingly heavy, the drumming of Morten Løwe Sørensen and the strong, clever riffs of Olof Mörck setting the pace on what is, without doubt a bona fide heavy metal album with bite.

‘Massive Addictive’ is in my top 10 for one main reason however: the album is consistently entertaining, extremely professional and of a high quality throughout. It’s a ‘go to’ record when I want a shot of instant musical gratification. On that score, few bands around today can touch Amaranthe – they’re in a league of their own right now.