A few years ago, you’d be hard-pressed to name a single hard rock or heavy metal band from Israel. Today, it’s quite different. Alongside Orphaned Land and Distorted Harmony, I can now add Melechesh to the list. Admittedly they’ve been based in Amsterdam since 1998, but the roots of Melechesh burrow back to Jerusalem where the band was created as long ago as 1993. Created in the early 90s by the band mastermind and multi-instrumentalist Ashmedi, Melechesh was created to explore a style of music which sought to blend extreme black metal with authentic Middle Eastern influences. The birth of Melechesh therefore led to the creation of self-proclaimed ‘Mesopotamian Metal’ or ‘Sumerian black thrashing metal’, so named because of the Assyrian and occult-based themes explored within the extreme metal framework.

Fittingly then, the album title follows a similar theme. In Sumerian mythology, Enki is the God of crafts, namely mischief, water and creation. And it’s an apt title as well, given that this is such a striking creation. Mind you, ‘Enki’, the sixth album from Melechesh was a slow-burner but after a lot of effort on my part in the beginning, I have grown to really like this record.

Some people in the past have rather disingenuously dismissed Melechesh as a Nile clone, due to the blend of extreme metal and ethnic instrumentation. But, try as I might, I can’t really hear the similarities; Nile are brutal death metal at their core whilst Melechesh offer more of a black metal approach with plenty of thrash embellishments to compliment their sound. Melechesh are therefore very much their own band with their own identity as far as I’m concerned. 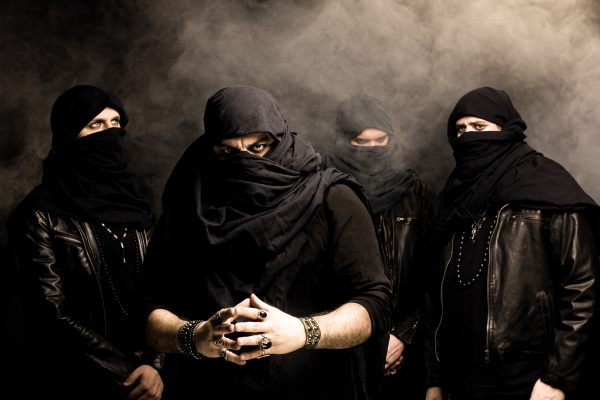 The album opens in typically savage and uncompromising style in the form of ‘Tempest Temper Enlil Enraged’. A six-plus minute track, it is one of the most black metal-centric compositions that ‘Enki’ has to offer. It is chock full of lightning-fast drumming from returning member Lord Curse and the riffs are fast-picked staccato monsters. And yet, despite the snarling growled vocals and relentless brutality, it packs a certain groovy punch too, which helps to regulate the pace and keep things entertaining.

Following hard on the heels of the opener is ‘The Pendulum Speaks’, a shorter track that takes an Eastern melody and wraps it up in a really powerful foot-tapping tempo. The snarled vocals are still front and centre, as is the impressive rhythm section but it’s the mid-tempo stomp that gets my head nodding in appreciation, allowing the strength of the 12-string guitars to take full effect. At times I’m even reminded of early Sepultura, it’s that damn huge.

And therein lies the strength of Melechesh and ‘Enki’; the ability by the band to pen music that is authentic to its Middle Eastern roots without sacrificing any of the brutality or extremity in the process and, if anything, making those Middle-Eastern influences an integral part of the music without which, the essence of Melechesh would conceivably be lost.

‘Enki’ is an album best enjoyed as a whole but even so, there are a few highlights worthy of particular mention. Firstly, there are the guest appearances from Max Cavalera (Soulfly, Killer Be Killed, The Cavalera Conspiracy, ex-Sepultura), Sakis Tolis (Rotting Christ) and Rob Caggiano (Volbeat, ex-Anthrax).

And then there’s the music itself. ‘Enki Divine Nature Awoken’ is a gargantuan track that’s groovy as hell but also epic in its scope. Ushered in by some quiet ethnic instrumentation it soon explodes into the mother of all mid-tempo riffs, heavy enough to crush all within its path. It’s also quite sinister in tone thanks to its sheer relentlessness and the dark chanting towards the end.

‘Metatron And Man’ is a frenetically paced number that thunders along and reminds me a little of Dissection in its execution. Then there’s the somewhat cheeky, hard-rock stomp of ‘The Palm The Eye and Lapis Lazuli’ that has to be one of the most catchy extreme metal songs I have heard in a long time. Authentic instrumentation comes to the fore courtesy of ‘Doorways To Irkala’, a composition that’s darkly hypnotic and a welcome change of pace from the onslaught that has gone before it.

The album then closes with another epic track in terms of both length and ambition, in the shape of ‘The Outsiders’. The central riff is relatively simple but effective in its bludgeoning strength but even so it threatens to be dwarfed by everything going on around it, such is the breadth and depth of the music on offer.

There are one or two less than stellar moments within ‘Enki’ and arguably, the end result is not wildly different from their past efforts. However, if what you’re looking for is an album that will bludgeon you with power and brutality but that also has an intelligent underbelly, willing and capable of treading a slightly different path from its contemporaries, then I highly recommend Melechesh and ‘Enki’.