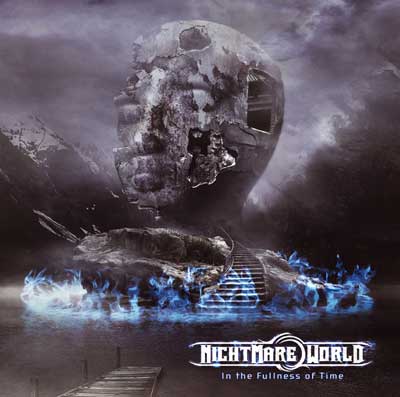 Album Title: In The Fullness Of Time

Now this is exactly the kind of album that I want to feature on the Blog Of Much Metal; a strong record that deserves attention but which might not get the exposure it fully deserves. To be honest, had it not been for the inclusion of a certain musician that I follow via social media, it may never have even registered on my radar either. Thankfully it has because the music is too good to be overlooked and not brought to people’s attention.

By way of a bit of background, NightMare World are a British-based band, that came together with one sole aim, to create powerful, dynamic heavy metal. Comprised of guitarists Sam Shuttlewood and Joe Cleary, bassist David Moorcroft, keyboardist Nick Clarke and drummer Billy Jeffs. Oh and on vocals, the band features Pete Morten, that chap who plays guitar in Threshold and who is the singer, guitarist and principal song writer with My Soliloquy. ‘In The Fullness Of Time’ is the debut album following a well-received EP back in 2009 by the name of ‘No Regrets’. I reckon that, by now, I have the full attention of many, so let’s crack on.

I don’t think that the members of NightMare World will take too much offense if I suggest that the content of ‘In The Fullness Of Time’ doesn’t set the world alight in terms of out-and-out originality. Theirs is an approach that is relatively familiar in that it offers melodic power metal with lashings of synths and the odd foray into prog territory. However, crucially, where NightMare World really deliver and show their quality is in the song writing stakes. When it is well written and presented, this kind of music can be the kind of tonic that is infectious, addictive and something that will plaster a big smile on the listener’s face. This is exactly what NightMare World do and they should get great credit for it.

Benefitting from a great production job courtesy of Karl Groom (Threshold) and the mastering of Peter Van’t Riet (Symphony X, Transatlantic), there are many ingredients littered throughout ‘In The Fullness Of Time’ that combine to great effect. First up, each member of the band can really play their instruments. Everything is executed well, with a clarity and sureness of purpose to ensure that the compositions hit the mark from the very first note. The guitar tones are very nice; crunchy and crisp to accentuate the riffs and to play a perfect counterpoint to the softer keyboards that dip in and out with subtlety but also come to the fore occasionally via a well-placed solo or grand atmospheric sweep. The rhythm section lays a solid foundation with the drums in particular packing a punch. The progressive elements are not overplayed, meaning that the songs are never compromised by an ill-judged foray into overindulgence. This latter point is underlined by the fact that the album is a very succinct affair, with the nine tracks lasting for a total of 38 minutes. It means that NightMare World do not outstay their welcome; quite the opposite in fact. The band get in, do their thing and get out, meaning you’re left wanting more as the final notes fade.

And then, inevitably, there are the vocals. Those familiar with My Soliloquy will already be conversant with Morten’s delivery. Once heard, never forgotten. His delivery may be in the higher-pitched ranges but they remain powerful and never veer into screechy territory. Morten’s phrasings are always interesting and coupled together with his range, top the songs off in a very positive manner and help provide that je ne sais quoi that all bands need. With a vocalist like Pete Morten, there’s always the danger that he could have stolen the show and plunged the remainder of the band into the shade. The great thing is this never happens, such is the all-round quality on display.

In terms of my favourite moments on the album, I have to point initially to ‘In Memoria Di Me’. After the cinematic instrumental opener of ‘The Mara’, it wastes no time in delivering an up-tempo and groovy riff atop some sumptuous keyboards that maintain the theatrical feel. It then opens up into one of the best choruses on the album, a real earworm as I’ve discovered over the past few days. The slightly more melodic hard rock stylings of ‘Burden Of Proof’ are very welcome as are the quieter, darker and more brooding tones of ‘The Ever Becoming’. ‘The New Crusade’ is out-and-out power metal joy but the best is arguably saved for last in the shape of the closer, the truly epic and grandiose ‘Euphoria’ which is a part cinematic and part metal anthem.

In closing therefore, if you’re after a professional, highly competent and fun dose of melodic metal with prog touches, let NightMare World into your life.