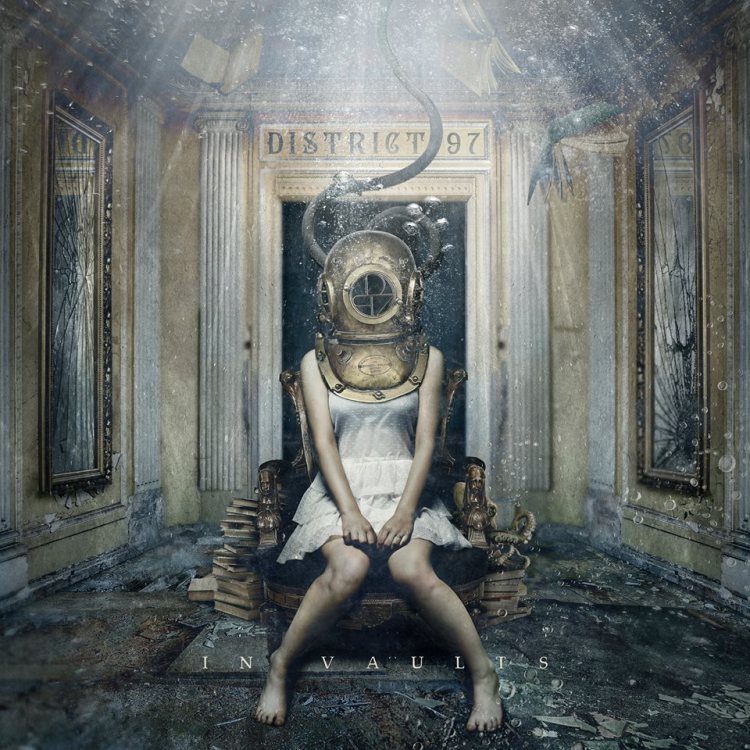 How long do you give it before you give up on an album? One spin? Five? More? As a reviewer and a lover of music, it’s one of those difficult conundrums for which I don’t believe there’s a cast-iron answer. I think, personally, you need to give an album a fair chance but it depends on many factors. If it’s plain bad and I’m certain that it’s simply awful, I tend to dismiss it pretty quickly. Frankly, I don’t have the time for rubbish. If it’s not to my stylistic taste, I bear with it a little longer in order to be objective. But it’s those albums that I feel I should like, or I feel have something about them where it’s tough to know where to draw the line.

In the case of ‘In Vaults’, the third album from Chicago-based progressive metal band District 97, I have invested an inordinate amount of time in it but, crucially, it has been time well spent. I’ll be honest and admit that, on the first spin, I didn’t like the music at all. I felt that the album was too impenetrable and offered little in the way of stand-out material. I was on the verge of shelving the disc at this point. However, knowing of the band and liking elements of their previous effort, 2012’s ‘The Trouble With Machines’, I felt I had to have another try. On the second spin, I didn’t change my opinion much at all though, except to acknowledge that the material was well played and the production lent the music an air of quality.

These chinks of light, alongside my stubbornness, were enough to convince me to persevere. I knew that there was almost certainly something within this album that meant I had to give it another go and eventually, after about five or six spins, it finally all began to fall into place, just when I was on the cusp of shelving it for a second time. With some albums, it’s almost like a switch is pressed and suddenly the enjoyment floods through you. Not so here; it has been more of a gradual seeping into the subconscious to a point where I now find myself humming the melodies of a certain track or nodding along to an interesting riff or vocal line. I think the term ‘grower’ was invented for an album like this.

The first thing to say is that District 97 do not sound like anyone else. There are hints of others here and there, most notably Madder Mortem in terms of Leslie Hunt’s vocal delivery and perhaps prog newcomers Maschine or To-Mera in some of the wider song structures. I even hear occasional fleeting echoes of Haken which is nice. But essentially, District 97 have cultivated their own sound, for which they should rightly be applauded. Their brand of progressive rock/metal blends a myriad of styles into a cohesive whole, including rock, pop, jazz, fusion, even a smattering of classical and more extreme metal. As I’ve explained at length, it’s not an immediate listen but give up as I nearly did and you’ll miss out on something truly marvellous as District 97 seek to explore avenues and ideas that many of their contemporaries either shy away from or perhaps hadn’t even considered.

‘Snow Country’ opens the album and it really does a great job at setting the tone of the record. It flits from idea to idea with the kind of smoothness that belies its complexity. There’s a slightly discordant feel about the plodding central riff from guitarists Rob Clearfield and Jim Tashjian which frequently goes off on strange tangents and which shares the limelight with gentle piano-led moments of quiet contemplation. And, what was an initially underwhelming chorus of sorts develops into a real earworm that delights upon each subsequent airing.

Follow-up ‘Death By A Thousand Cuts’ is built around an odd and challenging time signature, accentuated by some really great and flamboyant drumming courtesy of Jonathan Schang. There are flashes of melody within the stop-start song but the show-stopper is the heavy, groovy riff that’s introduced at the halfway mark and the seriously off-kilter monster that all too briefly closes the composition.

‘Handlebars’ manages to blend some of the most immediate keyboard-led melodies with some of the most ambitious and eclectic ideas on the record, including a range of classic 70s prog-inspired keyboard sounds and solos within the complex track. ‘A Lottery’ is arguably District 97 at their most melodic and accessible. It is dominated by Hunt’s rich and emotive vocals which sit atop a song that’s equal parts prog and pop. What I love about this track and in fact, the album as a whole is Clearfield’s sumptuous keyboard sounds, principally the piano which adds a touch of understated class to proceedings.

It seems a little bizarre that having not liked the album at all at first, I could happily wax lyrical about each of the nine tracks on offer on ‘In Vaults’. There’s genuinely something to enjoy on every composition and to not mention each individually seems a little unfair. So I will.

‘All’s Well That Ends Well’ begins very gently in almost dreamlike fashion, led by yet more lovely piano work. The composition gradually builds throughout its length and in so doing, leaves the listener in no doubt as to the musicianship and instrumental prowess of the quintet, not to mention their impressive songwriting skills. The melodies are slow burners but work their subtle magic with perseverance.

‘Takeover’ is, alongside ‘Handlebars’ arguably the most immediate but it also showcases some of the heaviest sections on the album. The guitar displays a real crunch and the drumming and bass work courtesy of Patrick Mulcahy feels more in your face and confrontational. ‘On Paper’, by contrast, actually has a slightly country feel to it, especially in the quiet introduction. And, despite a heavier, more rock-flavoured chorus and brief foray into thrash metal territory at the mid-point, it remains my least favourite track on the record to date. ‘Learn From Danny’, one of the longest tracks on the record, swiftly follows and opens with some ethereal vocals from Hunt. In keeping with other compositions it steadily builds in intensity and in terms of the layers that are injected before culminating with a really beautiful neo-prog-esque crescendo that’s full of warmth and majesty.

The album closes with ‘Blinding Vision’, a double-digit epic composition that ebbs and flows throughout its extended length. Rarely accelerating beyond a slow-to-mid tempo, the song introduces a really nice duet between Hunt and Tashjian and plays around with minimalist ideas and atmospherics, particularly in the mid-section where everything drops away except Schang’s cymbals, leading to a very introspective and intriguing post-rock sounding conclusion to the album.

In short, ‘In Vaults’ is a challenging and complex listen but one that greatly rewards patience and perseverance. It comes with a huge recommendation for open-minded fans of original and professionally-executed progressive music. Very well played District 97; very well played indeed.