It’s only mid-January and already I’m confronted with an album that has well and truly put the cat amongst the proverbial pigeons. The enigmatic and evergreen Borknagar have released what I consider to be their magnum opus. ‘Winter Thrice’ is nothing short of magnificent, a triumphant album full of almost flawless music. You think I’m kidding? You think I’ve begun this review with unnecessary and frivolous hyperbole? Just wait until you hear this beast an then tell me I’m overstating things.

Borknagar are one of those bands that have been blessed by a strong and dedicated, cult-like fan base. The pay-off is that the loyal followers seem to scrutinise every move that the band makes, dissecting every detail along the way. As such, and rightly so, there are some strong opinions out there, with some fans praying for a return to the black metal-heavy early days, whilst others long for ‘Empyricism’ part two. That 2001 release is hailed by many as being the Norwegian’s greatest album and so the hope for a return to this exact style is not unexpected.

One day, this may happen but whilst Borknagar continue to evolve and grow as a band and as musicians, it is unlikely. That said the output throughout Borknagar’s career hasn’t ever been wildly different, certainly not to these ears anyway. Yes there has been a gradual increase in the progressive aspect and the folk elements have tended to play an ever-increasing role but at its heart, the music remains extreme, black-tinged metal of the very highest order. Can you name any album within the Borknager back catalogue that is anything other than excellent? No, me neither. And that’s probably why the fan base is so strong.

But back to the main event, ‘Winter Thrice’, and the first place to start with this record has to be with the vocals. Most bands would kill for a world-class singer but in Borknager circa 2016, there are four. Vintersorg handles the majority of the harsh parts whilst keyboardist Lars A. Nedland (Solefald) and bassist ICS Vortex (Arcturus, ex-Dimmu Borgir) contribute their own beautifully unique clean deliveries. And then, to top it all off and to coincide with the 20th anniversary of Borknagar’s debut self-titled album, Kristoffer ‘Garm’ Rygg, he of Ulver fame, is welcomed back into the fold having departed in the late 90s following the release of ‘The Olden Domain’. Suffice to say that these four artists blow me away time and again throughout ‘Winter Thrice’, enhancing the music at every possible opportunity.

Completing Borknagar is the founder, brainchild and guitarist Øystein G. Brun, lead guitarist Jens F. Ryland and drummer Baard Kolstad (Leprous, Rendezvous Point). And kudos has to go to each and every member for playing a full and vital part in helping to shape this spectacular record. 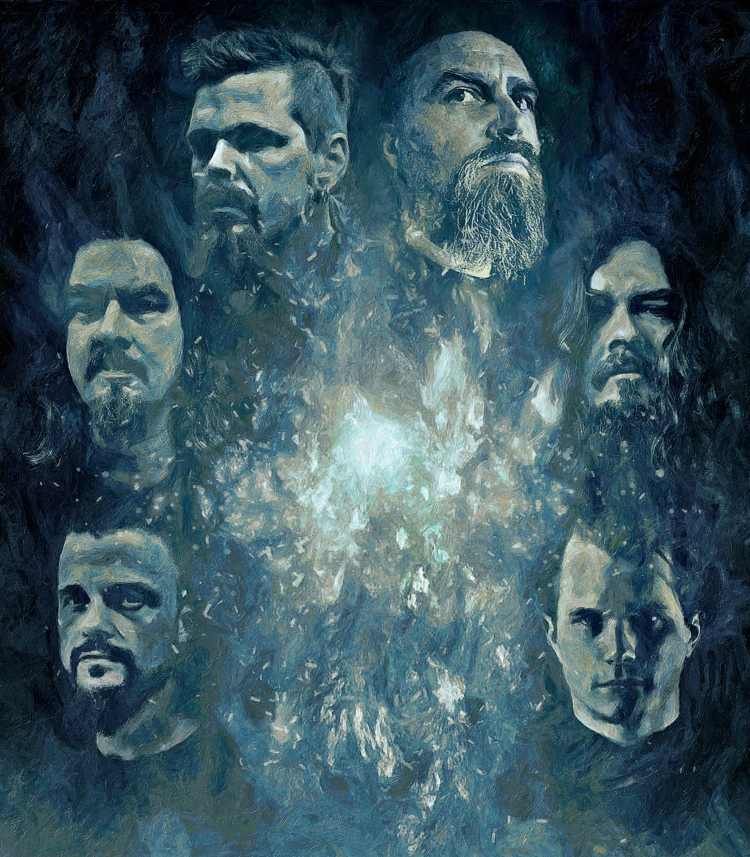 ‘Winter Thrice’ opens with ‘The Rhymes Of The Mountain’, an absolute behemoth of a song in every respect. After an understated choir-led intro, the listener is confronted by a frenetic but pinpoint accurate blast beat accompanied by a vital and razor sharp riff. The track then soon opens up to allow a little room for some quieter atmospherics and a delightful melody enhanced by some superb clean vocals. I love the ebb and flow, the textures and the pulsating nature of this song, made all the more striking by a brilliantly clear and powerful mix courtesy of Jens Bogren (Fascination Street Studios). It leaves me breathless and wanting more.

Happily, my wish is granted and next up, the title track is, if anything, even better. In fact, it is a track with which I am completely obsessed. Again, the blend of extreme metal and folk with more progressive elements is something very special indeed. Nedland begins the vocal content before ICS Vortex takes over briefly. And then, in between bursts of controlled savagery and atop a groovy, mid-tempo and intensely melodic chorus of sorts, Garm takes over to deliver an utterly beguiling vocal performance. It is full of passion, surprising subtlety and not a little sorrow too. As is the Borknagar way and in keeping with the themes of the entire record, it is a song about the natural elements. As the name suggests here though, the focus of ‘Winter Thrice’ is the harsh and unforgiving face of winter. I have listened to this track on repeat more times than I care to mention and my conclusion is that it is about as perfect a composition as it is possible to achieve. Could this be the song of the year? It’s perhaps too early to say but everyone else will have to produce a slice of magic to beat it.

The fervent hope of course is that after such a powerful beginning, the album doesn’t then start to fall away. Fortunately, there’s no chance of that – this is Borknagar after all. ‘Cold Runs The River’ features an almost cheeky riff before the blast beats return. Vocally, Nedland takes the lead over what is a surprisingly buoyant and groovy number that features a great guitar solo and a myriad of different and subtle ideas. This track just underlines, if such a thing was necessary, how technically gifted and on-point this sextet are as a group.

‘Panorama’ is another real head-turner, a more experimental number that pushes the folk and progressive elements to another level. Swathes of keyboards dominate the song but in a way that evokes the prog rock of the 70s and creates some really warm and inviting textures. I love the rumbling bass and captivating drum beats in the mid-section before the song goes on to soar with yet another sumptuous up-beat melody. The folk-inspired embellishments are nicely quirky but in an understated way and everything combines wonderfully to create a cohesive and thoroughly engaging piece of music.

‘When Chaos Calls’ begins with a vibrant piano flourish before launching into more frenetic blast beats reminiscent more of Borknagar’s early days. Nedland once again shines behind the mic crooning above yet another soaring melody and I absolutely adore that Borknagar trademark dampened guitar ‘chug-chug’ that creeps into this song. It is always used sparingly but for some reason, it brings a smile to my face every time I hear it.

Borknagar show their early black metal roots most obviously on ‘Erodent’ before the song plunges into a quiet and atmospheric abyss at the half-way point. As the track begins its ascent, things turn much more progressive in nature, albeit underpinned by the ubiquitous pummelling drums. The melodies on this track are a little more subtle, thereby turning the track into a real grower that gets stronger upon each listen.

The shortest track on ‘Winter Thrice’ is ‘Noctilucent’. A word used to describe certain cloud-like phenomena, it is perhaps fitting that this track has a lighter, floatier feel to it, complete with a clean guitar solo and yet more layers of synths to create a lovely dreamy façade.

And then, seemingly in the blink of an eye, ‘Winter Thrice’ is brought to a close by ‘Terminus’. It opens in almost cacophonic fashion, bristling with almost uncontrolled fury. However this brutality is then juxtaposed with some of the most immediate melodies on the album again joined wonderfully with Garm’s smooth and heartfelt vocals. Together, they combine to ensure that the album ends on a positive and thoroughly edifying crescendo full of aural beauty and majesty.

I’m not sure what’s left to say about ‘Winter Thrice’. It is a sensational slab of intelligent, powerful and sophisticated extreme metal that is as beautiful as it is brutal. I have been captivated since the first listen and I cannot see how the spell that Borknagar has cast upon me can be broken. Mind you, I don’t want it to be broken. This is a near perfect aural experience and I am all the richer for having it in my life.