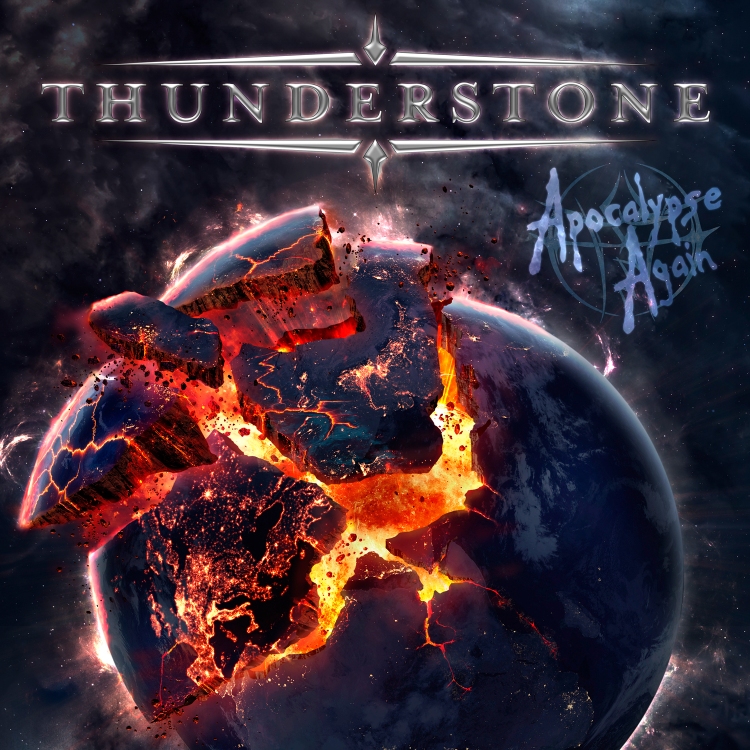 The Blog Of Much Metal seems to have been inundated with albums that have a strong power metal influence recently. Arguably however, this is the most straight-up no-nonsense power metal record of them all. And it comes in the form of the sixth full-length album from Finland’s Thunderstone, a band that I have been aware of for a number of years since the release of ‘The Burning’ back in 2004.

It has been six long years since the quintet last released a studio album but more importantly, it is the first in a decade to feature original vocalist Pasi Rantanen who initially left after the release of ‘Evolution 4.0’ in 2007. And, on the basis of ‘Apocalypse Again’, it would appear that their returning vocalist has brought with him a renewed hunger and desire that has permeated the entire band.

‘Apocalypse Again’ bursts out of the gates in impressive fashion thanks to an energetic and fast-paced opening number in the form of ‘Veterans Of The Apocalypse’. Together, the quick tempo, flamboyant keyboard and guitar lead solos and rousing chorus make an impressive statement of intent, leaving a pleasant taste in the mouth, nicely whetting the appetite for the remaining eight songs.

‘The Path’ follows and after a keyboard-heavy and rather grandiose opening, it settles into more of a mid-tempo chug throughout the verse only to open up into another big hook-laden chorus via a darker, more theatrical bridge. ‘Fire And Ice’ is dominated by some lush keyboards courtesy of Jukka Karinen and another immediate chorus which shows off Rantanen’s vocal skills to great effect.

What I really like about Thunderstone on this record in particular is that they are not afraid to bust out the keyboard solos and more often than not, let them duel with the lead guitar of Nino Laurenne. Whether or not it was a deliberate act on the band’s part, the upfront and undiluted keys nevertheless create a slightly old-school feel to the material as well as an element of fun and devil-may-care attitude which I really like.

Back to the songs themselves and ‘Through The Pain’ is slightly slower, almost ballad-like with an absolutely huge chorus and more of a melodic hard rock sheen. It’s a really storming track and one of my favourites on the record. Not for the first time, I’m reminded of Jorn Lande in Rantanen’s delivery, not that this is a bad thing by any stretch of the imagination.

With only nine tracks making up ‘Apocalypse Again’ it is important that there are no fillers and that every track offers something of value and worth. On that score, it is good news as this is a remarkably consistent album with barely a let-up in quality throughout. ‘Fire And Ice’ is reminiscent of Masterplan at their best with another brilliantly infectious chorus and driving rhythm from drummer Atte Palokangas and bassist Titus Hjelm whereas ‘Wounds’ features some really tasty riffs during a song that’s delivered in full-on attack mode at 100 miles an hour.

One of the big strengths about ‘Apocalypse Again’ aside from the songs themselves is the production, which packs a real punch and ensures that all instruments are clear and possess the necessary power. The real winner however, is the muscular and bruising rhythm section, the drums in particular catching the ear.

‘Apocalypse Again’ is an album that gets better with each and every listen. It is addictive, infectious and powerful. It has been a long time coming, but the wait was worth it as a rejuvenated Thunderstone have returned with one hell of a bang, producing a slab of impressive and expertly crafted power metal in the process. Highly recommended.