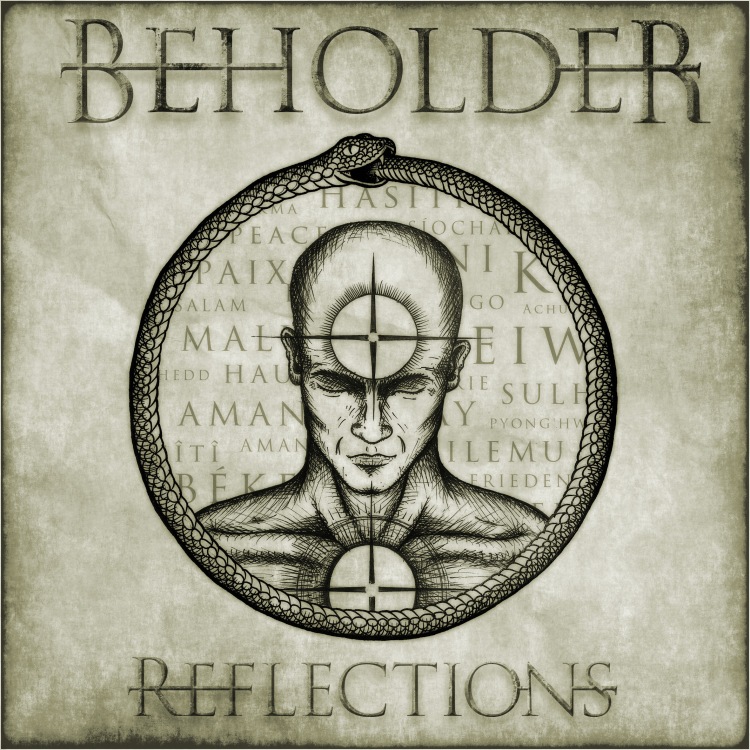 If I had to sum up the music of UK metal band Beholder in four words, my instant reply would be: ‘heavy, uncompromising, honest and intense’.

‘Reflections’ is the Coventry/Leicester-based metallers’ third full length recording over a career that has spanned over a decade. Up until now, the name Beholder has almost exclusively been the preserve of the metal underground, as the quartet have diligently and tirelessly built up a name for themselves with the grass roots of the genre. However, I have a strong hunch that ‘Reflections’ might just elevate Beholder into a whole new level over the coming year or so.

I’ve never been the biggest fan of Beholder over the years but something told me that I had to check out this record when the promo dropped into my inbox. In the past, my instincts have generally served me well and this is another prime example of my sixth sense coming up trumps.

Beholder 2016 is comprised of vocalist and band mastermind Simon Hall, guitarist/vocalist Scott Taylor, bassist/vocalist Si Fielding and drummer Chris Bentley. Together, they have created a properly heavy, snarling beast of a metal record that should, if there’s any justice in this world, bring a greater level of success and notoriety.

‘Reflections’ has many individual strengths within its ten compositions such as muscular riffing, a powerhouse rhythm section, passionate socially and politically-driven lyrics delivered with utter conviction in a variety of styles and a surprising amount of melody. However, the biggest strength of all is the way in which all of the ingredients have been blended together. None of the individual elements are overused or overworked and they certainly don’t get in the way of the overall Beholder aim, which I can only assume is to create a quality and properly heavy metal album.

Personally, I hear echoes of Nevermore and early Mastodon as well as elements of djent and the heavier end of the progressive metal spectrum littered throughout ‘Reflections’ but these influences are never rammed down the listener’s throat. Instead, Beholder are happy to doff their cap in the direction of their various inspirations whilst forging an overall sound that is very much their own. Indeed, as I listen, I am unable to think of another band that sounds quite like Beholder.

What I particularly like about ‘Reflections’ is the clever subtlety that begins to come to the fore after a few careful and considered spins. On one level, Beholder do certainly deliver for those looking for an uncomplicated bout of head banging. But, they also give you more if you’re interested. Acoustic guitar interludes, multi-layered vocals and intricate, deceptively complex guitar riffs are all present and correct at various points, adding a depth and sophistication that I for one take great delight in hearing.

Opening track ‘Frozen Steps Of Utøya’ is a huge track, packed full of most of the aforementioned Beholder strengths. The down-tuned riffing and flamboyant drumming are joined by a range of vocal styles, from the snarling quasi-gruff approach, to a more impassioned clean delivery to accompany a chorus of sorts that has a hook within it that becomes rather addictive.

‘I. Machine’ is another favourite. Chunky stop-start riffs combine with more subtle melody and a demonstrable thrash vibe in the verses to devastating effect. The acoustic-led outro is a touch of class as well.

Elsewhere, the Nevermore-meets-djent overtones come to the fore within ‘Heal The Wounds’, a track that also delivers one of the biggest and most immediate choruses as well as some gorgeous lead guitar lines. ‘Dance Macabre’ spews forth a hypnotic groove and a chorus that shows off the multi-layered vocals brilliantly, whereas ‘Breath In The Silence’ sees Beholder arguably at their most progressive, with a pronounced juxtaposition between the extreme, almost cacophonous elements and their softer, more melodious side.

To be honest, there is rarely a weak moment to be heard within ‘Reflections’ and the music is further enhanced by a production that is every bit as strong as the music. I’d like to hear the bass just a tad more within the mix but this is splitting hairs and my weak attempt to find fault with an otherwise very impressive album. As I stated at the outset, this is heavy, uncompromising, honest and intense music of a very high standard and as such, I recommend ‘Reflections’ very highly indeed.