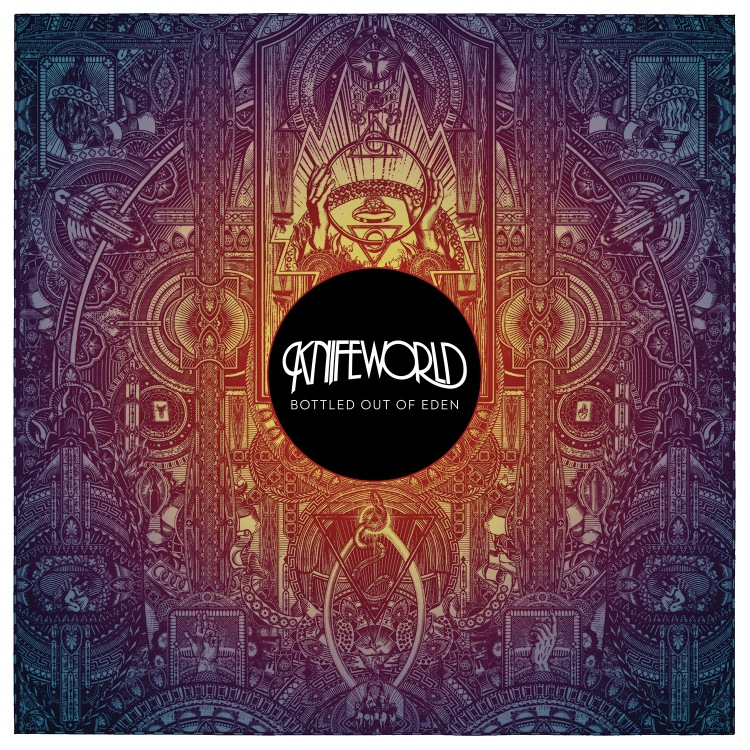 Album Title: Bottled Out Of Eden

I vividly remember being confronted with the sounds of Knifeworld for the very first time. It was whilst I wrote for Powerplay Magazine and the album was Knifeworld’s sophomore release, ‘The Unravelling’. I was asked to conduct an interview with the band and so was sent the album in advance for familiarisation and for homework purposes. I remember thinking ‘what the hell is this?’ Then I remember thinking ‘this is utterly nuts’ before finally resting on ‘ok, so this is distinctly odd, but it’s not too shabby actually’. With this in mind, I thought long and hard before deciding whether or not to review its successor, ‘Bottled Out Of Eden’. But here we are.

It is very safe to say that the music of Knifeworld is not going to be for everyone and is sure to divide opinion. In fact, it’s probably likely to scatter opinion right across the spectrum, from utter loathing, to all-out love, from mild panic, to complete confusion and everything in between. You see, Knifeworld are rather unique in the same way that peanut butter and Marmite sandwiches could be considered unique.

Knifeworld is the brainchild of Kavus Torabi but he has surrounded himself with a group of like-minded musicians to bring to life his musical vision; a musical vision that is quite unlike anything I’ve ever heard of before. Joining Torabi then is Melanie Woods (vocals, percussion), Emmett Elvin (keyboards, vocals), Charlie Cawood (bass), Ben Woolacott (drums), Chloe Herrington (bassoon, alto saxophone, vocals), Josh Perl (alto saxophone, clarinet, vocals) and Oliver Sellwood (baritone saxophone).

If you’re looking for an early indication of the kind of music that you’re likely to encounter on ‘Bottled Out Of Eden’, the best I can give you is the rather convoluted but ultimately inept description of prog rock meets jazz meets avant-garde meets ska meets psychedelia meets pop…meets…well, meets just about anything and everything to be honest. Nothing is off limits it appears.

As a result, ‘Bottled Out Of Eden’ is pretty much the most challenging album that I’ve ever had to review and kudos to the octet for that alone. It is challenging in terms of the sheer variety of music on offer but also this has been challenging to write because of my own internal conflicts. On the one hand, I find it difficult to say that I enjoy this album, because I’m not convinced that I do. I do though find it strangely compelling and, in the same way that I can’t help staring at giant spiders despite my terror towards them, I’m drawn in to ‘Bottled Out Of Eden’ via a similar morbid fascination.

However, it would be foolish of me in the extreme not to doff my cap to the band for creating something so out-of-the-ordinary and challenging. Despite all of the idiosyncrasies, all of the jarring juxtaposing musical ideas and all of the sheer randomness, there’s no denying that in its own way, ‘Bottled Out Of Eden’ is a cohesive and well put together record, with a surprising flow and an understanding of exactly what it wants to be. It wants to screw with your mind, it wants to challenge the listener and it wants to confront each of your senses, seemingly all at once. But it also wants to sound accessible and immediate in its own inimitable fashion.

‘The Unravelling’ was quite a dark and disturbing record and to a certain extent, there is a thread of darkness that runs through ‘Bottled Out Of Eden’. Mind you, with a lyrical theme that is apparently inspired by the death of loved ones, that’s hardly surprising. And yet, I also get the distinct impression that this is generally a more upbeat and lighter record than the last.

Opener ‘High / Aflame’ is actually, given time, a rather jaunty and soaring track with plenty of catchy melodies lurking underneath the quirkiness. I’ve never been a fan of brass in my music save for a few exceptions and so my ears rebel against the bassoon and saxophone embellishments whilst they embrace the strong lush layers of keyboards and the interesting rhythm section.

Then there are Torabi’s vocals; he is joined throughout by Woods, Elvin, Herrington and Perl but Torabi is clearly the lead vocalist for Knifeworld. And you’re either going to love or hate him given his distinctive delivery. Against moments of near discordant instrumentation, such as within ‘The Germ Inside’, Torabi seems to deliberately add further discomfort to the ear by appearing flat or picking notes that clash with the sounds around him. At other times, his approach is surprisingly subtle, melodious and full of emotion. ‘I Am Lost’ sees him at his melodious best for example, as does the sensitive and rather lovely acoustic guitar-led ‘Foul Temple’ or the equally beautiful and emotional ‘Secret Words’.

‘The Deathless’ is ushered in on a strong beat and later benefits from a hefty bass line but it is the vocals that draw my admiration most strongly. It sounds bizarre but the almost tribal-sounding vocals remind me of something vaguely African, perhaps even an unreleased track off the Lion King soundtrack. See, I can be a bit odd too! Coupled with a lovely recurring melody, I do genuinely like this song and return to it frequently.

The oddly-monikered ‘I Must Set Fire To Your Portrait’ is musically as bonkers as its title whilst also being one of the heaviest compositions on the album. ‘Lowered Into Necromancy’ is another schizophrenic-sounding piece of music, lurching from powerful and jarring to serene and majestic in the blink of an eye. However, the fact that the brass takes a break means that it is one of my favourites too. Then there’s ‘A Dream About A Dream’ which features a gorgeous piano melody within the surrounding melee that I am undeniably drawn to.

And so somehow, almost unbelievably, the more I listen to this record, the more I like it, almost in spite of myself. I said earlier that I’m not entirely sure that I enjoy ‘Bottled Out Of Eden’. Well, on balance, I probably think that I do and, the more I listen, the more certain about this I suspect I will become. This revelation actually comes as a bit of a surprise, to the point that I can feel my eyebrows rise as I type this very sentence.

I love complicated and technically complex music so long as it has heart, beauty and honesty. Knifeworld has all three and even though there are certain ingredients within this record that I really don’t like and wish weren’t present, it is as if I can ignore these elements and focus on those things that I do like. The brass, the ska-like inflections, the forays into deliberate cacophony and discordance the hand-clapping and occasionally Torabi’s oddball vocal delivery – I can cope with all of these because underneath them all are strong melodies, intelligent musical ideas and a clever blend of fun and deadly seriousness.

Well, there you are, I’ve even surprised myself and almost changed my mind mid review. But then, this is a review of an album from Knifeworld, so a slightly perverse conclusion is probably about as fitting as it’s possible to get.