Some of you who regularly read my blog may have noticed something of a theme going on. Now that I am writing for myself, I can listen to exactly what I want. It means that I can now explore avenues that have, to date, eluded me. As a result, I have found myself writing reviews that start with a statement along the lines of ‘this band is new to me’, ‘I know nothing about this band’s history’ or ‘why haven’t I listened to this band before?’ It’s a wonderful feeling to discover a completely new band, however early or late you are to the particular party; it keeps things fresh and exciting.

And this review continues the theme. Be’lakor is an Australian death metal band with progressive and melodic tendencies and I could curse myself for not hearing them before. After all, they’ve been in existence since the early-to-mid naughties, have released three albums and are squarely within a metal subgenre that I really like. Never mind, I have ‘discovered’ them now and anyway, I can self-administer 50 lashes later.

Right now, I have a review to write.

I am reliably informed that if you’re already a fan, then ‘Vessels’, the Melbourne quintet’s fourth album will delight you as it does not deviate far from their own tried and trusted formula. And if you’re a fan, that’s probably enough of a review to convince you to buy it. However, for the rest of us, those heathens in the midst of the enlightened, I feel compelled to elaborate and bring you into the fold along with me.

You see, ‘Vessels’ is, quite simply, fantastic. It is one of those albums that makes an instant impression but with further listens, matures and blossoms into something even more impressive. Small and subtle nuances come to the fore, intricacies reveal themselves and the melodies burrow deeper into your psyche.

At its heart, ‘Vessels’ is a death metal album or, at the very least an extreme metal record. The guitar riffs, courtesy of George Kosmas and Shaun Sykes offer plenty of aggression, as does the uncompromising rhythm section comprised of drummer Elliott Sansom and bassist John Richardson. Then there are the vocals of Kosmas, who has a wonderfully deep and rumbling tone to his growls, thereby creating another layer of brutality. In a way, I am reminded of Jukka Pelkonen from Omnium Gatherum in terms of the vocal delivery, which is a very good thing in my book. 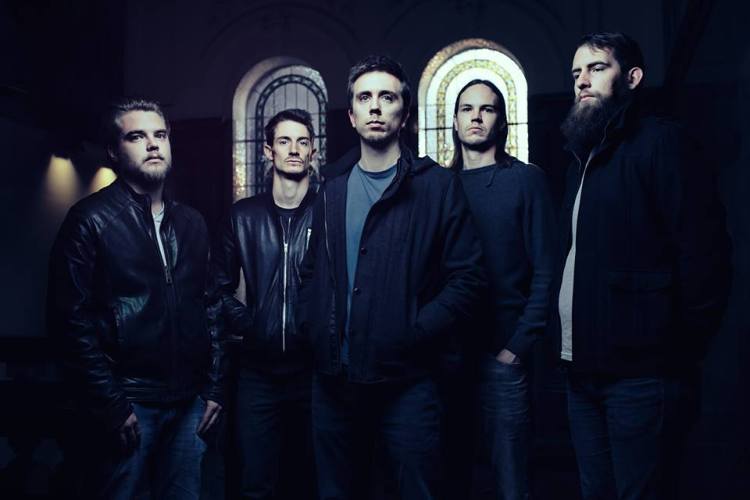 But Be’lakor are not content to just plough a brutal furrow. Theirs is an end product that is made all the more interesting and engaging thanks to a willingness to blend in other musical styles into the core sound. This is ably assisted throughout by keyboardist Steve Merry and the ability of the rest of the band to take their collective foot off the pedal and engage in sophisticated playing to compliment the brutality. ‘Vessels’ is, as a result, a multi-layered, multi-faceted beast full of wonderful aural textures, atmosphere, drama and grand elegance.

The album kicks off in a manner to underline all this because ‘Luma’ has an extreme metal-meets-hard rock flavour to it, not to mention a slightly off-kilter progressive beat. The opener might be less than two minutes long but it packs plenty in, not least an up-tempo urgency that heightens the expectations for what is to come.

That being said, I don’t think anything would have prepared me for ‘An Ember’s Arc’, which is a staggeringly excellent composition. It begins subtly with layers of atmospheric synths, finesse-laden drumming and a sumptuous acoustic guitar melody before exploding into something altogether more menacing and heavy. And yet, Be’lakor maintains that melodic edge thanks to some great lead guitar work. Plus the groove, when employed, is infectious. The song then drops away, descending into ambient post-rock territory before ascending back to heavier climes. Later, there’s room for another gorgeous acoustic segment complete with the sounds of birds singing which gives way to the most uplifting of crescendos, full of power and melody. This eight-minute track has so much going on within it, but the masterstroke is that Be’lakor manages to make it all sound cohesive and very smooth.

‘Withering Strands’ follows and if I was already smitten by ‘Vessels’, this is the track to tip me over the edge. It’s the longest composition of the album weighing in at over ten minutes but again is dominated by some compelling melodies courtesy of Shaun Sykes’ lead guitar work and the deep and rich synths. The track really underlines the progressive tendencies of these Australians as it ebbs and flows serenely from one idea to another, from blast beats to calmer moments where the darkness seeps into your bones. I love the fact that the production allows all of the instruments to shine and here, the bass really benefits, coming to the fore when all other instrumentation drops away. The introduction of a piano adds sophistication and the frequent tempo changes inject plenty of drama, meaning that this truly epic-sounding composition flies by in a flash.

To be honest, the remainder of ‘Vessels’ follows a similar pattern of extremely well-written, thoughtful and engaging melodic death metal with Be’lakor unable or unwilling to play it safe. And you know what? I love that.

‘Roots To Sever’ benefits from a driving tempo for the most part, acoustic guitars that are present throughout and some really memorable melodies that I find get lodged in my head long after the song has finished. ‘Whelm’ begins subtly before breaking into full flow complete with some of the most extreme and frantic drumming on the record. That being said, the mid-tempo stomp that appears as the song develops is a great counterpoint and the classical-sounding acoustic guitar lead is a brief but inspired moment.

‘A Thread Dissolves’ is a sub-three minute piece dominated by an altogether darker vibe, led by the keys and synths which offer a great deal within a short period of time. Some of the sounds are disturbing and agonising, perfectly fitting the overall vibe of the track.

Given that the album is the better part of an hour in length, it never fails to surprise me how quickly I reach the end. This, I find, is always the hallmark of a great album and further underlines just how enjoyable I find it.

‘Vessels’ closes with the duo of ‘Grasping Light’ and ‘The Smoke Of Many Fires’, the latter of which begins with one of the most compelling openings I have heard this year. A lone guitar starts things off, quickly but surreptitiously joined by some atmospheric synths. Before long though a really cool proggy riff and time signature ushers in the full power of the track. And ultimately, it is the overtly progressive structure and intelligent delivery that has the biggest impact upon me where this song is concerned.

So there you have it. Be’lakor and ‘Vessels’ is the biggest and most exciting melodic death metal discovery I have made in the last year or so, maybe longer. They do everything that I like in my metal and they do it extremely well. I am well and truly converted to the Be’lakor cause and I cannot sing their praises highly enough…now, please excuse me whilst I grab my belt and chastise myself post haste…