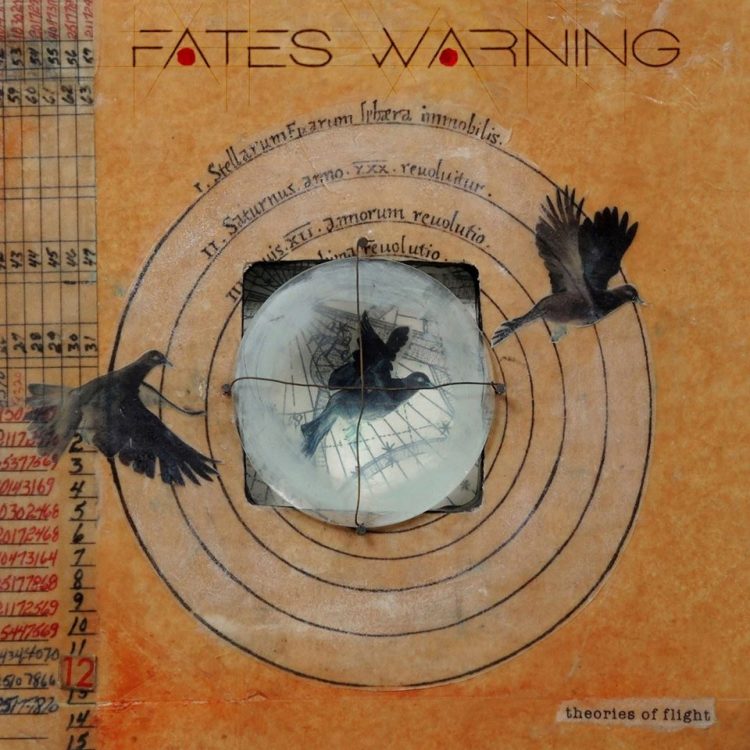 Fates Warning. These are two simple words that, over the years, have been synonymous with the subgenre of progressive metal. Indeed, the American behemoth is rightly credited with helping to create and shape the subgenre as we know it today. After all, they have been around since the 80s and, since their inception, have created some brilliant material along the way.

That said, having come late to the genre around the turn of the millennium, they’ve always fought with other bands for my full-on attention. I like a lot of Fates Warning’s early material but have found their more recent output a little hit and miss. ‘FWX’ and ‘Disconnected’ for example had their moments, but failed to completely blow me away. Thus began a prolonged hiatus that lasted a good decade before the Americans returned in 2013 with ‘Darkness In A Different Light’. Again, it had some strong moments but wasn’t as consistent as perhaps it could have been.

Now, in 2016, we are presented with studio album number twelve entitled ‘Theories Of Flight’ and boy, oh boy, have they finally and unequivocally delivered the record that I have wanted them to deliver for so long. ‘Theories Of Flight’ literally has just about everything that the ardent progressive metal fan could possibly want. And the result is rather spectacular, as you might imagine.

Starting with the basics, ‘Theories Of Flight’ features musicianship out of the very top drawer. It’s not surprising really, given the experience and talent of the entire group, and given the track record of these guys. But it is that good that it deserves a mention however obvious it may seem. Depending on my mood and my focus on any given spin, I find myself honing in on different aspects of the material, from the insane drumming of Bobby Jarzombek, to the expressive bass of Joey Vera and from the heavy complex riffs of Jim Matheos to the more melodic and effervescent lead breaks courtesy of Frank Aresti which, interestingly, have been reduced in frequency for this record. Add to this the vocals from Ray Alder who is on fire here, and the mouth begins to water.

Then there’s the production which walks that fine line between clarity and power expertly. The result is a sound that does justice to all of the material, from the all-out shredding, to the more subtle and nuanced sections, where the listener is given respite from the highly-charged metal onslaught.

But more than all this, Fates Warning sound like a band rejuvenated. The music comes across to me at least, as sounding hungry, vital and passionate, like the guys have well and truly rediscovered their mojo. Some might argue that Fates Warning never really ever lost it, but the vibe just feels different on ‘Theories Of Flight’, permeating the entire disc from beginning to end in such a positive way. It means that I smile whilst I listen, almost as much as I either headbang, air guitar or sing along in my spectacularly tone-deaf manner.

The lead ‘single’ and album opener ‘From The Rooftops’ sets the tone beautifully for the entire record. It begins innocuously enough, featuring a brooding atmosphere and Ray Alder’s fantastically measured melodic vocals. It subtly builds, a portent of things to come. And then, at just over the two-minute mark, the song properly explodes with full power. Complex, churning riffs dominate, alongside some brilliantly deft drumming, strong melodic sensibilities and the occasional blazing solo that make it a heady, memorable and exciting beginning to the record.

But if you are fearful that Fates Warning have front-loaded the album with their strongest material, you’d be wrong. ‘Seven Stars’ follows almost before a breath can be taken and led by a really nice lead guitar line, and a clever stop-start riff, it flits effortlessly between rhythmically-heavy verses and a chorus that is ridiculously hook-laden. I just love the cheekiness and groove that envelops this track despite being as technically adept as it is.

‘SOS’ is one of the shortest tracks on the album but it packs a lot in to its meagre four-and-a-half-minute life. At the mid-section, the pace is slowed and an interesting sound effect is used to create an entirely different vibe to the rest of the song which features yet another great vocal hook and more commanding riffing from founding member, guitarist and principle song-writer Jim Matheos.

By contrast, ‘The Light And Shade Of Things’ is one of two compositions that top the 10-minute mark. It begins quietly, taking its time to deliberately build the tension and increase the atmospherics. The lead guitar embellishments are sparingly used but have a vaguely bluesy feel to them when they appear. And then the gentle opening is forgotten as, like a tsunami, heavy riffs, blistering drumming and almost confrontational vocals threaten to knock you off your feet. It might not be as fast-paced as other songs, but what it lacks in speed, it makes up for in intensity and a more pronounced exploration of light and shade. A gorgeous lead guitar solo follows on from a short acoustic-led interlude and the whole thing is rounded out by an addictive, sprawling chorus that shows Alder at his absolute best, deploying his excellent range to dispel any concerns that the high notes can no longer be reached.

Elsewhere, I adore the urgent, up-tempo ‘White Flag’ which features another great chorus and some of the best work from bassist Joey Vera and his rhythm partner-in-crime Jarzombek. It also underlines the song writing prowess as it effortlessly and seamlessly moves from one idea to another in true progressive style. ‘Like Stars Our Eyes Have Seen’ is a thrashy monster that proves that you can be heavy and aggressive as well as subtle and technically adept. And ‘The Ghosts Of Home’ deservedly earns the ‘epic’ tag as it runs the gamut from dark and strangely oppressive cinematic overtones, to emotion-fuelled atmospheres and from jaw-dropping virtuosity to feel-good melodic intent. To close things out, the title track is a much moodier and introspective piece of music complete with spoken word samples, plenty of synth-led atmospheres and a genuinely bleak and sombre tone overall.

We’re only around half-way through the year but 2016 has been utterly sensational for fans of progressive music. Fates Warning have come to the party and their cup doth overfloweth. In this kind of form, Fates Warning are thoroughly irresistible and with ‘Theories Of Flight’ they remind us all, if a reminder was necessary, that they are rightfully considered to be one of the most important and best progressive metal bands on the planet.