When I first heard the self-titled debut album from Amaranthe in 2011, I was quite rude about it. I considered it to be heavy metal fluff, the kind of music that goes in one ear, gives a momentary shot of aural saccharine, and then quickly departs out of the other ear. I didn’t consider the modern-sounding, highly polished and instantly hummable music to be anything other than a half-baked, cynical exercise in gaining immediate popularity. The addition of a very attractive female vocalist did very little to initially dissuade me of this opinion.

However, I can admit when I’m wrong. And in the case of Amaranthe, I was wrong. First impressions do count for a lot where music is concerned but as a fan of certain genres where effort and repeated listens are required to form a proper opinion, I ploughed through my initial misgivings to give Amaranthe a fair crack of the whip.

The result is that, a further two albums on from that early opinion, I now really respect Amaranthe. Moreover, I really like Amaranthe and their musical output.

With not one, not two, but three vocalists, it could be easy to dismiss this as a gimmick or a thinly-veiled attempt to cover all bases given that there’s a growler (Henrik Englund Wilhemsson), a clean male singer (Jake E Lundberg) and the aforementioned female singer (Elize Ryd). Equally, with modern sound effects, heavy riffs, breakdowns, and an undeniable pop edge in terms of the song structures and huge hook-laden choruses, you could be forgiven for thinking that Amaranthe are trying to be a band to cater for all tastes. With few tracks extending far beyond three minutes in length and with slick music videos here, there and everywhere, it all helps to underline the fact that Amaranthe are deliberately geared up to be radio and TV friendly. 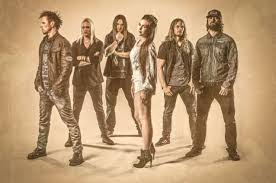 Crucially however, Amaranthe pull everything together and create a racket that is simply too good to be hated or ignored. Listen carefully and it becomes clear that the musicians are better than you might think. For example, Olof Mörck, is a very accomplished songwriter and is more than just neatly adept as a guitarist; the riffs can be simple but they can also be deceptively intricate. Likewise, drummer Morten Løwe Sørensen is a hugely talented musician, laying down strong, interesting beats that are as subtly clever as they are powerful.

But above all, when all is said and done, who doesn’t like a good dose of feel-good, memorable music that perhaps doesn’t require a huge amount of effort to enjoy? Sometimes, we’ve all got to rock out, yes? Sometimes, we all need to hear something that you can sing in the shower, yes? Well, in that case, there’s no one better than Amaranthe.

With that all sorted out, what of album number four, ‘Maximalism’?

I will admit that, on first listen, I wasn’t blown away. My initial feeling was that Amaranthe had maybe strayed too far into all-out pop territory and, even more worryingly, that maybe the quick-fire anthems weren’t as plentiful as before. As the album developed, I didn’t find myself succumbing to many of the songs and before I knew it, the album was over. Hmmm…

Mind you, I remember feeling exactly the same way about ‘Massive Addictive’ (2014) and ‘The Nexus’ before that in 2013. So, without worrying, I ploughed on for spin number two and soon after, spin three. Several days and plenty of stereo time later, what follows is a critique based on substantial listening and not after a dismissive single airing and certainly not an opinion formed after hearing one song.

‘Maximalism’ opens strongly with ‘Maximize’, so-named I think because it is a track that contains everything for which Amaranthe are known, pushed up to the limit. It opens with an electronic melody and beat, more akin to the club scene before diving headlong into a big, chunky riff. It all falls away to allow Ryd’s excellent vocals to take centre stage atop the rhythm section of Sørensen and bassist Johan Andreassen. She is then joined by the gruff delivery of Wilhemsson before they launch into a chorus of mammoth proportions. I absolutely love the swift but melodious lead guitar solo from Mörck and the blend of metal, pop and electronics works really well.

‘Boomerang’ features another insanely catchy chorus that has more than an echo of the classic 80s Dead Or Alive song, ‘You Spin Me Round (Like A Record)’. It’s a song that I have a secret liking for, so I can’t help but be won over by this track. The gruff vocals are a little more prominent and again, the riffs are strong.

And then we’re faced with ‘That Song’, the composition that, since it was released to the world a few days ago, has polarised opinion. Well, actually, as far as I can tell, it has received more negativity than anything. There’s no denying the fact that this is the most pop-centric that Amaranthe have ever sounded and there are parts that might not be out of place coming from ‘insert any current pop star here’ and could be heard on mainstream radio. But, in addition, whilst it isn’t my personal favourite, it does also have a rock ‘n’ roll vibe, and the beat does remind me a little of Queen’s ‘We Will Rock You’. So it can’t be all bad surely?

Moving on and ‘21’ has a nice swagger about it in the opening riff and the ensuing stripped back verses before hitting with one of the most infectious choruses on the album. Again the guitar embellishments sparkle and I just wish there was more of that on offer throughout. ‘On The Rocks’ benefits from great guitar work and slick drumming but is dominated by another structure and delivery that veers ever closer to the pop world topped off by a chorus that’s equal parts annoying and ludicrously catchy, reminding me of Pink in the vocal delivery.

But then to underline the excesses at play on this record, ‘Fury’ is arguably one of the heaviest and uncompromising tracks Amaranthe have penned. It gallops along at speed underpinned by a superb rhythm section and features some of the harshest vocals from this band. The chorus might be melodic, but nothing else about this bruising track is easy on the ear, which I rather like to be honest.

Two of my favourite tracks on the album then sit together in the middle of the record. ‘Faster’ has yet another winning chorus but I like the increased prominence of Jake E Lundberg with his clean vocals as well as the much more overt metal credentials on display. The musicianship all round is out of the top drawer and it just has a great feel to it. ‘Break Down And Cry’ on the other hand is a grower that I now love thanks to its modern melodeath stylings and sprawling chorus.

‘Fireball’ is a cracking track with yet another full-on sing-along chorus and indulgent guitar solo whilst ‘Supersonic’ feels rather bombastic and eclectic even by Amaranthe’s standards.

‘Maximalism’ isn’t all about breathless up-tempo pop metal however, as both ‘Limitless’ and closer ‘Endlessly’ both demonstrate. The former offers another chance for Lundberg to come to the fore as he duets with Elize wonderfully on what is a ballad of sorts made all the stronger by powerful melodies and understated yet forceful guitars that sit nicely beneath the singers. ‘Endlessly’ dials things down even further. It is a surprisingly emotional composition and, thanks to the lush orchestration, is a grandly cinematic ballad and a slightly unexpected statement on which to end the record.

Once again, the sextet has delivered an excellent album that will almost certainly hit all the right notes in the live arena. ‘Maximalism’ demonstrates yet again that Amaranthe are consummate professionals at writing and performing music that is succinct, powerful and infectious as hell. Amaranthe are no longer a guilty pleasure; they’re simply a pleasure.