I love my blog. It gives me so much freedom to review what I want and, in the process, I can ‘discover’ a whole load of new music in the process. It also makes me realise, joyously, that as wide as my rock/metal knowledge is, I haven’t even begun to scratch the surface. I could study this music for a lifetime and still not get to grips with everything that it has to offer. Rather than frustrate me or scare me, this is a wonderful epiphany.

This review represents another new find for me, adding a new piece to the rich and ever-expanding musical tapestry to which I have devoted a large chunk of my life.

Crippled Black Phoenix don’t have the most aesthetically pleasing of names I’ll grant you, but get over this hurdle and you will discover some music with real merit. The band hails from here in the UK, was born in 2004 and is the brainchild of Justin Greaves, who is himself a multi-instrumentalist. Today, the collective has swelled to a princely eight members, with various interesting backgrounds and influences. Within the ranks are musicians who played with notable acts such as Iron Monkey, Mogwai and Electric Wizard. It is therefore no real surprise to learn that the output of Crippled Black Phoenix is every bit as intriguing and eclectic as their chosen moniker.

Intriguing yes, eclectic certainly, but in addition, add in the words enigmatic, multi-faceted and ambitious. Crippled Black Phoenix is most definitely a difficult band to pigeonhole and that’s a strength as far as I’m concerned. Central to the output on ‘Bronze’, the band’s latest offering, is without question a form of post rock but it is blended with a demonstrable 70s vibe, from the classic hard rock and Sabbath-esque metal of the time, to those more sludgy doomy climes. And then there’s the melodic side of the band which definitely has a wonderfully laid back, dreamy Pink Floyd feel at various points. To muddy the waters further is the ability of the band to change tack markedly between and even within songs, leading to the realisation that no two tracks are truly alike.

‘Dead Imperial Bastard’ is an intense opening salvo, full of properly oppressive and dark atmosphere, as well as a latent sinister feel which builds up the drama, only finally to give way of what I can only surmise is some kind of female tribal chanting. The chanting acts as the bridge between the opening song and its successor ‘Deviant Burials’. In fact, these strange soundbites, samples and spoken-word sections crop up frequently throughout ‘Bronze’ to add to the overall sense of drama and the somewhat abstract nature of the record. 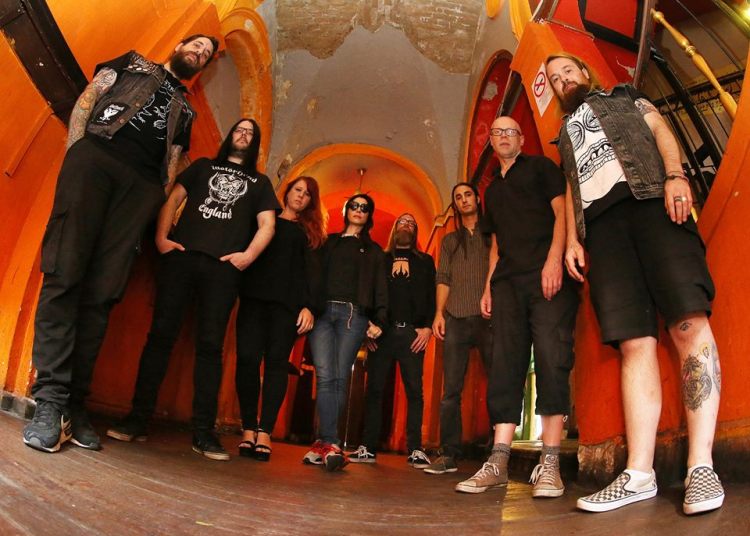 Returning to ‘Deviant Burials’ and the tone of the song initially follows its predecessor in that it is dark and foreboding, but also melodic. Before too long though, in comes a mid-tempo doom-esque stomp of a riff at the back of the mix. As it slowly comes to the fore, the track explodes with power. Clean, droning vocals lollop on top of the hubbub, adding a lazy, hypnotic quality. And then the riff drops away to be replaced by a gorgeous segment that contains a wonderful melodic intent and a whimsical nature before it builds back up via a thunderous and memorable riff.

Despite being demonstrably present up to this point, the post rock influences really come to the fore on ‘No Fun’. It is a track that is dominated by a relentless rhythm, walls of distorted sound and softly-delivered vocals which help to create a sense of accessibility and grace amongst the otherwise punishing track.

By contrast, ‘Rotten Memories’ skips along to a more laid back blues-derived rhythm, enhanced by a melodic chorus, complete with piano and some of my favourite vocals on the entire album. It seamlessly segues into ‘Champions of Disturbance (Part 1 and 2)’, another urgent and intense instrumental workout, full of nice subtle touches within the general melee before changing tack starkly a little over the half-way point. The tempo increases, the guitars reach fever pitch, as does the rhythm section before the developing wall of post rock sound eventually gives way to a hugely loose and groovy riff-fest topped off by vocals that oddly remind me of ELO thanks to the chosen effects.

‘Goodbye Then’ is a quieter, more soothing proposition. Introspective and sombre, it is no less intense and in no way a lightening of the mood. The overriding theme of ‘Bronze’ is dark and moody, a theme that continues even when the pace is slowed. If anything, ‘Goodbye Then’ is greater of atmosphere and more claustrophobic than much of the material here.

The cover of Joe Walsh’s ‘Turn To Stone’ is an unexpected pleasure and is given a true Crippled workover to great effect, complete with guest vocals courtesy of Arvid Jonsson (Greenleaf).

I’m not sure what it is with brass instruments in rock and metal these days; there seems to be a proliferation of this ingredient of late and I retain a steadfast dislike of it I’m afraid. Therefore, when the brass makes an introduction within ‘Scared And Alone’, I can’t help but inwardly sigh. That said, despite my prejudices in this direction, the brass does play an important role within this melancholy and slow burning track, one that does strangely work alongside the minimalist soundscape and the fragile, reticent voice of Belinda Kordic. As the track inexorably builds, it blossoms into something rather special, a personal favourite I might suggest.

‘Winning A Losing Battle’ deconstructs at the mid-point to be replaced by some disturbing sounds and effects, not least the unsettling bellowing sound that shakes the very foundations of the Earth, or so it feels. What follows is equally odd, meaning that it is the quirkiest composition on the album, underlining that ‘ambitious’ tag that I slapped on the band earlier.

‘Bronze’ then closes with ‘We Are The Darkeners’, arguably the most immediate and anthemic song on the entire album. It feels as though the octet realise they are in the home straight and let go completely. The riffs are huge, the energy is palpable and the track just rocks out, underpinned by more quality melodies.

Having never experienced Crippled Black Phoenix before, I’m not in a position to compare ‘Bronze’ to the rest of the band’s back catalogue. What I can say though, is that ‘Bronze’ has impressed me to the point that I find myself wishing that all post rock albums sounded this good, this intriguing and this varied. Well done Crippled Black Phoenix, you have a new fan!