Welcome to day two of my ‘Album of the Year 2016’ top 30 countdown. If you missed the first post in this series, check it out here:

As I stated at the beginning of the last post, 2016 has been an incredibly strong year for my personal music taste. I have listened to countless new releases and have reviewed, in full, nearly 100 of the best. Whittling them down into a top 30 has been excruciatingly hard and even now, I’m still tinkering with the order and making 11th hour swaps.

In some cases, my opinion of the music has increased whilst in others, my initial love has waned disappointingly. As such, my final 30 contains a few surprises even to me. Mind you, going back and revisiting all these super albums has been a delight and is something I’ve enjoyed immensely. However, rest assured that every album that’s featured in this list is worthy of its place, whether it was released 11 months or 11 days ago.

So, back to the main issue at hand – what is today’s album of choice?… 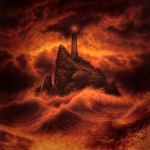 “‘Afterglow’, the fourth album from In Mourning, is such a positive album because Messrs Tobias Netzell (guitars, vocals), Pierre Stam (bass), Björn Pettersson (guitars, vocals), Tim Nedergård (guitars) and former katatonia drummer Daniel Liljekvist have really come up trumps in terms of merging three or four key ingredients into a cohesive and believable end product. They take the crushing brutality of death and doom metal and blend it with mournful, elegant melodies, a progressive bent and a liberal dose of dark, foreboding atmosphere.

I am hugely impressed by what I have heard. There’s not a weak track anywhere to be found and the consistency of the song writing and indeed the execution is out of the top drawer…‘Afterglow’ is a damn fine record and is one of the finest melodic death/doom releases I’ve heard in a while, right up there with label mates October Tide and last year’s opus from Swallow The Sun.”

This record was released back in May 2016 and, if anything, the more I listen to this album, the more I like it. ‘Afterglow’ made a big impact right away but it is one of those releases that actually gets stronger with time and repeated listens. It is particularly satisfying when it is returned to after a bit of a break because I find that the heavy and uncompromising riffs hit harder whilst the melodies and the dark atmospheres feel even more emotive and elegant.

Some six months on, ‘Afterglow’ really feels like a remarkably consistent record with plenty to enjoy throughout, most notably the progressive elements that keep the listener on their toes. However I have to admit that ‘Ashen Crown’ is the standout moment; I just love the juxtaposition between the heavy opening and the shoegaze-infused second half that sends shivers down my spine thanks to its subtlety and acoustic-led elegance that conveys real depth, emotion and poignancy, not to mention its uplifting overtones. That said, there are plenty of other fantastically mesmerising moments to be found littering this impressive album.

If you’re looking for an album that is brutal, sophisticated and dripping with dark atmosphere, make sure that you check out ‘Afterglow’ as it is easily the best and most accomplished release from this talented Swedish extreme metal band.