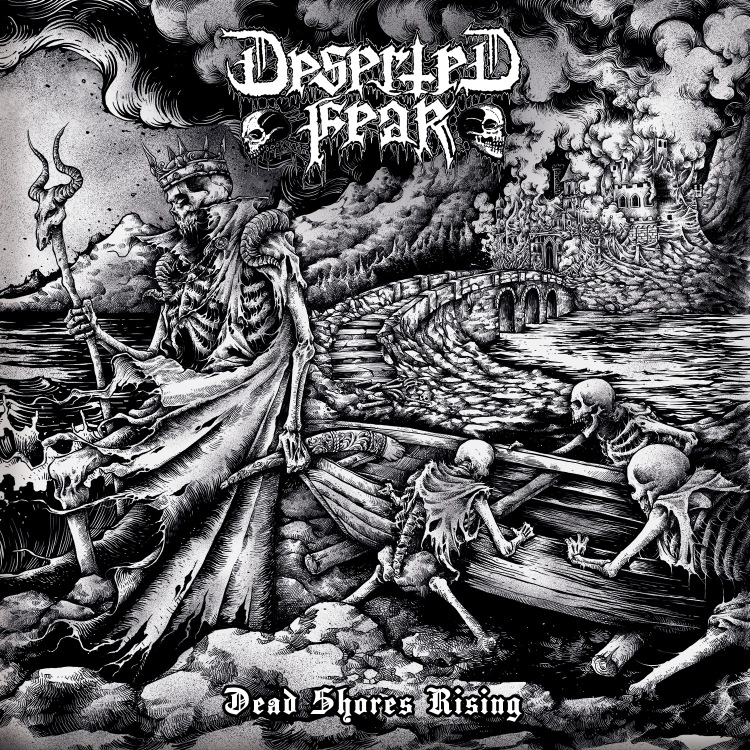 My ambition to try to listen to more bands than ever in 2017 is off to a flyer with yet another new discovery that ticks plenty of boxes. The band in question is Deserted Fear, a German old school death metal trio comprised of guitarist/vocalist Manuel Glatter, guitarist Fabian Hildebrandt and drummer Simon Mengs. I say old school because the music on this, their third album ‘Dead Shores Rising’ is full of that groove and understated melody that typified much of the output from around 20 years ago.

What makes ‘Dead Shores Rising’ more interesting for me but will divide opinion amongst death metal aficionados the world over, is the choice of production. Sure there are still some raw edges to be heard and enjoyed, such as the harsh, guttural and raspy vocals from Glatter or the overall tone of the rumbling guitars that sound like the aural equivalent of wading through treacle. However, thanks to some mixing and mastering magic by Dan Swanö, there is an undeniably modern sheen to the music.

From the thoroughly brilliant and rousing opening intro that sounds like it could have been culled from a Jerry Bruckheimer blockbuster, you’re under no illusion that time and effort has been taken on the production, a theme that continues at the midway mark with the minute-long pause for breath ‘Interlude’. And then, throughout the remaining nine album tracks and two bonus cuts, one of which contains a guest vocal appearance from At The Gates’ Tomas Lindberg (‘The Path Of Sorrow’) you can hear the general polish that has been applied to soften a few of the rougher edges. The aforementioned guitars are just a little too monstrous and rich, the drums are just a little too crisp and the mix is just a little too clear and balanced for this to be a bona fide old school death metal album from back in the day.

I’ll probably take a lot of flack for this but I actually have no problem with this kind of groovy mid-tempo death metal having a clearer, stronger production. As with black metal, there are some within death metal circles who will like the rawer production as it conveys, in their eyes, more authenticity. I do agree but at the same time, if the music is good, I want to be able to hear it. I certainly don’t subscribe to the ‘recorded in a shoebox with a machine powered by the tears of squirrels’ approach to production, that’s for sure. As a result, ‘Dead Shores Rising’ sounds very nice to my ears indeed. But more importantly, the vibe and intensity remains intact.

Musically-speaking, I am equally satisfied with the end result. I remember the days when I heard Entombed for the first time or Obituary, Dismember or even At The Gates. To a greater or lesser extent, these are all good reference points for the output of Deserted Fear and I get the same kind of overall feelings listening to ‘Dead Shores Rising’ as I did when I first listened to the aforementioned. The power, the brutality, the malevolence, the clandestine melodies, and the more overt hooks – it is all there and it is thoroughly absorbing. This is the kind of no-frills, headbanging, groove-laden death metal with a hint or two of melodeath that I really enjoy listening to. This stuff makes me smile, I just can’t help it. Or to save face, perhaps it just makes me grin wickedly.

From the opening moments of ‘The Fall of Leaden Skies’ to the final notes of ‘The Path Of Sorrow’, the riffs, courtesy of Hildebrandt and Glatter are the king of Deserted Fear’s world. They bludgeon, they groove, they scythe and they relentlessly pummel for nigh on 45 minutes, but they do it with no small amount of style and panache. Admittedly there is a paucity of variation on ‘Dead Shores Rising’ but why would you want the music to be markedly different from song to song when the quality of what they offer is so high in the first place? There are times where you want to be entertained without having to think too hard. And, without denigrating the musicians involved or their collective talents and efforts, this is the perfect extreme metal record for just that purpose.

And whilst the guitar riffs dominate, they are more than ably assisted by the other instruments, including the drumming from Simon Mengs, which lays down a meaty foundation upon which the relentless six string action can take place. In addition to the riffs, I like the fact that there are lead guitar lines that introduce some measure of melody and that there are just enough lead solos to keep things interesting, helping to quench my personal thirst for such things, without derailing the impact of the tracks too much.

But it is the compositions themselves that transform what is an already strong blueprint into something rather brilliant. Nothing is extraneous, nothing is unnecessary. Each composition is a tight, well drilled and excellently executed slice of extreme heavy metal. Aside from one track, ‘Carry On’, no track extends much beyond four minutes, meaning that the material is a well-honed beast that wastes no time in making its mark on the listener.

In many ways, given the strength of the entire album, it would be unfair to pick out specific highlights. But I can’t let this review pass without mentioning a couple of my personal favourites.

‘The Fall Of Leaden Skies’ is a killer composition, setting the album on its way masterfully. After a flamboyant drum intro, the blend of fast-paced and groovy riffs atop an almost perpetual blastbeat makes an instant impression, culminating in a chorus that is almost catchy.

‘Open Their Gates’ on the other hand contains hints of early Obituary primarily in the monumentally heavy and groovy mid-tempo sections and via Glatter’s more contorted and convulsive vocal delivery.

And then there’s my personal favourite, the masterful ‘Face Our Destiny’, which cuts loose a little more. It therefore features more in the way of lead guitar histrionics, stronger more pronounced melodies within the chorus and an epic-sounding 45-second outro complete with wailing lead guitar.

I have absolutely fallen for the immense charms of Deserted Fear and this, their third full-length studio album. ‘Dead Shores Rising’ is a totally compelling album that has completely renewed and reinvigorated my love for death metal. It is bold, it is savage and it kicks some serious butt. What more could you possibly want?