Science-based power metal. These four words will go a long way to determine whether or not you carry on reading the remainder of this review. It is a description that it likely to either draw you in like a tractor beam or send you scurrying away faster than you can say ‘Higgs Bosun’. See what I did there?!

Personally, I have a big soft spot for power metal in general so long as it is done properly. That was definitely the impression I got when I heard ‘Life Finds A Way’ on the Internet and so therefore, coupled with the striking cover artwork that borders on the silly, I found myself intrigued enough to give this self-titled debut album from Helion Prime a proper listen.

By way of background for the uninitiated like me, Helion Prime are a Sacramento, California-based quintet comprised of guitarist and founder Jason Ashcraft, lead guitarist Chad Anderson, bassist Jeremy Steinhouse, drummer Alexander Bosson and brand new vocalist Kayla Dixon. The band are now signed to AFM Records and as part of that contract, they are re-releasing this self-titled debut that originally saw the light of day in 2016. The fact that many of us were blissfully unaware of this album clearly meant that the initial release did not come with a great deal of pomp or fanfare, something that this re-release will no doubt hope to address.

Personally, I’m really glad this decision was taken. Normally, I’m a little cynical about such things, questioning value for money and such like. However, here I think it is justified because this is a band that have plenty of potential and they deserve to be brought to the attention of the wider world before a second album is released in the next year or so.

Forget the science aspect for just a moment and concentrate on the music. On this score, the output is bound to find favour with plenty of fans of power metal but more than that, it is likely to appeal to those who delve into the worlds of melodic metal and classic heavy metal, even those who prefer the thrash genre, although this is slightly less pronounced perhaps.

What you get is ten songs full of sharp, chunky riffs, lots of groove and strong choruses with enough hooks and melodies to keep you entertained without diluting the metallic intent of the compositions. And then on top of that, you have the voice of Heather Michelle, who has since departed. Despite a proliferation of female singers in metal in recent years, the genre of power metal is still largely a male dominated world, so this is a welcome ingredient to the Helion Prime recipe.

More than just a unique selling point or novelty aspect, Heather has a truly wonderful voice, one that I personally really like. It is more than powerful and plenty rich enough to compliment the beefy music that sits behind it but she also sounds strangely seductive and very feminine. It is difficult to explain but I can’t get enough of her voice; there’s just something about it. I hope her recent replacement Kayla Dixon is as good. 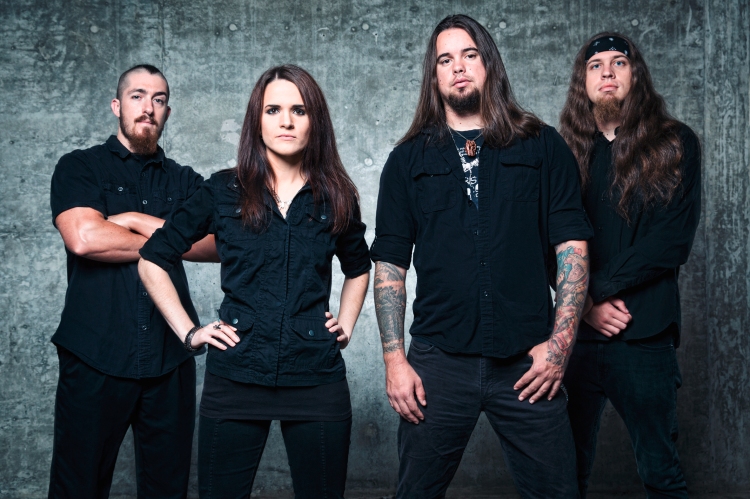 In keeping with the scientific-based lyrical content that spans space exploration, prehistoric times and a nod to science-fiction, the album opens up with a futuristic-sounding intro where synths lay the foundation for a sampled spoken-word diatribe that hypothesises that we are not the only intelligent life in the universe.

After this dramatic opening, things get going properly with a duo of monstrous tracks. ‘The Drake Equation’ bounces along in up-tempo fashion, leading to an instantly catchy chorus that lays down a marker for what Helion Prime are all about. The rhythm section is impressively robust and dominant and the lead guitar work that enters the fray in the latter stages is extravagant, but not overly so. In fact, thinking about it, this is a feature of Helion Prime; they could have gone all-out bonkers and over-the-top but instead, they have chosen to craft a set of songs that are nicely honed and which don’t take things too far.

The chorus to ‘Life Finds A Way’ has to be my favourite on the entire record. It is catchy as hell, epic-sounding with a galloping rhythm. Instantly likeable, it is compounded by a cool lead guitar solo and more strong riffs that are addictive and bring a smile to my face.

‘Into The Black Hole’, raises the pace even further and has a vaguely prog feel as it features a slightly quirky vocal line within the verses, only to be replaced by another great sing-along chorus and no-nonsense riffs that wouldn’t sound out of place on a traditional heavy metal record.

Elsewhere on this debut record, ‘A Place I Thought I Knew’ dials the intensity down a notch to good effect whilst ‘You Keep What You Kill’ delivers more of a speedy thrash vibe, incorporating some deep growled vocals and some prominent keyboard embellishments.

‘Oceans Of Time’ is arguably the first time on the record where the band delve a little into indulgent territory as keyboards and guitars trade blows during an extended solo section whereas ‘Apollo (The Eagle Has Landed)’ has the feel of the band letting go just a little more. It has another big chorus but flits between all-out speedy power metal and thrash and even flirts ever so subtly with progressive elements.

To round things out, Dream Evil’s Niklas Isfeldt appears on closer ‘Live And Die On This Day’ to deliver some male lead vocals. It’s a nice touch and ends the album with an interesting and welcome twist.

All in all, I have a strong feeling that Helion Prime might prove themselves to be a class act. This debut is slick, well put together, nicely proportioned and a lot of fun, without ever descending into silliness as their self-created tag line might suggest. ‘Helion Prime’ is a cracking debut and sets an impressively high benchmark for future releases by this talented bunch of Californians, beginning with their sophomore effort, along with their new vocalist, which is due to see the light of day in late 2017/early 2018.