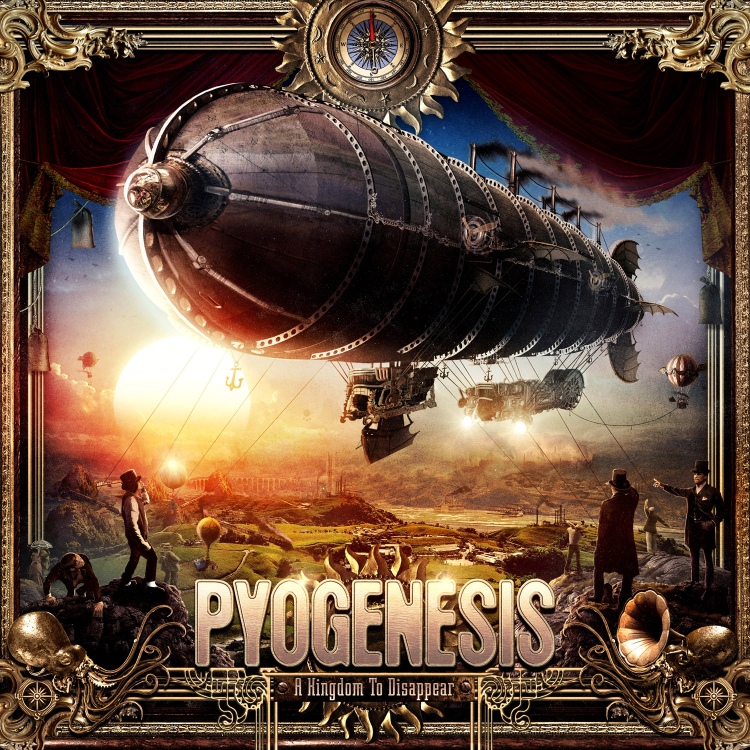 Album Title: A Kingdom To Disappear

German metal band Pyogenesis have been around since the beginning of the 90s and, despite a prolonged hiatus between 2002 and 2015, have released seven albums in that time. The return of the Stuttgart-based quartet in 2015 with ‘A Century In The Curse Of Time’ was nectar to the ears of long-term fans and now, two years later, Flo V. Schwarz (guitars, vocals), Gizz Butt (guitars, backing vocals), Malte Brauer (bass, backing vocals) and Jan Räthje (drums) return to deliver album number eight, ‘A Kingdom To Disappear’.

And yet, despite this lengthy history, I had never checked out Pyogenesis prior to reviewing this record. Pyogenesis were a black hole in my knowledge and as far as I could remember, I’d not even listened to a single song. I had no idea what to expect and wasn’t even considering a review.

So what changed? I was scrolling through my social media timelines and I heard a few positive comments about this record. Most notably, a fellow blogger who I admire was very effusive with praise over this record and so I felt I had to investigate further. I tracked down a couple of songs on the ‘net and whilst it wasn’t instant love at first listen, there was something going on that intrigued me. To be honest, I think much of what attracted me was the epic and quirky nature of the videos that accompanied the music; it seemed to me that the band were 100% into the music and were living it. Videos can be deceptive, but on this occasion, I believed the vision that the band were creating and went along for the ride.

It has turned out to be a ride that I have really enjoyed too and it leaves me thoroughly entertained but also a little confounded as to why they never attracted my attention earlier. If ‘A Kingdom To Disappear’ is an accurate example of the music that Pyogenesis have been creating all these years, I can’t understand why they never previously hit my radar.

On paper, the blend of extreme metal, hard rock, Gothic overtones and huge, epic melodies sounds like it should be right up my street. And so it has proved because this is a cracking album, an increasingly addictive listen that is over insanely quickly. ‘A Kingdom To Disappear’ spans nine tracks and a total of around 46 minutes but such is the level of entertainment, it feels like it is much shorter than that. This is clearly a good thing.

Setting the album up, is the short opener ‘Sleep Is Good’ which introduces a key ingredient to the Pyogenesis sound, namely multiple vocalists. Atop a rousing, stomping melody sits a multi-layered vocal hook that is instantly glorious.

Out of this brief opening salvo comes ‘Every Man For Himself And God Against All’ and it delivers an immediate aural kicking. It begins in all-out brutal death metal territory complete with deep, guttural vocals before opening up into one of the most glorious, anthemic and sing-along choruses on the record. It was quirky to begin with when I watched the video, but I have grown to love it. The rhythm section delivers a powerful platform , the guitars create swathes of huge sound and the clean vocals of Schwarz ooze passion and emotion.

‘I Have Seen My Soul’ by contrast begins with a keyboard and atmosphere-drenched slow pounding riff that’s pure modern Evergrey territory, an element that remains throughout the song despite the more hard rock-inspired chorus that cuts through the cloying misery that permeates this huge song brilliantly. And in spite of the subject matter, you’ll be singing this track for weeks, guaranteed. It’s an obscure reference point, but if you’ve ever heard the likes of Mechanical Poet, you’ll recognise the chosen guitar tones from Pyogenesis, something that takes a little getting used to but works very nicely to compliment the band’s full-on approach.

Frankly though, the killer hooks and melodies are all over this album like a rash. ‘It’s Too Late (A Kingdom To Disappear)’ features more layered vocals from almost every corner of the band to create something very memorable,

‘New Helvetia’ gives listeners something a little different in that it is an acoustic guitar-led ballad of sorts. It is the perfect vehicle to demonstrate the band’s more delicate side as well as the not-inconsiderable talents of guitarists Schwarz and Gizz Butt. And speaking of different, there’s also ‘That’s When Everyone Gets Hurt’, which is a much more atmospheric number that brings those more Gothic elements to the fore whilst blending them with a hint of the 80s, electronic darkwave and even a smattering of post-metal. And yet, such is the strength of the melodies, I really enjoy listening to it.

And then, before you can seemingly blink, we’re treated to the most epic of all the songs on this great record, ‘Everlasting Pain’. And what a finale this is. It lasts for over thirteen minutes but it deserves this length. At its core, this is quite a straightforward composition, dominated by yet another monster of a melody that gets right under my skin. And yet despite this, it rather contradictorily contains plenty of light and shade and has a very slightly progressive feel to it, as it twists and turns through peaks and troughs of emotion. You can feel this vein of emotion all through the song, whether it is within the heavier sections and faux gruff vocals or via the quieter acoustic guitars and soft, fragile voice of Schwarz. And the closing three or so minutes are utterly brilliant, as the intensity builds to finally overflow in a flamboyant release, led by wailing guitars, pleading vocals and one last reprise of the central melody and chorus.

A mere 26 years after forming, I have finally checked Pyogenesis out and I am one very impressed reviewer. I can’t say for sure whether long-term fans will like it because I simply have no frame of reference. Personally-speaking, I have fallen for the charms of the German outfit and I can guarantee that on the strength of ‘A Kingdom To Disappear’, my next review of Pyogenesis will come with a more extensive knowledge of their entire back catalogue.