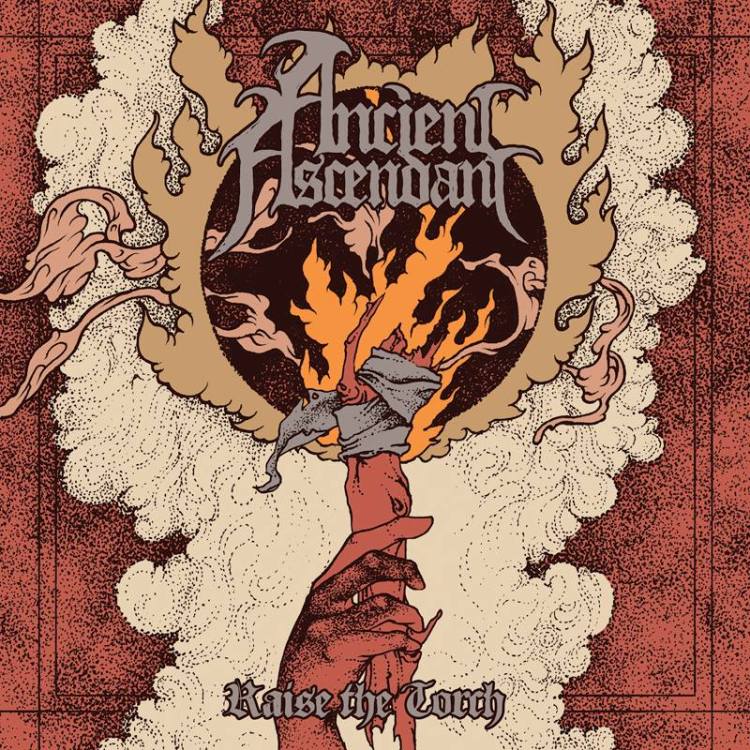 When the legendary Dan Swanö is quoted as saying that Ancient Ascendant are ‘one of the best brutal bands to come out of Britain, well, ever’, I don’t really have any choice but to investigate further. Who am I to ignore a ringing endorsement like this from such an important name within extreme metal circles?

To be perfectly honest, I’m not sure that I’ve have given this album a go if it hadn’t been for Swanö’s interjection, so I have yet another reason to be indebted musically to the legendary Swede.

‘Raise The Torch’ is the third album from the UK extreme metallers and the first to cross my path. And the first thing that strikes me is just how different this sounds. It is no exaggeration to describe the output of Ancient Ascendant as a blend of death metal, black metal, classic metal, hard rock, thrash metal and prog. There’s even a faint echo of a few other things in the melting pot too. The way I’m describing this, you must be thinking ‘oh, that sounds like it could be messy’.

And you’re right, the result could sound messy, disjointed and lacking cohesion. And yet it doesn’t. This is a rip-roaring album that works pretty much from start to finish, where the enjoyment levels are cranked up to the max, accentuated by a strong production courtesy of Ritual Sound and Swanö himself (Unisound).  I’ve become pretty hooked on this record if I’m honest.

The black and death metal genres, by their very nature are usually associated with the darker side of life but whilst these elements play a big part in the Ancient Ascendant sound, the music here frequently comes across as being quite upbeat and infectious. Yes, there are sections that are extreme and intense and in no way can ‘Raise The Torch’ be considered ‘happy’. However, the venom is tempered all the while by huge grooves, large slabs of melody, interesting song structures or simply an almost intangible vibrancy that permeates the album.

The juxtaposition of various, competing ideas in turn then creates something of a progressive vibe. Whether this was by accident or design, it matters not because to my mind, the end result is all that matters. Each of the nine compositions has a strong identity at its core but within that, Ancient Ascendant afford themselves the space to experiment. And this experimentation, although not overdone, makes the listening experience exciting and rather exhilarating. I’m struggling to think of another band currently on the scene who has anything significant in common with Ancient Ascendant, something that can only be positive.

On to the music itself in more detail and ‘Raising The Torch’ kicks things off with an atmospheric instrumental that is elegant and refined. It has a sinister edge that’s pure black metal intro fodder but it is also quite beautiful and cinematic in scope.

After one minute and 31 seconds, ‘Our Way’ enters the fray to kick things off properly. It starts with a frosty guitar line, very old school black/death in tone before exploding thanks to some frenetic drumming from Dave Moulding and faster-paced riffing from guitarists Alex Butler and Nariman Poushin. At this point, vocalist Alex Butler delivers a deep, guttural death growl which shakes the earth. The pace slackens slightly to be replaced by a groovy and melodic riff that has burrowed right under my skin. The fact that it is overlaid by a much higher-pitched, raspy and thoroughly caustic black metal scream, only enhances its overall impact. There’s a nice moment of respite where the bass of Alan Webb comes through nicely in the mix before the track gallops to a close via some expressive and exuberant lead guitar work. Dare I begin to call this ‘nasty, feel good music’?

‘Scaling The Gods’ comes out of the traps like a scolded rat, full of energy and intent. Again, whilst it has extreme metal tendencies, there’s a playful edge to much of it, particularly when the guitars go all classic hard rock on us in the mid-section, complete with hand-clapping if my ears aren’t deceiving me.

The doom metal references loom large within ‘Unearth’ as the pace is slowed slightly, fed by twisted, vaguely discordant riffs before being replaced by a truckload of groove interspersed with moments of black metal malevolence or extreme death metal brutality.

For me, ‘Foreign Skies’ is the absolute high point within this excellent record. It begins in very chilled fashion, delivering delicate atmospheric melodies with gorgeous clean guitars and some stunning bass work. The heaviness comes in out of nowhere like a slap in the face. The guitars chug with menace one minute and then inject black metal voracity the next whilst the vocals are venomous either in black or death mode. However, the music retains its melodic edge wonderfully, occasionally reverting to the quieter intro melody to create variety and keep the listener fully engaged. The groove-laden chug at the mid-point is marvellous as is the ensuing riff which is equally groovy but more expansive and brimming with cheekiness. This is the kind of music that’ll have you grinning like a loon, trust me.

‘Grasping The Torch’ is thoroughly infectious thanks to yet more solid and commanding riffing. Out of nowhere the heaviness departs to be replaced by an all-too-brief jazz-tinged progressive interlude that calls to mind the likes of Opeth. However, just as quickly, this is eclipsed by one of the most thunderous sections anywhere on the record as the song powers to a conclusion. Naturally, as is the Ancient Ascendant way, the conclusion is reached via a few ubiquitous twists and turns fuelled by a large helping of daring do in the process.

If ‘The Great Curve’ doesn’t get you banging your head from the outset then the conclusion must be that you’re deaf, whilst it is left to ‘To The Cold’ to see ‘Raise The Torch’ to its conclusion, which it does with the kind of panache and uniqueness that is a hallmark of this album. Frequent shifts in tempo and a demonstrable classic heavy metal vibe supplement the more extreme elements. And the outro delivers a wonderfully dramatic and epic-sounding conclusion, just as it should.

To conclude, ‘Raise The Torch’ is a fabulous record. The music is hugely engaging and memorable but what I like most about it is that these guys clearly enjoyed making this music, they are assured and accomplished in what they are doing and it shows. Nothing is off limits for Ancient Ascendant and ‘Raising The Torch’ is all the stronger for it. What a record!

In the absence of a new track to bring you, check out ‘Driven By The Dark’, from the EP ‘Into The Dark’: