When I reviewed the previous Subterranean Masquerade album, ‘The Great Bazaar’, I came to the following conclusion in the final line: “‘The Great Bazaar’ is a very strong album. It’s varied, it’s intriguing, it’s powerful and above all, it’s wonderfully idiosyncratic.”

Fast-forward just two years and after spending some considerable time getting to grips with the band’s new record, ‘Vagabond’, I have to say that my thoughts towards it are frighteningly similar. When I was sent the promo by founding member and principle songwriter Tomer Pink, it was sent with the following comment: ‘Good luck, not an easy album’. And hell, he wasn’t kidding, I can tell you.

The thing that I liked so much about ‘The Great Bazaar’ was the way in which Subterranean Masquerade really went all-out to create something unique. They managed to bring an awful number of seemingly disparate ideas to the table, but made them work. What’s more, the album never felt disjointed or clunky in spite of the myriad influences at work within each composition. Again, the same is very true of ‘Vagabond’.

Since the last record, there has been a little tweak or two to the clientele within Subterranean Masquerade. The core of the band remains the same, with guitarist Tomer Pink at the helm, joined by guitarist Or Shalev, bassist Golan Farhi, keyboardist Shai Yallin and drummer Matan Shmuely (Orphaned Land). This time around however, Novembers Doom’s Paul Kuhr is no longer involved. Instead, Kjetil Nordhus (Green Carnation, Tristania) is joined on vocal duties by Eliran Wizeman, who delivers a frightful growl. In addition, Ilan Arad features in the line-up to provide the brass quota.

Those that know me and my musical preferences will now be expecting me to deride the band for the inclusion, and indeed the increase, of brass on this record. I have a rule: if the album contains brass, it gets deducted one point immediately. I just cannot stand brass. There are exceptions to every rule and in my case, Big Big Train are perhaps the most notable. With Subterranean Masquerade, my prejudices have been tested to the very limits. So prominent is the saxophone et al, that I did baulk at it in the beginning. Even now, I can’t help but wish that this element be reduced. However, I really like ‘Vagabond’ and initially I thought that was very much in spite of the brass. As it turns out, I have come to the surprising realisation that this is a necessary ingredient, without which the compositions and the whole essence of the music would suffer.

The growls of Wizeman and the strong guitar work of Pink and Shalev might mean that Subterranean Masquerade have a sheen of extreme metal about them, death metal being the most obvious protagonist. However, ‘Vagabond’ is much more extreme in terms of its bold ambition and it revels in being a hugely uplifting and positive-sounding record. The melodies that litter the album are really lovely, making the whole thing a warm and positive-sounding affair. In fact, I am struggling to think of a heavy metal album that sounds quite so ‘happy’, exuberant and fun. 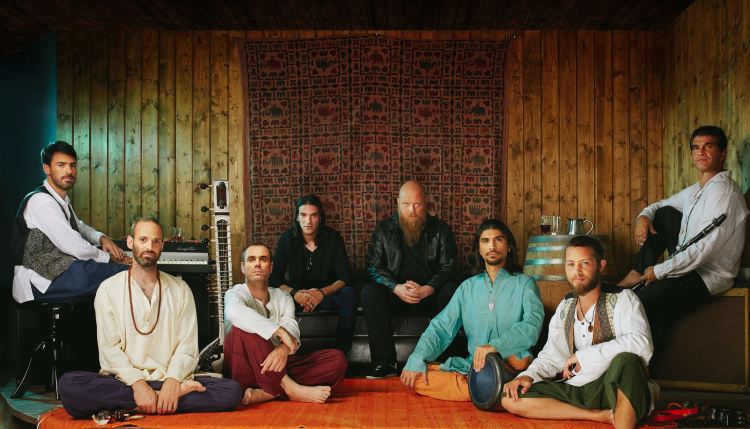 There aren’t many metal records that can have these three adjectives applied to it, but with ‘Vagabond’, they are well-placed and accurate. With the plethora of Middle Eastern influences and cheeky quirkiness within each composition, there’s almost a sense of carnival about ‘Vagabond’. I’m not entirely certain that the lyrical content always marries up, but this is the distinct feeling I get when I listen to this record.

The sounds of a bustling street accompany simple hand-clapping and a terrific Indian-tinged melody to open up the album via ‘Place For Fairytales’. The lyrical tip of the cap to the previous album is a nice touch too. It is a bright and breezy introduction that continues even when the heavier instrumentation eagerly enters the fray. It doesn’t take long until the brass makes a forthright entrance, but it fits with the care-free feel to the track. Female vocals, menacing growls, saxophone solos, chugging riffs, powerful drumming and strong 70s-inspired keyboard sounds all make their mark in an opening song that’s utterly glorious. I love the way it ebbs and flows whilst incorporating everything so smoothly and serenely. Even the saxophone solo atop the crescendo at the close is a thing of unbridled joy.

The clean vocals of Green Carnation’s Kjetil Nordhus take centre stage within the equally glorious and eccentric ‘Nomad’. Here is a highly underrated vocalist delivering some excellent vocals, so smooth and nuanced. I hear echoes of Amorphis in the key melodies but equally, there’s a hint of the avant-garde, reminiscent of bands like Knifeworld in the brass arrangements, as well as the injection of psychedelic ingredients. Again, the ethnic influences loom large, hardly surprising given the Israeli homeland of several of the members.

‘Ways’, a more ‘normal’ composition, albeit with jazz undertones then pushes me to the limits via a mid-section out of nowhere that I can only refer to as a brass-led oompah-like affair, conveying an almost comedic circus feel. In stark contrast, ‘Carousal’ is a two-minute instrumental, led initially by piano and strings for the vast majority once the Middle Eastern sounds die away. This is arguably the saddest-sounding composition, the most wistful and poignant, even if the final moments deliver another excellent quick-fire melody.

The shifting tempos and moods of ‘Kippur’ are intriguing, from fast-paced folk to the slower, heavier dirge of something altogether doomier. Once again, the melodies that feature in the expansive chorus are a delight and a much needed anchor for the listener, particularly when sandwiched between such an eclectic soundscape that incorporates Gothic synth-pop, ska, jazz and 70s progressive rock, not to mention the inclusion of an accordion. On paper, it shouldn’t work, but remarkably, Subterranean Masquerade pull it all together with aplomb.

The rhythm section really catches my ear within the extended instrumental of ‘Daled Bavos’; the bass of Farhi rumbles nicely alongside the more aggressive drumming of Shmuely. The swift ‘As You Are’ follows and has a bouncy rhythm and a tone that reminds me of Orphaned Land. ‘Hymn Of The Vagabond’ is the longest track on the record but it is fully worthy of its seven-and-a-half-minute length. In fact, it could have gone on for twice as long as far as I’m concerned. The track is equally as complex and multi-faceted as all of the others but what I like about it are those things that normally I’d shy away from, like the ethnic female vocals and the use of what I assume is a sitar. Those melodies are heavily Eastern-influenced but they are bold and rather irresistible.

The album then ends with a cover of David Bowie’s ‘Space Oddity’. I’m not the biggest fan of covers, but given the full Subterranean Masquerade treatment, complete with funeral doom intro, this is actually a pleasant surprise and a nice tribute to an iconic artist.

‘Vagabond’ is another triumph for Subterranean Masquerade, a definite step up from their last record. The members of the band may have changed slightly but the core feels like it is more stable and confident as a unit. This translates through the music without doubt; I have mentioned the fact that the music feels ‘happy’ and ‘fun’, but I get the distinct impression that the members of the band buy into this too and had fun making ‘Vagabond’. The only gripe I have mirrors that of their last: I want there to be more material on the album. Discounting the cover song, ‘Vagabond’ lasts for just over 40 minutes. It’s positive that we’re not left bored or confused by an over-bloated album but I’d have liked something this good to last a little longer. A double-album next time lads?