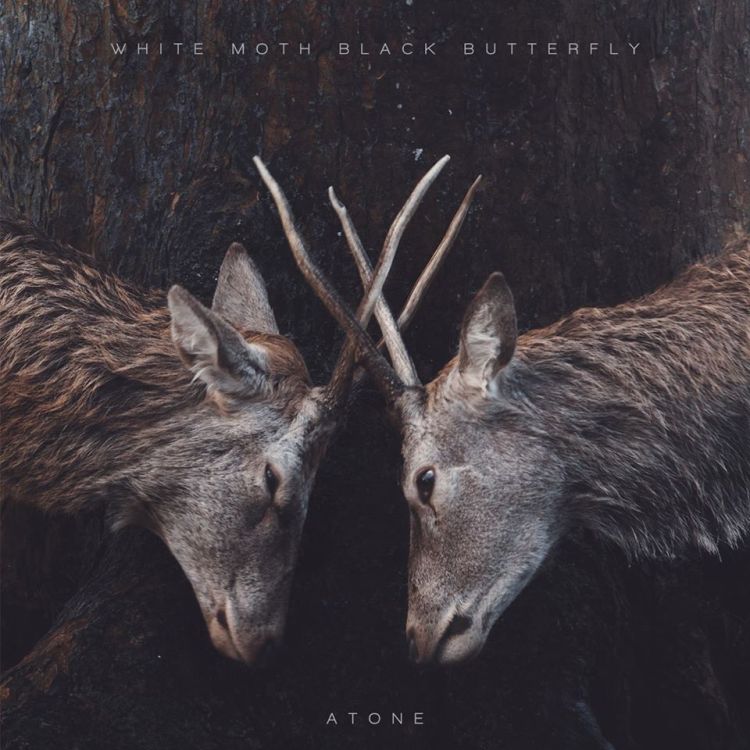 Before reading this review, you might like to take a look outside. In so doing, you might notice a few flying pigs, a blue moon or even the beginning of the end of the Universe as we know it. For the Man Of Much Metal is reviewing an album that isn’t metal. ‘So what, he’s done that before’, I hear you cry. Yes, but the furthest I’ve previously ventured is into the realms of melodic rock, AOR or pastoral progressive rock. Never before have I reviewed an album that explores such experimental realms, encompassing ambient sounds, classical music, cinematic soundscapes and even…breathe…pop.

But here I am, faced with such a recording in the form of the sophomore release from White Moth Black Butterfly entitled ‘Atone’.

Truth be told, had I not been sent this unsolicited, I may never have ever heard of the name White Moth Black Butterfly. And, if I’m being even more honest, had the name Daniel Tompkins not featured, I probably wouldn’t have given this a second thought. For a fan of progressive music, the TesseracT vocalist is too much of a draw to ignore; if he’s involved, I have to check it out. That’s not to say that I don’t like certain ambient and film score music, because I’m a sucker for the works of Sigur Ros and Craig Armstrong respectively to name just a couple. However, metal is where my heart lies and when I’m already drowning under copious amounts of new music within this genre, I haven’t the time to go searching in other directions.

The simple truth though, is that a cursory late night listen to this gorgeously-presented album hit me right in the feels like I was never expecting. I was exhausted and about to call it a night but something made me keep the headphones on a little longer and give this a quick go. Forty minutes later, I picked my jaw up off the floor, waited for the goosebumps to subside and very nearly pressed play again despite the late hour. The only adjective I could think off as I drifted off to sleep that night was ‘exquisite’.

Knowing nothing of White Moth Black Butterfly previously, I cannot comment on the debut album ‘One Thousand Wings’. But to be honest, that might be a good thing because I just want to talk about ‘Atone’ and its many, many incredibly powerful charms.

White Moth Black Butterfly consists of Tompkins alongside his Skyharbor colleagues Jordan Turner (vocals) and guitarist/programmer Keshav Dhar as well as keyboardist/programmer Randy Slaugh and drummer Mac Christensen. Together, they have managed to move me, open my mind a little further and essentially stolen my heart.

Within seconds of opening track ‘I: Incarnate’ beginning, I felt the magic and realised that my mouth was hanging wide open. I simply wasn’t expecting to hear something so delicate and so intensely beautiful. It lasts less than two minutes but in that time, I get chills aplenty every time I hear it. The rich orchestration speaks to my soul and the simple, uncluttered construction speaks more eloquently than most compositions twice its length. Tompkin’s voice is tentative, fragile and emotional, a wonderful counterpoint to the sumptuous, yet melancholy soundscape that envelops him.

By contrast, ‘Rising Sun’ is a little more upbeat in tone and ever so slightly progressive in nature. Christensen’s drums enter the fray for the first time, delivering an understated yet important heartbeat, whilst the guitars shyly add their voice. Again, the lush keys bathe me in a warm glow, whilst Jordan Turner’s angelic soft vocals that duet with Tompkins offers both a contemporary edge and an irresistibly ethereal beauty to the highly melodic and memorable piece.

The striking simplicity of the piano that ushers in ‘Tempest’ carry echoes of Anathema but these thoughts are quickly forgotten as Tompkins treats us to a masterclass of intense emotional singing. In this form, I could happily listen to him all day and, to some extent, that’s been true over the last 72 hours. The multi-layered textures at work as well as the clever ebb and flow between minimalism and controlled exuberance mean that this is easily a personal favourite.

‘An Ocean Away’ maintains the incredibly high quality of ‘Atone’ almost effortlessly. The sombre strings that bring it to life are superseded by a simple but bold programmed beat, the kind of thing I’d normally shy well away from under normal circumstances. But rather, it acts as a hypnotic heartbeat around which further lush orchestration and strange modern sounds and samples draw me in like a moth to the proverbial flame. And as superb as Tompkins sounds at the outset, it is Turner that then steals the show with a sensual and breathy performance that washes away all my cares in the world.

I earlier mentioned the work of Craig Armstrong and ‘Symmetry’ could easily have been penned by the film score maestro. The dark and evocative cinematic drama is stunning, a theme that is carried into ‘II: Penitence’ which ends with the sounds of shouting, gunfire and aircraft, an intriguing juxtaposition to the delicate and soothing sounds of plucked strings that initially brought it to life.

The melodies that feature throughout ‘Atone’ are gorgeous but ‘The Sage’ offers some of the best. The vocals of Tompkins have to be heard to be believed, whilst the Oriental flavour at the midpoint is a masterstroke. If this song is playing, be it in the car or on headphones late at night, I stop what I am doing, close my eyes and revel in its indescribable beauty.

The title track offers another opportunity for Jordan Turner to unleash her devastating hushed tones, whilst Tompkins in contrast delivers some of his most powerful and commanding vocals, all atop more dramatic cinematic textures that are a genuine delight.

And then, once the ambient and occasionally unsettling tribal-sounding minimalism of ‘III: Deep Earth’ departs having left an indelible mark on the listener, ‘Atone’ closes with ‘Evelyn’. Complete with operatic vocals and plenty of inter-song diversity, it rounds out the album in suitably rich and striking fashion – a satisfyingly deep and diverse conclusion to a wonderfully diverse record.

And yet, in spite of the variation and contrasts at work within ‘Atone’, this record feels remarkably fluent and cohesive. It is the hallmark of great musicians if something like this can be achieved. It is the hallmark of near-genius when such experimentation sounds so utterly beautiful and soul-enriching as is the case here. Take a bow White Moth Black Butterfly because genres be damned, you have unquestionably delivered one of the very best albums of the year.