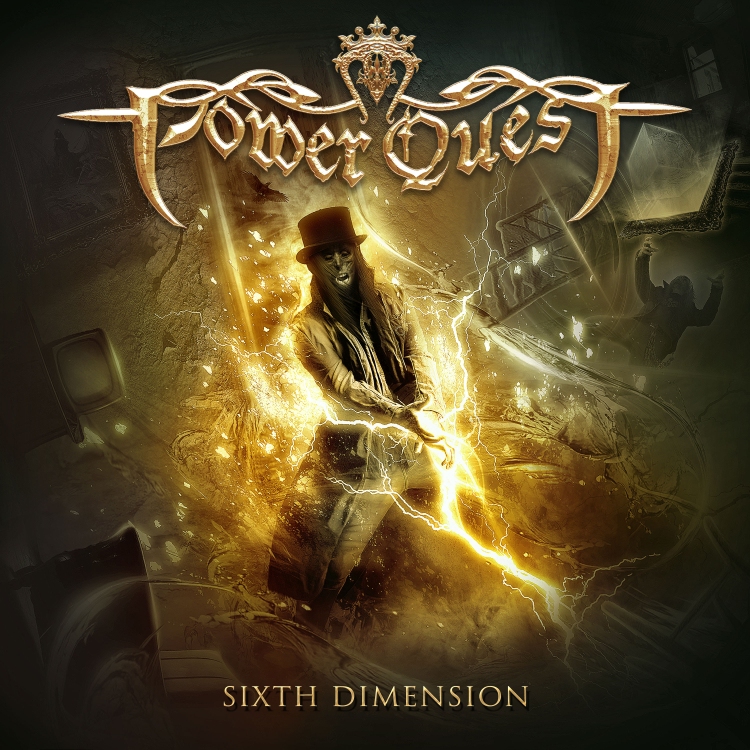 I feel a bit of a fraud reviewing this record, because until now, I had never really given UK power metal band Power Quest the time of day. I knew the name, I had heard the odd track but I was never sufficiently moved to go any further than that. I’m not sure why though, because in theory, Power Quest should really scratch the itch I get for power metal, particularly of the more melodic kind.

Still, better late than never and here I am confronted with ‘Sixth Dimension’, the sextet’s sixth studio album. You might be wondering ‘why now?’ In all honesty, there are two strands to my reply. Firstly, this is the band’s first album for six years having disbanded in 2013, citing financial problems and lack of record label support as the reasons for the split. Secondly, being a huge fan of the sadly-defunct Triaxis, I felt I had to check out the new home of lead guitarist Glyndwr Williams because a guy of his immense talent wouldn’t join a bad band.

In actual fact, the Power Quest line-up of 2017 is really quite different from when they split. Only keyboardist Steve Williams remains from the original 2001 incarnation of the band and he is joined by his pre-split colleagues, bassist Paul Finnie and drummer Rich Smith both of whom date back to 2009. Everyone else is new though, meaning that Williams has a six-string partner in Andy Kopczyk whilst Ashley Edison is the new lead vocalist, stepping into the shoes of the likes of ZP Theart (ex-Dragonforce, Skid Row), Chitral Somapala (ex-Firewind, Red Circuit) and Pete Morten (ex-Threshold, My Soliloquy) who have held the position previously.

Essentially, I have had my head turned quite a bit by ‘Sixth Dimension’ and find it to be a really satisfying and fun listening experience. Some will inevitably consider the output to be a little cliched, perhaps even a little cheesy. After all, what Power Quest deliver is a heavy dose of classic melodic power metal, drenched in keyboards, liberally sprinkled with flamboyant lead guitar solos and topped off by lyrical content that suggests that however bad our lives are, tomorrow is another day and things can get better.

Yes the lyrical content could be considered a little toe-curling but the thing is, Edison has a superb voice, perfect for the music that surrounds him. He has a great range, able to hit the trouser-splitting high notes whilst dealing expertly with the lower, more reserved passages. I find his delivery to be extremely smooth and rich.

And yes, each of the nine compositions sticks firmly to that classic power metal recipe, with giant hook-laden choruses, driving rhythms and big riffs. But again, it is all delivered with slick professionalism and with a smile on their collective faces. ‘Sixth Dimension’, which benefits from being mastered by the renowned Jens Bogren, sounds like a happy, fun record and it is meant to, I’m sure. I’m a big fan of melancholy music, just like the next metalhead. But I also like to listen to upbeat, feel-good music occasionally and that’s where albums like this come in. Badly-done cheese is awful, yes. But ‘Sixth Dimension’ is not badly done and it is definitely not cheesy in my view. It is undeniably a high quality record in just about every department.

A lot of credit has to go to Power Quest stalwart Steve Williams because his keys are an utter joy throughout. They don’t sit unobtrusively in the background like the reticent wallflower at a house party. No, the ivories are the life and soul of the party, providing bold atmosphere as well as leading many of the strong, memorable melodies that feature on just about every track. I challenge you to listen to the superb ‘Pray for The Day’ for example without breaking into a smile. The synth tones remind me of the 80s and create a melodic hard rock/AOR sheen to the composition that I find truly infectious.

And yet, Williams and Kopczyk manage to provide enough grunt and power to give the songs the necessary crunch required of a heavy metal band of any genre. Backed up by the energetic combo of drummer Rich Smith and bassist Paul Finnie, the whole thing just hits the right note overall. The glorious ‘Coming Home’ acts as the justification for what I’m trying to say here because the rhythms are frenetic and they dovetail wonderfully with the more soulful and nuanced lead work from the guitars in places.

To be honest, I am more than a little surprised at just how consistent the quality is across ‘Sixth Dimension’. There seriously isn’t a duff track anywhere to be heard. That said, personal favourites include ‘Starlight City’ with its positive energy and killer epic conclusion and the gloriously outrageous keyboard-led melodic pomp of ‘Kings and Glory’ that reaches Dragonforce speed and contains monstrously catchy hooks throughout, not to mention plenty of lead guitar flamboyance. Then there’s the muscular riffing of ‘Revolution Fighters’ and mid-tempo stomp of ‘Face The Raven’ which blossoms into a superbly irresistible chorus led expertly by Edison who scales the heights effortlessly. Or how about the closing epic title track, co-written by Threshold’s Richard West, that’s intense and brooding, and includes a guest vocal appearance from ex-Nightwish chanteuse Anette Olzon? Full of light and shade, it is a fittingly commanding and atmospheric way to bring ‘Sixth Dimension’ to an end.

Occasionally, I want to listen to something a little bit frivolous, something that I don’t have to think to deeply about, something that entertains me right from the very beginning and which plants a great big smile on my ugly mug. If you’re searching for something similar, I cannot recommend ‘Sixth Dimension’ more highly. This is slick, professional and thoroughly irresistible melodic power metal of the highest order.