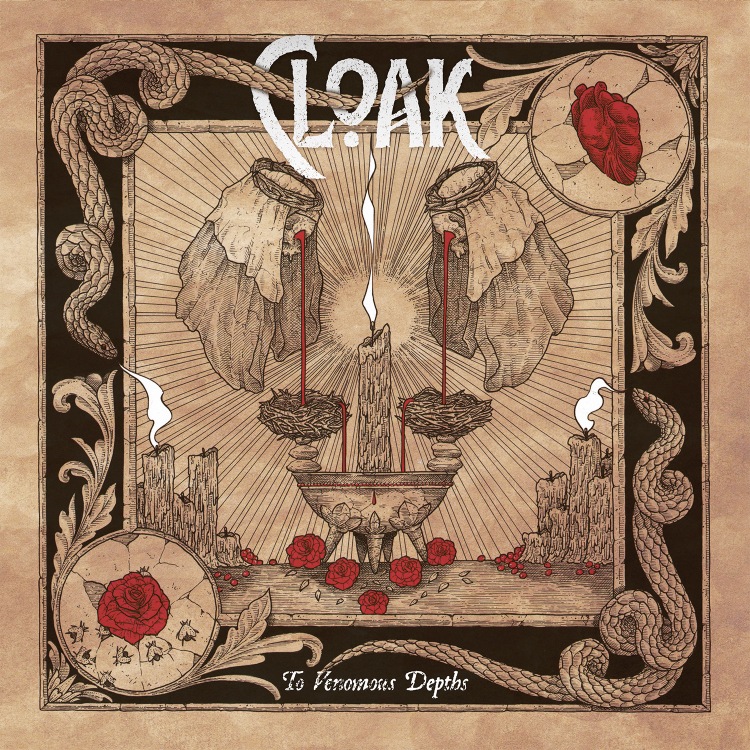 To score a record deal with a label as well-respected as Season of Mist without anything approaching a full-length album in the locker is an impressive feat. It’s better than that for US metal band Cloak though, because the contract was formed on the basis of just a two-track demo and, one assumes, their live offering, having shared the stage with Wolves In The Throne Room, Inter Arma and Taake to name a few. Knowing this, it has me immediately under the impression that there must be something about Cloak worth checking out and after spending a little time with their debut album, ‘To Venemous Depths’, my suspicions have been proved right for the most part.

It comes as a surprise to learn that Cloak hail from Atlanta, Georgia because the style of music that they play owes a greater debt to the Scandinavian countries of Sweden and Norway than it does to the United States. I have seen Cloak referred to in many ways during my research into the band, from ‘black ‘n’ roll’, to ‘blackened death rock’. However, it all amounts to roughly the same thing. Cloak take the trappings of black metal, a touch of death and then blend it with the attitude and energy of heavy rock.

This style of music has been done before. Many times. Latter-day Dissection, Tribulation, and Watain are almost certainly names that other reviewers will have mentioned as reference points because the substantial shadows of these acts loom large over the material on ‘To Venemous Depths’.

This isn’t meant as a negative necessarily, because I enjoy the output of all of these bands, albeit some more than others if I’m honest. It just means that this review is tempered slightly by the caveat that the final product is not overly original or ground breaking. What it is though, is very well executed and well-written, so that it has plenty to say and shows a great deal of raw ability that, I sincerely hope, will be exploited more fully in future releases.

Back to the present though, and it is not difficult to understand why Season of Mist took a punt on this young quartet, even at this early stage of their career. The compositions may be a little derivative in places but overall, there is a lot of enjoyment to be had within the nine meaty tracks that make up this debut album.

The quartet’s hunger and ambition can be heard, writ large across opener ‘To Venomous Depths Where No Light Shines’. It bristles with a dark malevolence one minute, led by frosty staccato riffing and an eager beat courtesy of drummer Sean Bruneau only to break out of the clandestine shackles in the next breath, launching into something immediately irresistible, groovy and headbang-worthy.

‘Within The Timeless Black’ begins in thunderous fashion, to maintain the impressive momentum. Scott Taysum’s vocals act as the caustic topping to the muscular riffing and bold melodies that emerge from the depths as the track develops.

For my money, the best of the material on ‘To Venomous Depths,’ can be found at the record’s mid-point. ‘Beyond The Veil’ is infectious as hell, with a huge anthemic melody to open. The pace frequently alters but the melodic intent remains for the duration, creating a memorable composition that begs for repeated spins. I also enjoy the way in which the intensity fluctuates, with a brooding mid-section that only serves to make the final moments, led by expressive lead guitars, even more impactful.

And then, to follow, ‘Death Posture’ maintains the accessibility and infectiousness of its predecessor. The bass rumble of Matt Scott is prominent as the song starts off in a deliberately brooding manner, full of oppressive atmosphere. The riffs, when they emerge are groovy and deliver an unmistakeable rock ‘n’ roll swagger, although they cleverly alternate between this and more of a spiteful black metal approach.

The ten-minute closing track, ‘Deep Red’ showcases Cloak at their epic best too. The way in which the mood alternates from cheeky rock, to subterranean murkiness is very smooth and occasionally, almost imperceptible. The rhythms from Scott and Bruneau as the song reaches its finale become increasingly frantic, only to fall away at the death to allow a gentle acoustic guitar to lead the band into the night.

One of the best elements that emerges from this record as I listen more frequently, is the guitar work of Taysum and his six-string partner-in-crime Max Brigham. The leads are expressive, atmospheric, often melodically-charged and always striking and ear-catching. The way in which they sound catchy but also sinister is a clever feat and one that makes the listening experience that little bit more compelling.

Ultimately, ‘To Venomous Depths’ is an extremely successful debut, not least because it whets the appetite for future endeavours. But more than that, it lays a more-than-solid foundation upon which these four Americans can build and, in the process, gives listeners something really enjoyable to wrap their ears around. If ‘black ‘n’ roll’ is your thing, Cloak is a name that you need to have firmly on your radar.

The Score Of Much Metal: 8