Welcome back! Not put off by the first pick in this year’s top 30? Well, it’s early days, so I’m sure I’ll annoy someone before long.

As I stated in the opening post, I am hoping to keep this countdown in line with previous years, namely streamlined and to-the-point. Having reviewed every album in this list, I will use quotes from the full reviews, give links to it, provide an embedded song wherever possible and explain a little more about the album and why it deserves a place in my top 30.

If you have missed any of the previous posts in this series, links can be found at the bottom of this post along with links to the entire countdowns from previous years. Don’t say I never treat you!

I’m really excited to bring you today’s pick, so without any more waffle, here goes… 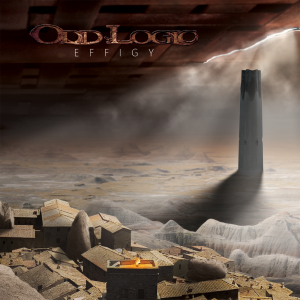 “‘Effigy’ is impressive in terms of its overall smoothness or illusion of smoothness. This record is the aural equivalent of liquid gold; it is rich, lush and incredibly atmospheric. This is all the more remarkable given the overt heaviness that is displayed throughout the record at certain points, not to mention the technicality and complexity as well.”

‘Effigy’ is yet another step up for Odd Logic, a progressive metal band that has so far eluded many a radar. Quite how is beyond me, as ‘Effigy’ is a superb slice of prog metal that sits alongside some of the genre’s best and deserves to be heard by the widest of audiences.”

I remember the feelings that coursed through me when first I discovered American progressive metal band Odd Logic. Mind you, it was only last year! ‘Penny For Your Thoughts’ put a great big smile on my face, gave me goosebumps and immediately made me wonder how on Earth the quartet were not more well-known. Heck, even I have more followers on Facebook than these guys!

A year on and here we have the follow-up, the first album that’s a true, bona-fide band effort. Any worries about Odd Logic rushing things and not delivering the goods were expunged about half-way through the gargantuan 17-minute opening title track. ‘Effigy’ delivers some sublime progressive music with both crunch and sophistication.

As I have said many times before, my website is all about supporting music that is deserving of attention. It doesn’t matter how big or small the band – if it’s good music, I will feature it. So it gladdens my heart that someone like Odd Logic have recorded an album that is genuinely worthy of a spot in this list. Rich, varied and intelligent, ‘Effigy’ has to be the album that takes Odd Logic to the next level. And I won’t shut up until this band achieve a little of the success their talent honestly deserves.

I implore you to take a listen and, if you like the sounds that Odd Logic make, why not support them by spreading the word, or making a purchase?