I’ve mentioned this before a few times but the difference between a very good album and a great one is the way that the music makes you feel. All of the money, technical prowess and musical know-how are rendered obsolete if the final product fails to make an impact. But more important still, is whether the music is capable of moving the listener. I’m not talking about making them dance or headbang, although these elements can be important. I’m referring to whether the music has an emotional effect on those that listen.

Speaking personally, the greatest albums in my collection are those that have left an indelible mark on my psyche, the ones that are more than just great music. ‘Weather Systems’ by Anathema, ‘In Search of Truth’ by Evergrey, ‘Mercy Falls’ by Seventh Wonder, ‘Last Fair Deal Gone Down’ by Katatonia; these are all special to me because they have the ability to raise feelings within me that might otherwise remain locked up and ignored.

Today’s pick at number three falls into this category and it is entirely because of its emotional depth that it finds itself so high in my 2017 list.

The ubiquitous quick reminder that links can be found below for all of my previous posts in this year’s series, along with a couple of ‘honourable mentions’ posts and the entire series from 2012-2016. If you explore any of these, I hope you enjoy what you read. 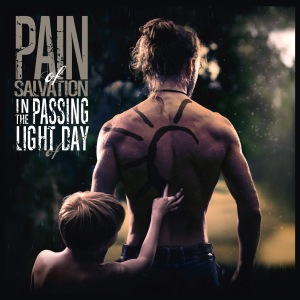 Pain of Salvation
In The Passing Light of Day
InsideOut Music

“Pain of Salvation and founder Daniel Gildenlöw in particular have never shied away from confrontational issues be they inspired by personal experiences or otherwise. This record is no different as the catalyst has been Daniel’s own medical problems of late. And when I say ‘problems’, I am understating things drastically as he nearly died. As such, it is hardly a shock to note that ‘In The Passing Light Of Day’ is a dark and claustrophobic, gritty and raw record.

That being true, there is also a sense of positivity that runs through this album, like a delicate gossamer thread of hope, of light, of better things on the horizon. In many ways, this added ingredient just makes the album even more of an emotional rollercoaster for all concerned.

In progressive music terms, I am still in the early days of digesting the music having only listened to it for three weeks but in that time I have listened to little else it has to be said. Is it their best work to date? That would be a big call to make at this stage but it certainly ranks highly in my estimations.

Given the subject matter, the return to heavier climes is a perfect fit, accenting the anger, despair, and frustration of the central themes very well. However, this isn’t a one-dimensional heavy album. It flows from all out bombast to sections of intelligent complexity to quieter more minimalist landscapes and back again as the mood of the tracks dictate. And what I really find intriguing and enjoy more than I thought is the fact that the band have not completely ditched the sounds and textures that were explored on the ‘Road Salt’ albums.

…listen carefully enough and there are influences to be heard from all corners of the band’s rich history. It is a clever trick when the band itself is markedly different in 2017.

2017 may have only just begun but Pain of Salvation have laid down the marker for all others to reach. After a few releases that didn’t move me, ‘In The Passing Light of Day’ has redressed the balance and then some. If this is what intelligent and emotional progressive metal sounds like in 2017, I don’t want the year to ever end.”

This was the first album that I reviewed in 2017. In fact, I was actually listening to this album and formulating my review before the close of 2016. And, prior to hearing this release, I had all but given up on the Swedish band. The direction in which they had been heading over the past few releases was not to my personal taste and, despite being decent albums in their own right, they did nothing for me.

Enter ‘In the Passing Light of Day’ and with it, a return to the love that accompanied the likes of ‘The Perfect Elemet Part 1’ and ‘Remedy Lane’. I was overjoyed when I heard the lead single, the killer ‘Meaningless’ as it turned the vague rumours of a return to heavier climes into a full-on screaming reality.

However, I must make it perfectly clear that the reason for Pain of Salvation’s lofty position is not just because of the increased heaviness and a return to a more metallic output. For my personal tastes, it naturally helps but there is so much more to ‘In The Passing Light of Day’ than beefier guitars, more powerful, bolder rhythms and vocal aggression, all of which are wonderfully present and correct here.

In addition, the album has a certain vibe to it that I find utterly irresistible. The darkness, the despair, the frustration and ultimately the beauty and the sense of hope and optimism – it all combines to create an album that has lashings of atmosphere and palpable rawness that together, pulls me through the ringer. One several occasions, this grown man has openly wept as I have listened to certain tracks.

At the time I wrote the review, I was suffering a bereavement and I felt that perhaps the strength of this album was being artificially skewed by my already dark and fragile mood. This wasn’t the case because almost a year on, the music continues to have a profound effect on me.

The fact that you can feel the pain and anguish in Daniel Gildenlöw’s voice as he sings about the dark times that he has experienced of late only adds to the authenticity of the material. This is by far and away the most intense and thought-provoking record released all year. It is also the most honest collection of songs I have heard for some time.

And the fact that this emotional depth is wrapped up in some stellar music only serves to make it the utter triumph that it is. I will admit that I am not so keen on a couple of the tracks as time has worn on and that has perhaps led to the record not achieving top spot this year given the strong competition from all quarters. However, ‘Meaningless’, ‘Angels of Broken Things’ and the epic title track are some of the best, most satisfying and engrossing compositions released all year.

Pain of Salvation never really went away, but I can’t help but say: ‘welcome back boys, you’ve been missed’.