It is fair to say that I have been thoroughly smitten by ‘Currents’, the wonderful fourth album from Norwegian extreme metal band In Vain. To quote my recent review:

“If ‘Ænigma’ demonstrated that In Vain had the genuine potential to challenge at the highest level, then ‘Currents’ is the sound of that potential realised. This is a huge album, full of all the things that I love in my extreme metal, as well as other things I’d not really thought about, demonstrating a streak of originality to keep things fresh and exciting. In Vain have announced themselves on the biggest stage in real style and they deserve the plaudits coming their way with the magnificent ‘Currents’.”

I naturally jumped at the chance to delve into their world and find out a lot more about the band. I’m not normally a fan of the question/answer format, but I’m really pleased with how it worked out, thanks to some excellent responses from guitarist Johnar Håland and ‘new’ bassist Alexander Bøe.

Grab a beer or a coffee and check out what they had to say right here: 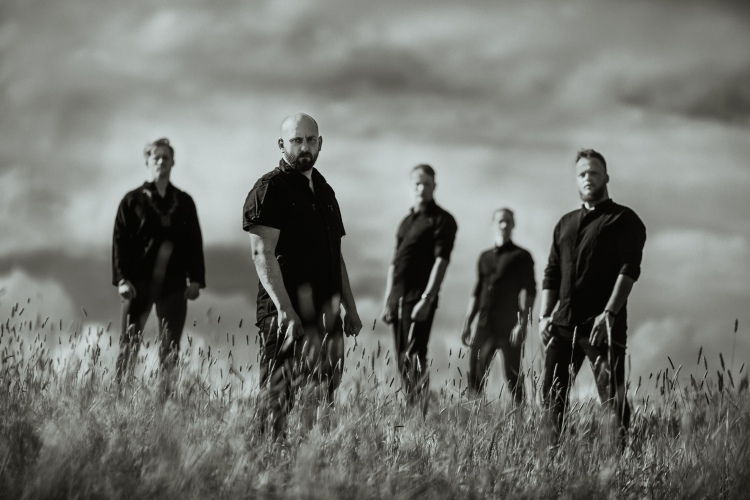 What was it that inspired you as musicians to start the band in the beginning?

Johnar: In Vain started out as a school project back in 2003, when I was a student at a music school. In one of the classes everyone had to record a song in the school’s own recording studio. For a while I had played around with the idea of starting a metal band together with my friend Andreas (Frigstad – lead vocals), who was a diehard metal head at that time. Having this school project actually sparked the creation of what later became In Vain. I had never played metal before, but put together some riffs which ended up as the track ‘As I Wither’. Andreas wrote the lyrics and did the vocals. ‘As I Wither’ was the first song we ever recorded and that song actually ended up on our debut album ‘The Latter Rain’ from 2007.

What, in your opinion, makes In Vain different from every other band out there?

Alexander: I believe In Vain has a unique sound. It’s both surprising and recognisable at the same time. The riffs are both catchy and intense, but when you think you know what’s coming, we suddenly change the pace. Fans know this and they expect it, but for new listeners it can be an interesting first listen. The sudden changes between the straight-up metal parts and the melancholic and calm parts are unexpected, and that is what In Vain is about.

I hate to try to label bands into genres, and you use the words ‘catchy, intense and unusual’ – is that the closest we will ever get to a description of In Vain’s music?

Alexander: Yes, it is! And don’t forget ‘cool’!

Johnar: To be honest, I think it is hard to give a definite description of our music myself. We label it progressive extreme metal. The term ‘progressive’ is used in the sense that we mix sub genres, mix different vocal techniques, etc. Extreme metal is just something I look as a common for genres such as Black, Death, Doom, etc and in our career we have made tracks in all those styles.

Tell us about the new album, ‘Currents’ – firstly, please talk to me about the music and how does it differ from previous albums? 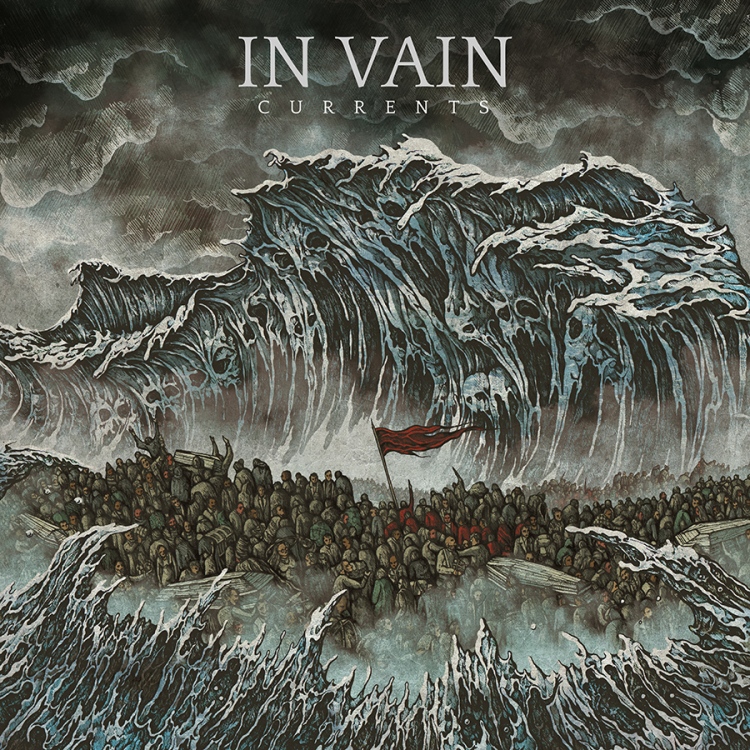 Alexander: Some of it isn’t very different from the previous albums. I guess it’s our job to make new tracks that sound like In Vain, but also challenges how people already know In Vain from before. With both a new bass player (myself) and the crazy Baard Kolstad on drums, the sound also changed a bit. My focus on the bass lines was to steer away from the usual machine like bass lines which only follow the guitar, to a style in which I tried to colour the riffs with fills and other notes to what the guitars were playing. I feel this album gathers instruments that compliments each other, and gives room for what’s important in the songs.

Personally, I hear more variety between songs and within the songs too – everything from straight-up death metal to more subtle and gentle soundscapes – would you agree?

Johnar: I do not agree that there is more variety on this album than in the past. To be honest, I think our music has been very varied from the outset, and we continue on that path with ‘Currents’.

Again, personally, some of the melodies, both musically and vocally are stunning – is this sense of melody important to In Vain or is it just a happy accident?

Johnar: We are suckers for good melodies, but there is a fine balance between cheesiness and catchiness. We try to avoid the first one and focus on the latter. When it comes to clean vocals we have always been a fan of big vocal arrangements and melodies that stick in your mind and hook the listeners. That interlocks well with the more aggressive parts.

Did it turn out how you hoped? Has it turned out better, worse, or just different?

Alexander: In my opinion – better. The tracks are very diverse. The drum and bass have a great connection. The riffs themselves are heavier than before. Sometimes in a recording process it’s easy to forget how the final product might sound like, and it turned out great.

Johnar: We are very happy with this album and I think it is the best production we ever had. I do not have any opinion on whether it is better than our previous albums or not. I do not compare and rank music in such a way. It is not like sport where you clearly can state who is number 1, 2, etc. ‘Currents’ is another strong album in our catalogue, and that is how I view it. Some might like it more than our previous album and some might like it less. It is always going to be like that.

What aspect, big or small, are you most proud of with ‘Currents’?

Alexander: That I had the opportunity to make the bass lines as fluent and varied as I did. I made sure I listened and studied the drums so that we go hand-in-hand for pretty much the entire album. As this is the first album with In Vain that I am a part of, it’s very cool that I can hear ME, and not just some booming in the background.

Where do you get your inspiration from?

Alexander: I don’t think I can pin point exactly where we get our inspiration from. As I mentioned, we as musicians are so diverse, both in style and taste. Some of us are heavily inspired by black metal, and some of us play djent and prog. I guess that’s what makes our music so recognisable and different from the rest. It’s hard to set words to what we sound like, but that is kind of why people like us I guess.

How does In Vain compose music? Is it one person or a process that allows the whole band to contribute?

Alexander: It’s basically all Johnar’s work. He composes and makes the drafts for the tracks, but we provide our own touches and suggestions along the way. The final product is the sum of that. It’s a collaboration of everyone with one guy on top to make sure that there is a red line and that we’re getting somewhere.

I understand that the lyrics seek to explore ‘colossal shifts and changes of our time’ – can you tell me a little more about this loose concept, please?

Johnar: ‘Currents’ is not a concept album in the traditional sense, however there is a topic and a red line in the music, lyrics and artwork. As you say, ‘Currents’ reflects on the colossal shifts and changes of our time. The present world is characterized by continental flows of people, traditions and cultures, of migration of people across continents and borders and of cultures merging. These are all currents – movements that distort old patterns, create tensions as well as new opportunities. This topic exists in both the lyrics and the music. However, we touch upon it in an abstract way with a top-down view. It is important for me to clarify that we do not have any direct political views on this matter reflected in our lyrics.

How did you convince Baard Kolstad (Leprous, Borknagar) to play the drums? He is one of the best drummers out there right now and an extremely busy chap.

Johnar: Not long before we were going to enter the studio, our permanent drummer (Stig Reinhardtsen) was forced to quit the band due to personal reasons. So we had to come up with a replacement at short notice and Baard was a logical choice. Baard had already played with us live for years and is an absolutely amazing drummer.

The big question – what are your realistic long-term goals?

Alexander: It’s not always easy to predict how the future will turn out. We focus on what’s now, and our upcoming European tour with Orphaned Land. We have a couple of festivals in Norway in the spring, but we are optimistic that this will be a busy year.

Johnar: We hope to continue to release good music and have fun together. A long term goal would be to play outside Europe one day. What does ‘success’ for In Vain mean? Are you heading for private aeroplanes or do you have more modest goals?

Alexander: We already have a private plane for each band member, so that is just the lifestyle we’re already used to! But, success for us is also good feedback from fans – and people that are new to the In Vain crew. As long as people turn up for our gigs and appreciate our music, everything else is just a bonus.

When you look back on your career in years to come, what is it that you think will be your fondest memory?

Alexander: In my opinion it has to be our show on Brutal Assault 2013. We played a packed tent with more than 2000 happy metal heads. One of the sweatiest and most energetic experiences I have ever been a part of!

What are your touring plans? Are you coming to the UK?

Alexander: We will head out on a tour with Orphaned Land from 24 February – 4 March, and Monday 26 February you can catch us in London at the Underworld. We hope we’ll see as many of you readers as possible to make this a new memory in In Vain’s history!

When your focus is not In Vain, what do you all do with your time?

Alexander: Personally I’m a full time student in a musical theatre school in Oslo. I’m currently in a production of ‘Grease’, and we’re playing for full houses in Oslo. It’s kind of a gap between being a metal head and a musical artist, but…that’s just how it is. The other guys are fathers and family guys, so we’re pretty much living double lives!

Thanks guys, for some great responses to my questions. Is there anything else that you would like to say? Manofmuchmetal.com doesn’t believe in word limits, so here’s your chance to ‘go nuts’!!

Alexander: Thanks a lot for our time and support. To the people out there, that haven’t heard our new album “Currents”: Please check us out! And to the ‘go nuts’-part, I would like to say: “Yeah, buddy! Peace!”

‘Currents’ is out now on Indie Recordings.