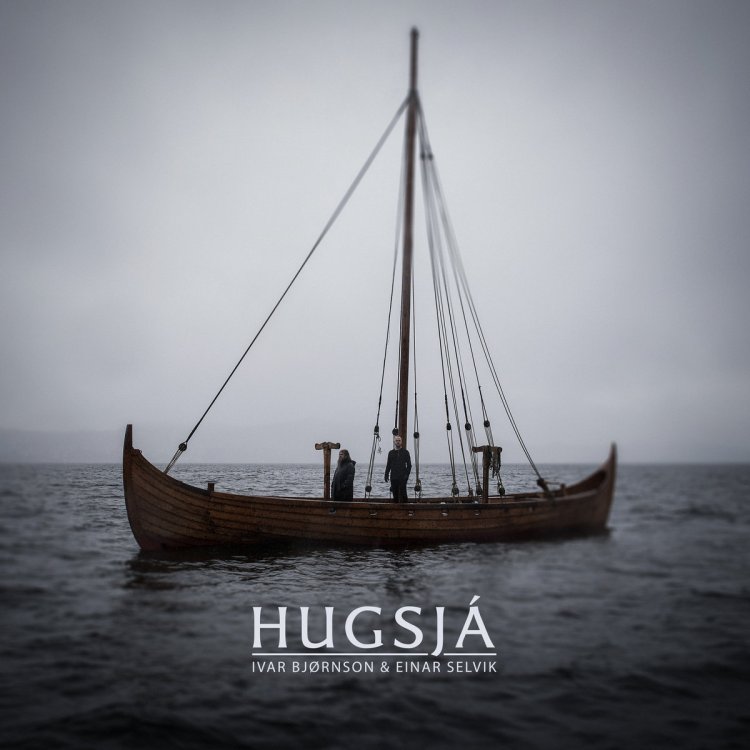 A significant change of career and continued parental responsibilities means that I am still playing catch up with my reviews at this congested period of the year. As such, the album central to this review has already been released. It’s intensely frustrating that this is the reality with which I am faced, but sometimes life gets in the way of one’s hobby, however important that hobby might be.

That said, the positive to this is that I have had a little more time with this record than I might otherwise have had. And in this case, that’s a huge bonus indeed. In fact, it is in the last few days, generally late at night, that the magic of this record has truly begun to emerge. As such, what follows is a significantly different review to that which would have been published a week or so ago.

The album in question is entitled ‘Hugsjá’, the second full-length release from two highly-regarded musicians in metal circles, namely Enslaved’s Ivar Bjørnson and Wardruna’s Einar Selvik. The two came together around 2014 and released ‘Skuggsjá – A Piece For Mind & Mirror’ two years later. But for many reasons, it was a release that completely passed me by. I’m not generally the biggest fan of folk music in all its forms, and so the fact that ‘Skuggsjá’ was billed as a folk record was arguably the biggest reason for my failure to check it out.

This time around, curiosity got the better of me and I checked out ‘Hugsjá’ the moment that I was offered the promo. It was curiosity built around the name of Bjørnson, as I’m a huge fan of Enslaved. Selvik, I will admit I’m less familiar with as I haven’t traditionally been much of a fan of Wardruna. It was also curiosity piqued thanks to the artwork for the album, artwork that features the evocative black and white image of a traditional Nordic sailing boat on apparently calm waters with both Selvik and Bjørnson aboard.

Curiosity may have killed the proverbial cat but on this occasion, it has led me to one of the most magnificent discoveries so far in 2018 and beyond. I have a strong emotional bond with Scandinavia and so I have ultimately found this record to be a powerfully intense listening experience. But even had that bond not been so strong, I am certain that the music would still have has a profound impact upon me, such is its authenticity, rawness and rugged beauty. Included within Selvik’s repertoire and therefore featured on this record are instruments such as the taglharpa, kravik lyre, goat horn, birchbark lure and bone flute. So when I said ‘authentic’, I meant it.

I find ‘Hugsjá’ to be something of a hypnotic listening experience too, almost meditative in places, given the calming influence that it is on me. To illustrate my point, take ‘Nytt Land’ as one of many perfect examples. The track, one of three in excess of seven minutes, features a throbbing bass guitar that rumbles beautifully with a gentle recurring pulse, whilst the guitar delivers a simple, repeated melody to compliment. Drums provide a steady beat and when joined by Selvik’s rich, melodious voice, it all comes together to create that strangely hypnotic sensation. The song breaks out of the cycle occasionally and also introduces plenty of authentic instrumentation, but the core remains and it’s a delight to immerse yourself within it. 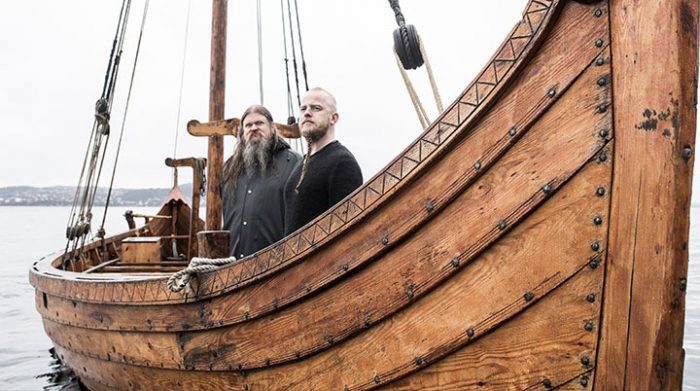 ‘Nytt Land’ is also a good example of the fact that ‘Hugsjá’ isn’t a pure, out-and-out folk record either. There are plenty of subtle ingredients that ensure that there’s a nice balance between authentic Norse folk music and rock of the progressive variety. AC/DC this isn’t, but the intelligent use of Bjørnson’s guitars and bass alongside the drums within some of the compositions lends the material a more robust, imposing quality alongside a sense of greater power and urgency. Penultimate track, ‘Oska’ encapsulates much of this within its substantial length.

However, as far as I’m concerned, it is the strong compositional nous of the duo and their ear for a strong melody that makes ‘Hugsjá’ such an amazing record. There literally is no track on the album that threatens to lower the quality or ruin the flow; every song eventually delivers an earworm or two – it might take a bit longer for some to come to the fore than others, but they are there and it’s a heady feeling when they finally make their mark.

I’m fairly certain that the opening title track is book-ended by the sound of a bullroarer, an ancient method of communicating over long distances, although I could be wrong of course. In between, is the most intoxicating of songs, dark in tone with a strong percussive, tribal-sounding beat. But the combination of evocative, almost melancholy melody and heartfelt singing from Selvik means that it sends shivers down my spine every time I listen, whilst I picture an unforgiving and rugged Scandinavian vista in my mind.

The die is cast and what follows is every bit as intoxicating. ‘WulthuR’ is a great blend of ancient instrumentation and modern influences as the opening moments see a duet of sorts between what I suspect is the goat horn and an up-tempo drum beat. Selvik’s vocals aren’t quite so prominent here, and he is joined in the latter stages by the low hum of voices as the slightly more upbeat piece drives powerfully to its conclusion.

For my personal tastes, the double-header that’s ‘Ni Døtre av Hav’ and ‘Ni Mødre av Sol’ are the stand-out pieces on this already impressive album. The former track is translated as ‘nine daughters of the sea’ and apparently tells the story of the nine daughters of Rán and the jötunn Ægir from Norse mythology. It is an intensely poignant piece of music with beautiful melodies juxtaposed with darker, slightly harsher sections, accented by the sounds of water almost throughout.

If anything, ‘Ni Mødre av Sol’ is even better, arguably my favourite composition on the entire album. Translated as the ‘nine mothers of the sun’, this piece tells the story within Norse mythology of nine sisters who together, gave birth to the god Heimdallr. The song has an ethereal, other-worldly quality that pulls me in and, depending on my mood, brings me to the verge of tears. Selvik’s singing is heartfelt, plaintive and evocative, dovetailing with the simple but intensely beautiful central melody that begs to be played again and again. So I do. Over and over.

In closing, I have no hesitation in stating that ‘Hugsjá’ is a beautiful album, full of depth, emotion and authenticity. You can feel the conviction that both artists have towards the music on this record, meaning that you believe in the material and buy into it wholeheartedly. The combination of traditional and more modern instrumentation is well-balanced, complimenting each other perfectly. In short, ‘Hugsjá’ is nothing short of a masterpiece.