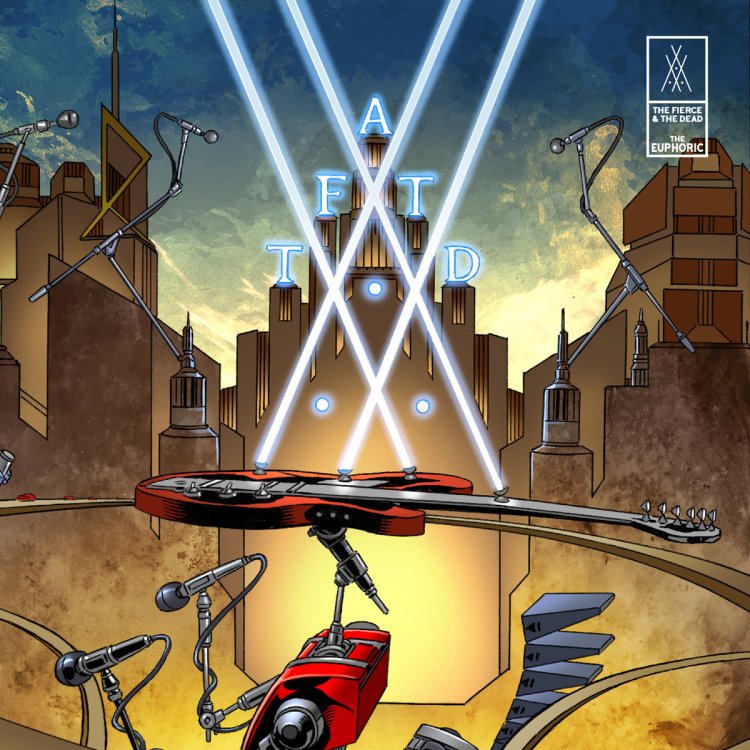 Artist: The Fierce And The Dead

I must admit that for all my exploration of progressive-leaning music, the UK’s The Fierce And The Dead have never landed squarely on my radar. Many people I have come to know and respect in the relatively small UK prog scene rave about this group but, for some reason, I’ve not joined the chorus. I’ve been aware of the band for quite some time and have even met guitarist Matt Stevens a few times at gigs around the capital. There are few more self-effacing, humble and likeable chaps in music. And so finally, having only previously dipped a tentative toe into the world of The Fierce And The Dead, I just knew it was time to dive headfirst into their music and offer my considered thoughts on ‘The Euphoric’, the quartet’s fourth full-length studio album.

The reasons why this progressive/post-rock/instrumental (call them what you will) band have not previously featured more prominently in my life become even more inexplicable when listening to ‘The Euphoric’, for it is a genuinely cracking album. As the years have gone by, I have found myself liking too many instrumental records to maintain my pretence of not favouring them. Yes, I still find myself gravitating to albums with vocals more often, but when done well, I have come to realise that I find plenty of enjoyment in instrumental affairs.

And ‘The Euphoric’ is most certainly one of these.

First and foremost, this album does not drag on; it is succinct, focused and with a running time of around 38 minutes, it is able to make an impact without losing any of its considerable punch along the way via unnecessary meandering or fripperies. Many a progressive band could learn a thing or two from these guys.

The musicianship is of an unquestionably high standard from all four corners of the band, but what I particularly like about these guys is that the music clearly comes first. As a result, the songs have an authentic feeling to them, as if this is the exact result that the band were aiming for from the beginning. Moreover, I get the feeling as I listen to ‘The Euphoric’, that Matt Stevens (guitar, synth, piano), Steve Cleaton (guitar, piano) Kev Feazey (bass, programming, synth, percussion) and Stuart Marshall (drums) don’t take things too seriously; for all the quality material on offer, there’s a levity and a certain understated humour that creeps through the material at certain points, which further heightens my personal enjoyment no end.

The album opens in powerful fashion with the appropriately-named one-two of ‘Truck’ and ‘1991’. ‘Truck’ kicks off with a huge riff and pounding rhythm that together display the power and drive of a large vehicle bearing down on the listener. Even when the song quietens down into a more sedate section, the bass is like an insistent pulse that keeps up the intensity. I love the way in which the song flits between all-out riff-heavy groove and slightly more ambient textures and I particularly like the more triumphant feel as the song draws to a strong close aided by a really lovely melody.

‘1991’ offers more of the same in a broad sense, thanks to further meaty riffs, although it takes a little more time to fully explode into life opening as it does with a more considered intro. As the name hints, the song definitely has the feel of the late 80s and early 90s to it in terms of the synth sounds and the soundscapes that are created so effortlessly. At least, that’s the impression that I get from the song – that kind of carefree attitude and breeziness that only comes from a collective that know instinctively what they want to achieve.

Just when you think you’ve got a handle on the album, along comes the title track and immediately it has a distinctly different vibe. The guitars when they arrive have a more menacing edge to them, but elsewhere ‘The Euphoric’ is a more chilled-out ambient number that introduces some intriguing synth sounds. Despite its vaguely off-key nature, the melodies are hugely memorable and the quirkiness is most definitely infectious. This is a stand-out track for me.

‘Dancing Robots’ is even more playful in tone, introducing yet more interesting tones and textures atop another incessant pulsating bass that sits at its heart. ‘Dug Town’ on the other hand is arguably one of the most immediate compositions thanks to a simple yet effective guitar-driven melody. However, I absolutely love the guitar work that appears at the 2:10 mark – I’d have loved to hear that develop for longer but all is forgiven as we are taken back to that catchy central melody to see us out.

As the album draws to a close, the material doesn’t let up in quality as evidenced by the huge and expansive ‘Verbose’. Once again, the song moves effortlessly between quieter, synth-led soundscapes to all-out riff-heavy attack and back again. The melodies ensure that the song retains a certain immediacy, but the mix of groove, ambience, heaviness and quirkiness means that this has to be the most adventurous compositions on this record.

‘48k’ might only be a couple of minutes long but it packs a punch nevertheless via a galloping riff with a prominent bassline to match. And finally, it is left to ‘Parts 7 & 8’ to bring ‘The Euphoric’ to an eloquent close. The mis-section sees everything fade away to nearly nothing, replaced by a simple recurring bass line and ambient textures that build up around the beat, joined in almost surreptitiously by the drums. The way that the tones and textures increase as the song develops towards its finale is a thing of subtle beauty, replaced unceremoniously at the death by a gargantuan riff that acts as a fitting final hefty hurrah.

It is clear from the content of ‘The Euphoric’ that The Fierce And The Dead are a very talented band. Many of you already know that and will be thinking that I should have a degree in stating the bleeding obvious. But I can only hang my head in shame that it took me this long to fully realise this. However, it is clear that ‘The Euphoric’ has opened my eyes to a band that has eluded me for far too long. Here begins a new love affair and it’s down to the excellent ‘The Euphoric’.