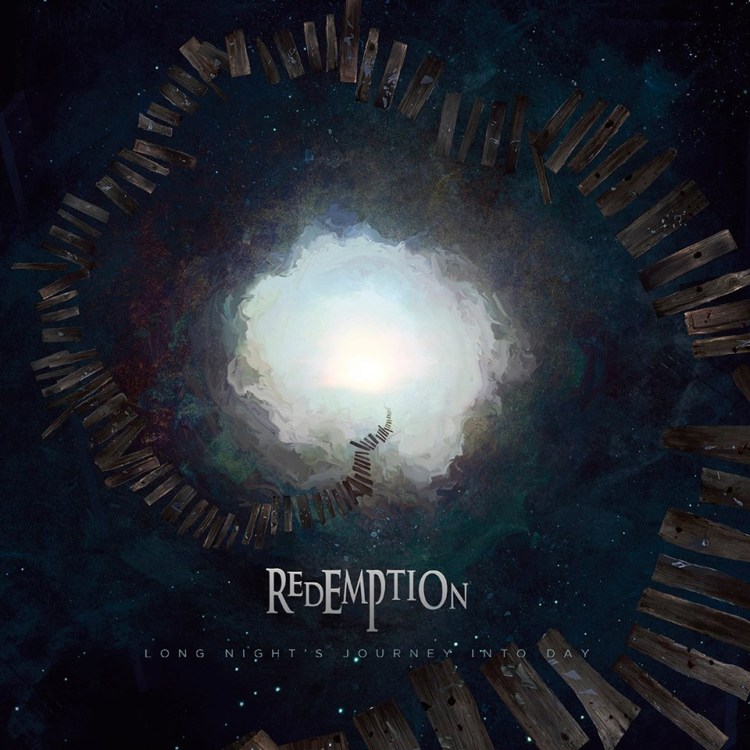 It is always a risk when a band makes a change to their line-up. The risk is only more greatly increased when the change involves one of the key members of the band. In the case of Redemption, the departing member was none other than vocalist Ray Alder, the iconic singer loved by many as the frontman of Fates Warning. Apparently, his reason for departing was because of his voice and not wanting to sing in the way he felt he needed to in Redemption.  But regardless, it left Nick van Dyk and his Redemption colleagues in a bit of a predicament. This was only enhanced by the fact that guitarist Bernie Versailles was rendered medically unfit to contribute to this album.

They say that magic can happen when faced with adversity and that’s what happened here, at least as far as I’m concerned. Having already taken on the evil of cancer and won, Nick van Dyk was unperturbed. Taking on the guitars single-handedly, he then turned to a close friend to step into the vocal void. Enter Evergrey’s Tom Englund, the guy with one of my favourite voices in metal. Have I mentioned that before?

When the announcement was made, I was stunned and just a little bit excited. I admit to being sad about Alder’s departure because he was, until now, the voice of Redemption, adding emotion and gravitas to the music surrounding him. However, I had a feeling that Englund would work in the Redemption setting. And I was right.

For long-term fans of Redemption, there was never a need to worry about the compositions themselves, as this has always been dealt with primarily by guitarist Nick van Dyk. As such, ‘Long Night’s Journey Into Day’ is instantly recognisable as Redemption, despite the new voice that now overlays the music.

Englund is not inexperienced with delivering emotional and engaging performances; just about every Evergrey album proves this. And so he does come across as the ideal replacement for someone like Ray Alder. He may be a touch grittier perhaps, but I could happily listen to Englund reading the phone book, especially the way in which he is so adept these days at adopting different personas as he sings. Ultimately, it is a different topping on the cake, but the cake remains largely the same. And it tastes equally delicious as far as I’m concerned.

Also joining the Redemption family is keyboardist extraordinaire, Vikram Shankar. This guy is as talented as they come and will no doubt be a huge boon to the band going forward. That said, the majority of the keys on ‘Long Night’s Journey Into Day’ were penned and performed by the sickeningly talented Nick van Dyk himself. So it’ll be interesting to see how Shankar interprets things in the live setting and during future releases for sure. However, right now, the prospect is tantalising, especially given his small but perfectly formed contribution here.

As much as I have enjoyed each and every release from Redemption since day one, I have to say that I always gravitate towards ‘Snowfall On Judgement Day’ when pressed to choose a favourite. And so it is really great to report that stylistically, despite all the changes, ‘Long Night’s Journey Into Day’ most closely resembles their incredible 2009 release. This is a less thrashy and certainly more varied proposition than ‘Art of Loss’, plus the melodic sensibilities have returned front and centre, meaning that very quickly, I have become hooked on this album. It is still a proper heavy metal album with the swirling and eddying crunch from Nick van Dyk’s guitars never far away, not to forget of course the punchy and uncompromising rhythm section of bassist Sean Andrews and drummer Chris Quirarte. But every track has a hook that gets stronger the more I listen, pulling me further under the Redemption spell with every spin.

‘Eyes You Dare Not Meet In Dreams’ is a thunderous opening. It is a fast, ballsy statement of intent, demonstrating that kind of typically highly-charged, intense progressive metal for which Redemption are famed. The guitar tones are wonderful, full and muscular. The tinkling keys are nicely pronounced and the powerhouse drumming is great, especially the flamboyant fills. Andrews’ bass is stylish and clearly audible within arguably the best mix of the band’s career – at times I have thought that the mix sounded a little lacking, but not here. It sounds weighty and authoritative whilst being clear, allowing every instrument room to breathe in what could have been a sonic mess in the wrong hands. Oh and you want solos? Well you’re in luck there too as Nick lets rip on more than one occasion.

‘Someone Else’s Problem’ is another killer track. It is marginally slower-paced with a dark, menacing vibe underlined by the provocative song title. There are some great, expansive moments where melody and atmospherics take a more central role, thanks largely to layers of sweeping keys. The tom-heavy fills from Quirarte are wonderful, reinforcing my love for this style of drumming over the more cybal-obsessive styles of others in heavy metal. Give me an exuberant tom-roll any day and that’s what we get here and indeed at a number of various points within the album.

The fun continues with ‘The Echo Chamber’. It’s is a stunning track, one of my favourites by Redemption, probably ever. But the that’s an accusation I can level at a few songs on this new album. I just love the variety within this particular track, the textures and the flamboyant nature of the solos which include a glorious extended synth solo that makes me smile broadly. The huge hook-laden chorus allows Englund’s superb voice to soar over a rich sonic tapestry with real panache and loads of human feeling.

‘Indulge in Colour’ dials down the intensity just a touch and features some lovely stripped back pulsating verses that then blossom into nicely melodic climes, arresting and beautiful in equal measure. According to Nick in recent interviews, it is a sequel to the song ‘Black and White World’, another justification for likening this record to the aforementioned ‘Snowfall On Judgement Day’.

Elsewhere, ‘Little Men’ reawakens the demonstrable thrash vibe from ‘Art of Loss’ via the guitar work at the core of the song. It is a bruising number that works better within this context where melodies and subtlety are higher on the agenda here than on its predecessor. It therefore acts as more of an exception than the rule, providing a nice change of pace in the process.

I’m also a huge fan of ‘New Year’s Day’, which smoulders but also offers a beacon of positivity and an upbeat vibe. Soaring leads and yet another fantastic array of melodies, not to mention more passionate singing from Tom Englund, resonant keys and pounding rhythms mean that you cannot fail to like this monster of a song.

And finally, the title track closes out ‘Long Night’s Journey Into Day’. It’s the most epic track in terms of length, but also in terms of the dynamics too. Galloping Maiden-isms are accentuated by authoritative melodies and killer rumbling bass work. I adore the atmospheres too that bathe the song in a warm embrace. It has a faint feeling of hope and positivity too, which, like one or two other songs on this record pulls me in. It flits between light and shade effortlessly, twisting and turning its way to an uplifting conclusion that gives me a warm, reassuring buzz.

Overall, after binging on this album for the last week or two, it is difficult to come to any conclusion other than this might be one of the best recordings of Redemption’s career. It’s too early to suggest that it is the best, but in truth, it offers a great deal of everything that I love about this band. Energetic and challenging riffs, bruising and complex rhythms, memorable melodies, masterful vocals and a depth to the atmospheres and lyrics that make it almost impossible not to engage with the material and commit to it wholeheartedly. ‘Long Night’s Journey Into Day’ is the full package and it is devastatingly good as a result. Full-on progressive metal doesn’t get much better than this.