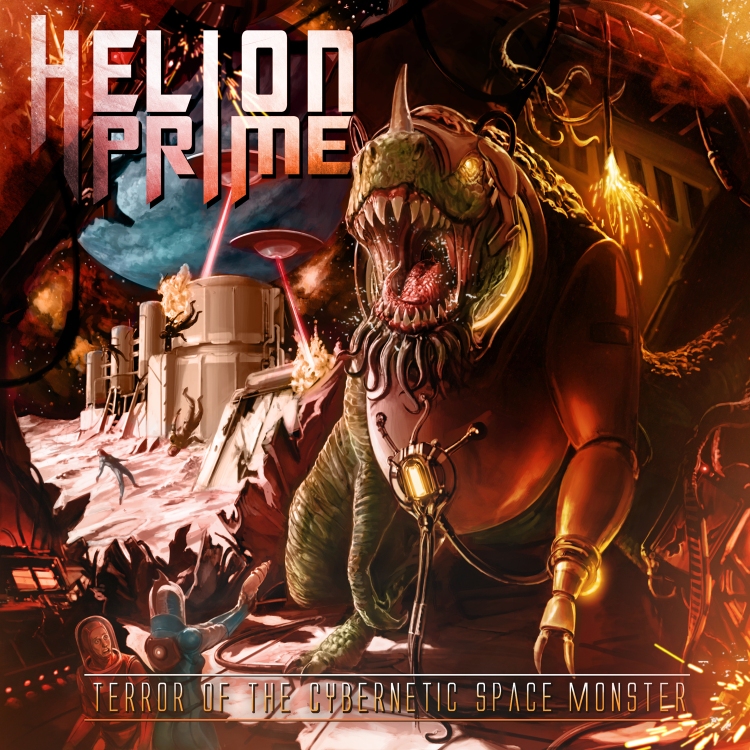 A mere two years on from their self-titled debut, Sacramento’s science-based and dinosaur-obsessed melodic power metal band Helion Prime return with their sophomore studio album, the slightly absurdly-titled ‘Terror Of The Cybernetic Space Monster’. It doesn’t really roll off the tongue does it? And as if that and naming your band after a planet featured in the film ‘The Chronicles of Riddick’ wasn’t enough, there’s the American’s mascot. Whereas Iron Maiden have Eddie, Megadeth have Vic Rattlehead and Iced Earth have Set Abominae, Helion Prime have Saibot, a Tyrannosaurus-style dinosaur dressed in armour.

I suppose if you’re going to do it, you may as well commit wholeheartedly to the cause. And with Helion Prime, there are certainly no half-measures where the fripperies are concerned.

I must admit, as much as I enjoy the silliness that some heavy metal bands dish up – Manowar, Rhapsody/Rhapsody Of Fire/LucaTurilli’s Rhapsody (delete as appropriate) and Gwar, I’m looking at you – I can’t help but think that Helion Prime are almost taking things a little too far. Prosthetics, I can defend, corpse paint I can deal with, and songs about elves in forests? Bring it on. But a dinosaur clad in space armour? I’m struggling.

The biggest problem with Helion Prime however, is that despite all their rampant eccentricities, I can’t help but enjoy their music. In fact, having lived with this record for a couple of weeks now, I can safely say that ‘Terror of the Cybernetic Space Monster’ (stifles a titter) contains some genuine ‘A Grade’ melodic power metal, the type that allows you to forget all the little flaws and draws you in to the cause in spite of your better judgement. So let’s embrace the silliness.

Helion Prime have not been without their problems either. Their debut featured the commendable vocal talents of Heather Michelle, who was replaced by Kayla Dixon soon after the debut was released. However, the vocalist merry-go-round has continued apace with Dixon now replaced by Sozos Michael, somewhat surprisingly a male vocalist given the band’s past preferences in that department.

And yet, even on this score, Helion Prime seem to have come up smelling of roses, because Michael is an admirable choice – he has an impressive set of lungs and a delivery that is both resonant and commanding. At the same time he ably demonstrates an ability to hit a fair few high notes and sing with a certain femininity in places, specifically when he sings in a quieter, more reserved fashion. Indeed, it wasn’t until a good couple of songs into my first listen to the record that I was entirely certain about the gender of Michael. And I mean this in a positive, complimentary manner, certainly not disparagingly in any shape or form. His range is impressive and he is able to cover many bases throughout this record. 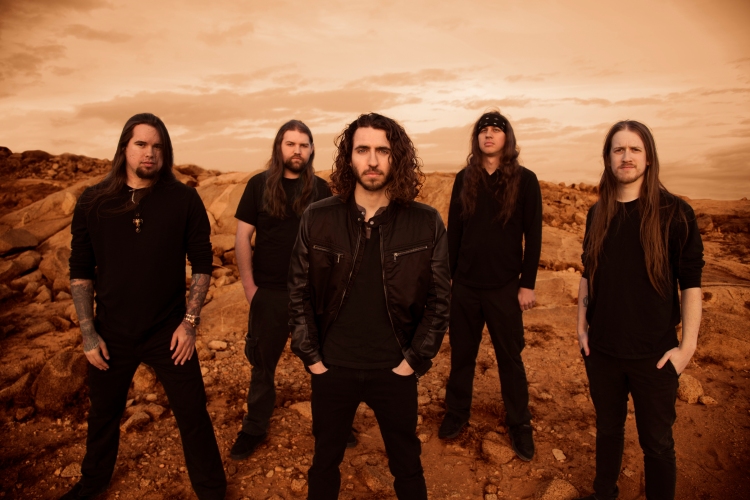 After the ubiquitous instrumental intro, ‘Terror…’ explodes into life with ‘A King Is Born’, a high-tempo, blood-and-guts, come out fighting melodic power metal track. It is thoroughly infectious in terms of the melodies that are deployed, particularly within the massive chorus, but also because of the sheer exuberant energy that courses through the song. The riffs of Jason Ashcraft and Chad Anderson are crunchy and with enough bottom end to provide some metal gravitas, whilst the drumming of Alex Bosson and bass work of Jeremy Steinhouse work in tandem to lay down a more than solid rhythmic foundation. Even the lyrics which, to paraphrase include (I’m not kidding) ‘DNA from ancient reptiles…Cretaceous overlord…the king of dinosaurs’ don’t put me off from liking this track, because the preposterous words are sung with 100% commitment and impressively by Michael. If you’re going to be silly, you may as well go the whole nine yards.

‘Bury The Sun’ is a slightly shorter, even faster number with a hint of spiky, confrontational thrash in the opening riff. And then the song opens up briefly to offer as glimpse into the future, the glorious chorus to be exact, complete with some lovely guitar harmonies. The double-pedal drumming is furious when it appears and I love the ensuing guitar solos that find themselves playing on top of a galloping, Maiden-sque beat.

For an American band, there’s a hell of a lot of European power metal worship within ‘Terror…’, too. One of the biggest examples of this being the Dragonforce-meets-Stratovarius-isms of ‘Urth’, which has a sprawling, syrup-sweet chorus with impossibly high singing overlaying an almost exclusively brisk tempo led by the double-pedal drumming of Bosson and fast-picked riffs. There’s even a stadium-friendly ‘oh-oh-ah-oh’ sing-along opportunity for good measure.

The final song on ‘Terror…’ is the title track and given the lunacy that surrounds the title of the record, the lyrical themes and everything else, it stands to reason that the album should end with a 17-minute epic composition. It’s a noble attempt at a lengthy epic but, if I’m honest, I’m not entirely sure that it warrants being quite this long. There are some great parts, such as the early vocal performance of Michael, who underlines his credentials early in the song with a passionate and powerful display. Then, as the track develops, some ear-catching and grandiose melodies are introduced and there are some cool riffs and plenty of solos that join the fray. There is even room for guest vocals including Unleash The Archers’ Brittney Hayes (AKA Brittney Slayes) . However, it does plod at times, losing impetus whilst at others, it comes across as being a little too overblown, self-indulgent and pretentious. Personally, I’d have preferred another couple of tracks like ‘A King Is Born’ or the excellent ‘Silent Skies’ which directly precedes the title track and has more urgency and focus, not to mention some of the strongest melodies on the record, killer double-pedal drumming and possibly Michael’s best singing anywhere on the album.

Overall, I really do enjoy the majority of the music on ‘Terror of The Cybernetic Space Monster’, so much so that it transcends the elements that I struggle with. Sometimes power metal should be silly and Helion Prime prove that they can be silly whilst also maintaining enough seriousness to create some high quality and thoroughly enjoyable music. I can’t think that any power metal fan won’t find something significant to like here and so this record is definitely one I recommend you check out.