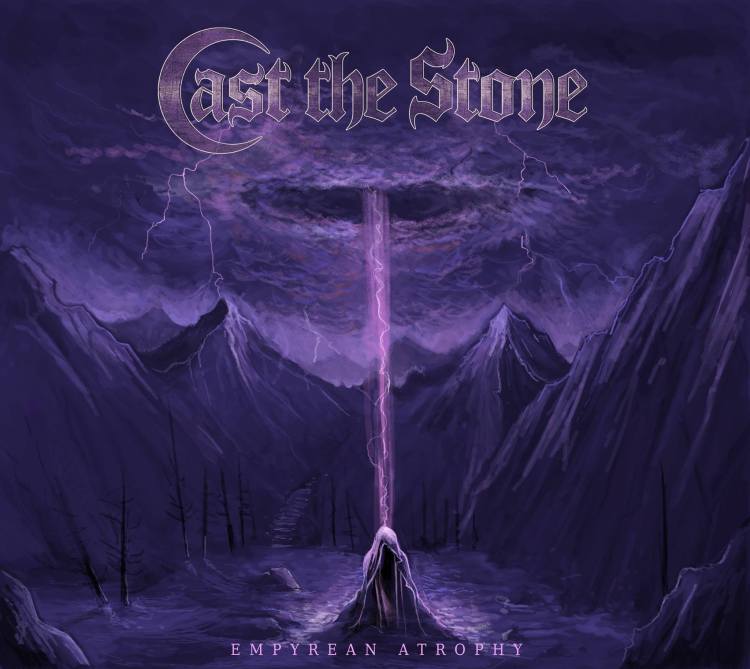 When a band features musicians that can boast connections past and present with the likes of Misery Index, Cattle Decapitation, Scour and Conflux, it is difficult to ignore. And so it has proved with Cast the Stone, a group that was formed way back in 2002 to tread their own extreme metal path. Because of other commitments that came their way over the ensuing years, the quartet have only ever released one album under the Cast The Stone banner, namely 2005’s ‘Dark Winds Descending’. But now, 13 years later, Derek Engemann (bass), Mark Kloeppel (guitars), Jesse Schobel (drums) and Andrew Huskey have returned with a new EP.

Entitled ‘Empyrean Atrophy’, this EP features five glorious new studio recordings, plus a cover of ‘Jesusatan’, originally written and performed by Dan Swanö’s Infestdead. The links to Mr Swanö don’t end there, because ‘Empyrean Atrophy’ has also been produced by the legendary Swede. As such, this EP sounds as good as you’d expect at the hands of such an accomplished musician and knob-twiddler.

For those for whom Cast the Stone is an unknown entity, the music is a little different from what you might expect given the cast of protagonists. For ‘Empyrean Atrophy’ sees the quartet blending American death metal, with the generally more organic and melodic Swedish version, whilst injecting a touch of black metal for good measure. And the resulting blackened death metal is really rather intoxicating, too. More than once when I’ve listened to this EP, I have bemoaned the fact that ‘Emyrean Atrophy’ is not a full-length because I just want to hear more.

Right from the off, the thing I like most about the final product here is that the music is both so brutal and dirty and yet it also feels warm, inviting and incredibly immediate. Even on a first listen, I was smitten before the opening track, ‘As The Dead Lie’ was complete.

Mind you, given the strength of this composition, it’s difficult not to fall for its considerable charms. It is ferocious, uncompromising and brutal but the churning riffs give the track a huge groove factor that gets my head nodding appreciatively. The effervescent bass playing is a delight, offering a breezy and playful aspect despite its primeval rumble that’s audible throughout thanks to a strong mix. The drums veer from measured and minimalist, right through to all-out blastbeat attack, via occasional subtle flamboyance. And then there are the wonderfully depraved guttural clandestine growls of Huskey who acts as the perfect accompaniment to the rich, full-bodied and powerful grunt of the guitars.

‘The Burning Horizon’ is a longer composition that really explores every facet of the Cast The Stone armoury, with excellent results. There is, dare I say it, a progressive aspect to this track as it dabbles with many different soundscapes within its running time of over seven minutes. There is a feeling of a lot more space for exploration, and the tempos frequently change from slow and deliberate, to a faster and looser approach. The black metal elements come to the fore more here, as do some foreboding and suffocating atmospheres. Again, there are sections where the groove just bowls me over, not least the closing 30 seconds or so which are a masterclass in creating  a steamrollering doom-infused extreme riff-fest, laced with incredible drumming and more superb bass playing.

Up next is a three-minute acoustic guitar solo instrumental, called ‘Standing In the Shadows’. In certain ways, it isn’t too dissimilar to the interludes that littered the first couple of Dissection records. It may not have the intensity of the extreme metal that surrounds it on both sides but it is very beautiful, well-written and demonstrates the finesse of Kloeppel’s guitar-playing, something that can all-too-often get lost within death metal of this kind.

With palettes duly cleansed and brows soothed, ‘A Plague of Light’ takes mischievous delight in hitting us hard from the off, led by driving riffs, a frantic rhythm section and more guttural vocals right from the get-go. A little surprisingly, at the 1:45 mark, the brutality takes a step back and instead, we’re treated to a highly melodic segment, complete with a soulful lead guitar solo. It might be a little incongruous in this context but I love it. And anyway, it is extremely short-lived as the blastbeats return with glee only to be punctuated by more gargantuan, lurching groove.

The title track is arguably the most consistently uncompromising song on the album but even so, the generally faster-paced track features several irresistible guitar riffs that can’t fail to get the head moving yet again. And finally, the cover of Infestdead’s ‘Jesusatan’ is a hugely competent rendition of a great song, although I can’t help but wish that Cast the Stone had given us another original track to round out this EP.

There are bound to be those out there that, like me, would have wanted to hear even more new material from Cast The Stone, especially given the 13-year wait since their debut was unleashed. However, I can only review what is put in front of me and, on that score, it is hard to criticise Cast The Stone at all – ‘Empyrean Atrophy’ is a hugely impressive EP that demonstrates a complete command of their art by these four talented musicians and songwriters. As such, this is classy but brutal blackened death metal from the pits of Hell and I love it.