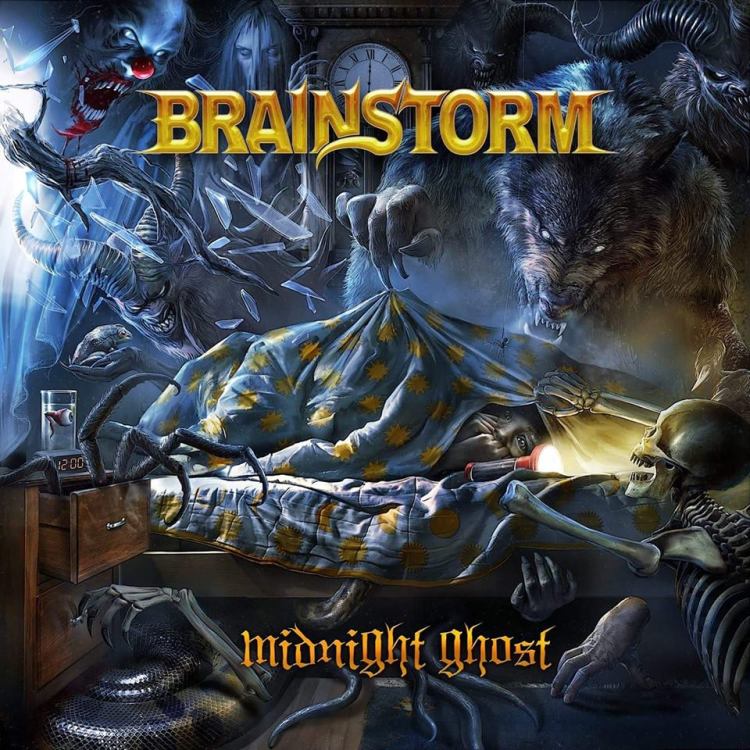 Artists often say that inspiration can strike at the most unexpected moments. Well, it appears that the same can be said for listeners of music in terms of that moment of epiphany when the song or the album they are listening to just clicks into place. For me and this album, that moment was unexpected and far from glamorous. It was during a trip around my local supermarket, as I was doing what I refer to as the ‘big’ shop. Or, in other words, the weekly grocery shop for the family.

When I’m not with the family, I have to go around the supermarket with my headphones on, as it calms and relaxes me in the face of misery, caused by retina-stripping strip lighting and a plethora of badly-driven trollies. But on this occasion, I didn’t seem to care. I was in the world of ‘Midnight Ghost’ and, as I began to realise, it was kicking my backside.

I was a little surprised by this realisation too, as Brainstorm’s last album, ‘Scary Creatures’ (2016) didn’t blow me away. It was a perfectly solid record, just not the best of their catalogue, certainly not as good as my personal favourite, ‘Soul Temptation’ that began my relationship with these Germans back in 2003. This album, on the other hand, presses my buttons, reignites the flame and pulls me firmly back under the Brainstorm spell.

The band, comprised of vocalist Andy B. Franck, drummer Dieter Bernert, guitarists Milan Lonacaric and Torsten Ihlenfeld and bassist Antonio Ieva have rarely tampered with their core sound, and once again, ‘Midnight Ghost’ is no different. The central approach remains intact, namely melodic power metal with a proper metal edge. The guitars are chunky, the rhythms powerful and it would be fair to say that there’s a demonstrable classic metal feel, as well as a nod towards the thrash subgenre. As a result, there is a whiff of the familiar about the material on this record, albeit in a positive vein as it is like welcoming back an old friend.

This time though, the friend is in extremely rude health, because the music on this record is quite literally some of the best of their increasingly lengthy career. The reason for this is that, unlike past efforts, there is barely a filler to be heard. The songwriting is honed, the performances are highly professional and almost every song has a hook or a chorus that I guarantee will get lodged in your brain. And what’s more, every time I listen, the material just gets better to the point that I could actually use the phrase ‘bona fide metal anthem’ to describe them.

The energy is infectious, the joyful exuberance oozes from every pore and the whole record is a great deal of fun to listen to. I also like the way in which there is a fair amount of variety on ‘Midnight Ghost’ where shorter, no-nonsense metal barnstormers, like the up-tempo double-pedal-led fury that’s ‘The Pyre’ rubs shoulders with the occasional longer, more epic number, such as ‘Jeanne Boulet (1764)’. The latter boasts the sounds of rain and thunder, moody acoustic guitars, tolling bells and a greater emphasis on atmosphere as well as an overt sense of the dramatic that threatens to tip into pomposity but crucially stops just short of this pitfall. Much of this has to do with the huge melodic and grandiose chorus that sits at its heart, a chorus that wipes away any potential nagging misgivings. It is dominated by the aforementioned tolling bell and Andy B. Franck’s excellent vocals, that show no signs of diminishing with age. In fact, if anything, this record sees Franck deliver some of his best performances at the head of Brainstorm.

Taking a step back and returning to the beginning of ‘Midnight Ghost’ is essential as opener ‘Devil’s Eye’ is one of the album’s many highlights. It skips along at a great pace, almost frenetic as the riffs scythe, the lead guitar wails and the drums blast incessantly. But then the pace cleverly slows to deliver a hook-laden chorus underpinned by that familiar robust and commanding guitar tone, whilst layers of synths and orchestration provide added richness. It’s a breathless and flamboyant start, setting the tone perfectly for the album as a whole as it turns out.

The intro to ‘Revealing The Darkness’ is moody and almost sombre but it is quickly replaced by a slower-paced, riff-hungry song with a greater sense of groove that delivers another superb chorus. Bigger and more expansive it might be, but it once again retains a memorable, melodic core and within a few spins, you’ll be singing along with it.

‘Divine Inner Ghost’ benefits from another excellent chorus and some satisfyingly bruising riffs, whilst the more stadium-friendly vocal Maiden-isms of ‘Four Blessings’ are a welcome addition to the album. ‘When Pain Becomes Real’ is the ubiquitous slower, almost ballad-like composition, which also flirts with more of a classic hard rock approach at times.

In short, ‘Midnight Ghost’ is a slab of genuinely high quality and insanely enjoyable melodic heavy metal, with enough emphasis on the ‘metal’ to ensure that it makes the right impact and doesn’t just fizzle into obscurity. It is an album that, thanks to a greater consistency, better songwriting and improved quality all round, ensures that Brainstorm cannot be ignored, marginalised or overlooked. In fact, I’d go as far as to say that ‘Midnight Ghost’ is easily one of the best melodic metal albums released all year.