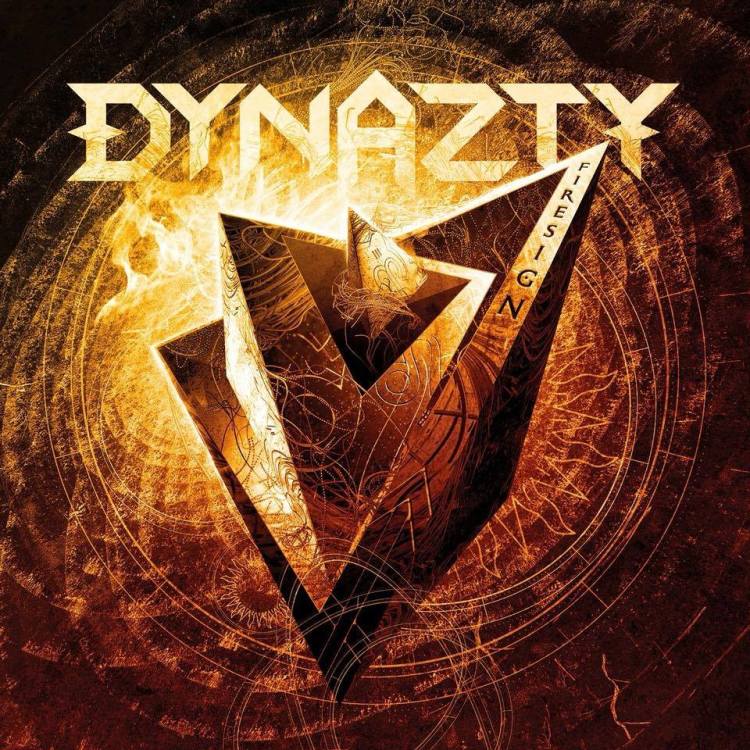 The latest band to find themselves under the Man of Much Metal microscope is Dynazty, a Swedish melodic hard rock/metal band that up until now, I’d heard of, but had never given much of a listen. If I’m honest, the reason I’m finally taking the plunge and delving into the world of Dynazty is Nils Molin, their vocalist who has garnered significantly more attention since he was recruited by Amaranthe last year as the replacement for Jake E. Had it not been for this fact, I may well have overlooked Dynazty once again. And, as I have discovered, that would have been a huge shame.

‘Firesign’ is the sixth release in Dynazty’s career that started around 2007and the band is currently comprised of vocalist Molin alongside the delightfully named Love Magnusson (guitars) and drummer George Egg as well as Mike Lavér (guitars) and Jonathan Olsson (bass).

It is hardly surprising to learn that Dynazty took part in the Swedish qualification stages of Eurovision because their output, based on the content of ‘Firesign’, it the kind of highly polished, modern melodic hard rock with a metal edge that’d find a certain favour from the Eurovision faithful. It’d be harsh in my opinion to suggest that the music is cheesy, but it is a criticism that could be levelled at the quintet. After all, this is not particularly original material and you just know where the songs are going to go within a few seconds of each kicking into life.

And yet, for all that, I’m finding myself enjoying the record rather a lot. I’ve never made a secret of my love for warm, welcoming and highly melodic rocking music – indeed, the new W.E.T. album is likely to feature highly in my end-of-year ‘best of’ list. So, I really can’t help the affection that I feel towards ‘Firesign’. It is, at its core, just a fun and enjoyable record that requires very little effort to reap the rewards.

The more I listen to ‘Firesign’, the more it occurs to me that perhaps Dynazty are the missing link between a band like Amaranthe and the melodic hard rock genre. Take the opening track, ‘Breathe With me’ as an example of what I’m trying to say. There’s a keen modern, keyboard and synth-driven edge to the track as well as some chunky and crunchy guitar riffs that draw the comparisons to more contemporary acts. And then this is coupled with a hideously catchy, AOR-like chorus with a touch of the 80s about it. It really is the best of both worlds – melodic enough to appeal to those with a love of softer music whilst ballsy enough to sate many a fan of melodic metal.

‘The Grey’ continues the theme, although it errs more on the 80s melodic rock side. The intro is a trip into the past, synth-dominated and with a sassy cheekiness. The bass-heavy opening verse is more of a minimalist affair, whilst the chorus offers sing along opportunities once again, supported by a groovy swagger that’s hard to not get caught up with.

The Nightwish similarities loom large from the outset of ‘In The Arms of A Devil’, what with the eager riff, pounding rhythm section and the symphonic overtones that drench this up-tempo track that is more power metal than anything else. The lead guitar solo is very nice indeed as well, a flamboyant ingredient that finds its way onto most of the tracks on this record, something I warmly approve of.

Other favourites include ‘Ascension’ and album of contrasts. At one point, it is a dark, stomping and brooding number, whilst at others, there’s an upbeat folk feel, full-on opulent orchestration and a chorus that delivers yet more groove and cocky swagger. Then there’s the title-track which unleashes the modern synths and pushes the contemporary influences ever further to the fore. But whatever they do, Dynazty never forget to make their output sufficiently memorable. As such, this song in particular is radio-friendly in the extreme, a facet you’ll either appreciate or deride.

If I’m going to be completely honest, I do find that the album loses a little bit of steam towards the end, with the best of what Dynazty have to offer front-loaded. This is a little bit of a shame because the first half of the record sets a high benchmark, one that could have meant that we could have been in the presence of a truly excellent record.

Nevertheless, there is a great deal about ‘Firesign’ to compliment and find favour with, meaning that it is still a very good release. I’m not certain it’ll shake the foundations of the rock/metal world, but if you’re looking or a record that features solid musicianship, tightly-honed songwriting and a clear identity, you could do a lot worse than make your acquaintance with ‘Firesign’, a very commendable melodic rock album with strong metal credentials.