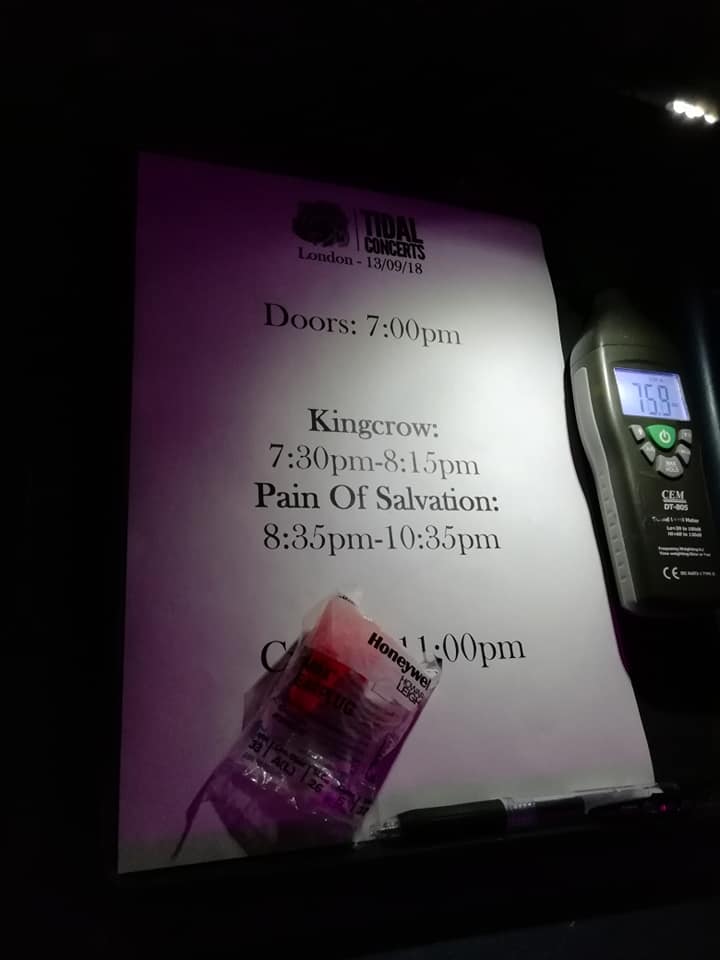 I have banged on enough about Kingcrow during 2018 on my website, but rightly so in my opinion. I had sat on the new album for literally months, so I knew how good it was. Unfortunately, it took an age for record deals to be sown up and release dates to be thrashed out. But ‘The Persistence’ was worth the wait, as I knew it would be. To date, it has received the only perfect ‘10/10’ this year, a score that is richly deserved. If you missed the review, check it out here.

I therefore just had to hear some of these songs in a live setting. Added to which, having only seen the Italians once before, at a time when I wasn’t so ardent a fan, I’d never actually met the guys in person. I had spoken to the two Diego’s (Cafolla and Marchesi) many times on-line and I’d call us friends now. But we’d never met face-to-face. This had to change.

I’ve always been a big fan of Pain of Salvation, ever since I first heard the masterpiece that is ‘Remedy Lane’ some 15 or so years ago as I was getting into prog metal in a big way. And yet, as I travelled down the well-worn path to London from the back end of nowhere, Pain of Salvation were strangely not at the forefront of my mind.

I arrived at the Assembly Rooms in Islington in plenty of time and was delighted to discover that Diego Cafolla had put my name down on the guestlist. The last time I came to this venue was a few years back to see Haken support the Von Hertzen Brothers and so I’d forgotten just what a nice, salubrious venue this was. I found myself a good spot near the mixing desk but within a few minutes, I was approached by a familiar face. ‘Are you Matt?’ asked Duncan Neil, an online acquaintance and fellow ProgPower Europe devotee with a tentative but warm smile. Confirming that his hunch was right, I was duly introduced to Duncan’s wife, Suzanne, and their friends to have a warm chat. Then, before we knew it, the lights dimmed and on to the stage walked Kingcrow, the very reason I’d made the trip to the Big Smoke on a school night.

To begin with, the sound was not great. As a result, the opening tack, ‘Right Before’ sounded muddy, indistinct and lacking clarity. However, what the mix lacked, the band made up for in energy and enthusiasm. New bassist Riccardo Nifosi made his presence known, lording it over the steadily increasing crowd by standing tall on a front-of-stage monitor, whilst diminutive guitarist and band mastermind Diego Cafolla threw a few shapes and literally jumped into the heavier section of this opening song. 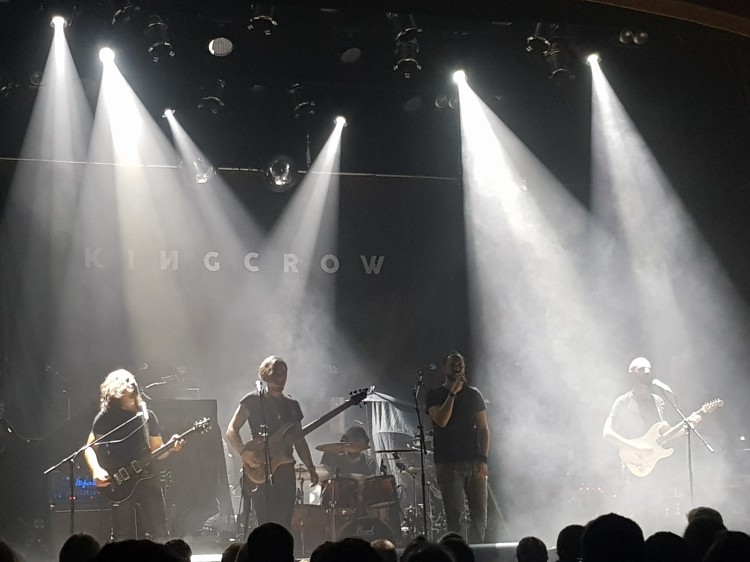 Gratifyingly, the sound guys knew what they were doing and suddenly the mix improved to the extent that it was like the clouds had parted and the sun was released to shine on the gathered throng. So, by the time ‘The Moth’, the lead track from ‘Eidos’ was aired, Kingcrow were in full swing. A bundle of energy, vocalist Diego Marchesi was clearly in his element, whooping and gesturing to the crowd to give him more. And they did, as a combination of tight, slick musicianship, passion and strong songs began to make a mark on an audience who were clearly weighted in favour of the headliners.

Speaking of strong songs though, the mid-set was dominated by a trio of new tracks off the recently-released masterpiece, ‘The Persistence’ and they transferred to the stage as well as I had hoped they would. They also underlined just how powerful these songs really are – I was carried away on a wave of euphoria as the sensational trio of ‘Night’s Descending’, ‘Father’ and the title track were given the full treatment, including the sensational solo from Cafolla within ‘Night’s Descending’, the very epitome of soul and emotion. I have told everyone who cares to listen that this new album is just about perfect and this was my vindication. 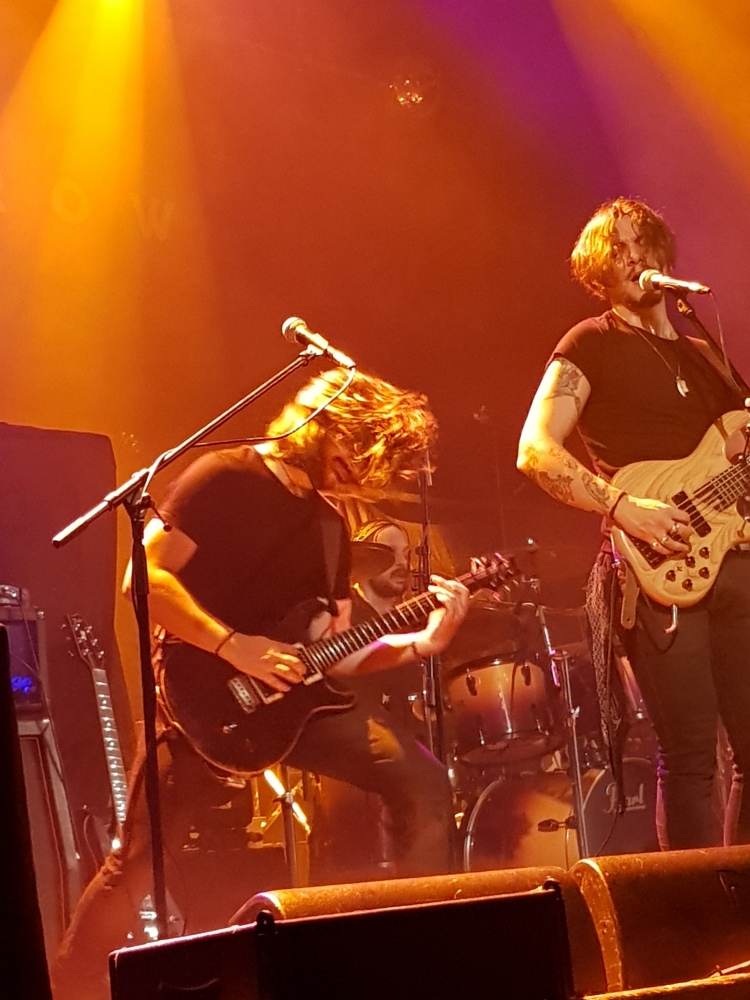 Needless to say, the 45 minutes that were afforded to Kingcrow flew by, but the set ended in dominating fashion thanks to a fantastic rendition of ‘If Only’, one of my favourites from the pre-‘The Persistence’ catalogue. The warm applause, rapturous in places, that greeted the end of their set was testament to the quality performance that Kingcrow delivered tonight, and I’m willing to bet that they made many new friends off the back of this show.

Kingcrow Setlist: Right Before, At The Same Pace, The Moth, Night’s Descending, Father, The Persistence, If Only

Such was my tunnel vision towards Kingcrow, that I almost, almost forgot that there was another band playing this evening. The last time that I saw Pain Of Salvation on stage, it was at the Underworld in support of their album, ‘Be’ back in 2004. My overriding feeling was one of disappointment that night as I was left unimpressed by a stop-start performance that lacked a certain conviction and felt strongly of style over substance.

Naturally, I hoped for better tonight and blow me down with a feather, I was rewarded handsomely. Much has gone on in the Swede’s camp of late, most notably the apparently acrimonious departure of guitarist and backing vocalist Ragnar Solberg soon after the release of the sensational ‘In The Passing Light of Day’. Back into the fold had come Johan Hallberg to join the irrepressible guitarist/vocalist Daniel Gildenlöw, bassist Gustaf Hielm, drummer Léo Margarit and keyboardist Daniel ‘D2’ Karlsson. Together, there seemed to be a genuine camaraderie on stage and it transferred positively to the music that assaulted our ears during a near two-hour set. 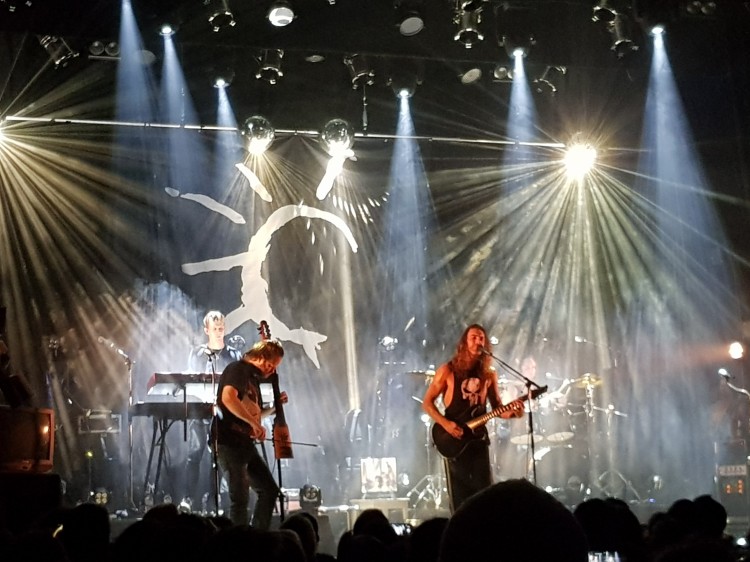 The show began with ‘On A Tuesday’, the opening track from ‘In the Passing Light of Day’ and immediately, I was blown away by the energy, the power and the sheer heaviness of the material. It is easy to forget sometimes just how heavy Pain of Salvation’s music is, but there was no missing this tonight. The guitars were simply huge, the snap and thump of Margarit’s drums was immense and Hielm’s bass rumbled authoritatively as Gildenlow strode around the stage like the consummate pro, singing beautifully and looking a picture of very rude health – damn him! A beautiful song in its own right, it was made even more spectacular by the spotlight falling on Margarit, who delivered the higher-pitched, more feminine vocals beautifully.

The heaviness of the material was further underlined by the monstrous, off-kilter and properly progressive ‘Reasons’ that had the audience swaying and headbanging furiously. And then, as a furious rendition of the catchy anthem, ‘Meaningless’ echoed around the venue, I was left thinking ‘Ragnar who?’ as Hielm, Margarit and the bare-chested Hallberg all assisted with the singing to great effect. This song felt like a true force of nature and the crowd went berserk at its conclusion.

I love ‘Remedy Lane’ and despite the band not airing any tracks from this album, I had very few complaints with the chosen setlist. I’m not a big fan of ‘Disco Queen’ but it was a lot of fun in the live arena, complimented by bright, multicoloured lights and flashing hats in the mixing booth. And, when all is said and done, it is hard to argue with a set that included two songs from ‘One Hour By The Concrete Lake’ as well as the massive ‘Ashes’, ‘Used’ and ‘King of Loss’ from ‘The Perfect Element Part I’. ‘Rope Ends’ would have been great to hear, but that’s just me. 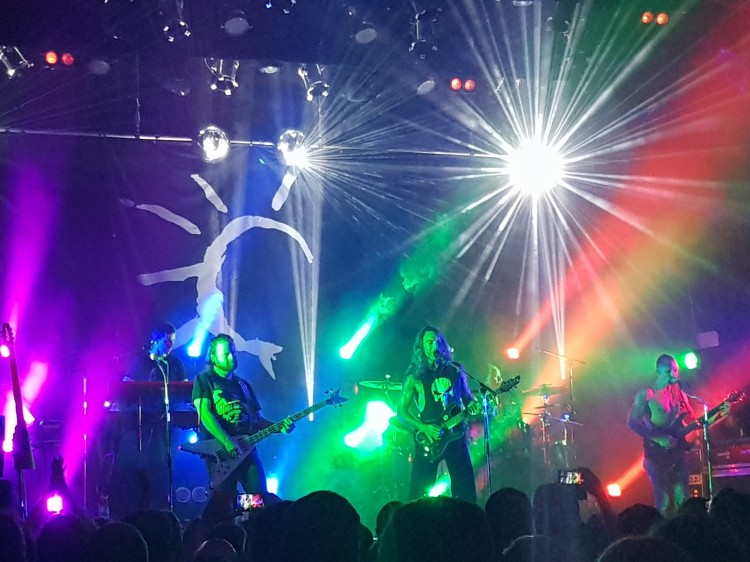 However, the icing on the cake was the final hurrah, a full and unabridged rendition of the title track from ‘In The Passing Light of Day’. It is an exquisite and epic song but on stage, I was simply not prepared for the full force of emotions that it raised within me. Daniel has made no secret of the fact that the song was written for him and his wife and he looked physically moved as the song came to a glorious end. Mind you, he wasn’t the only one, as I fought back tears at the death.

Tonight, Pain of Salvation were every bit as good as they weren’t when I last saw them a decade or so ago. This was a supreme display of technical and melodic heavy progressive metal that, when delivered in this manner, sounds as vital and special as it did when it was first written. I feel embarrassed that I ever doubted them and for that, I apologise. Tonight was the moment, I realised just how much Pain of Salvation means to me.

The evening was then made perfect by finally meeting the guys from Kingcrow in the flesh. After all this time, it was well worth it. Warm hugs all round, selfies and laughter ensued before I was unceremoniously ejected from the venue by the usual over-zealous and humourless security, forced to find my way home to the back-end of nowhere. It was totally worth it though!

Pain of Salvation setlist: On A Tuesday, Reasons, Meaningless, Falling, The Perfect Element, Disco Queen, King of Loss, Ashes, Handful of Nothing, Pilgrim, Inside Out, Full Throttle Tribe. Encore: Used, In The Passing Light Of Day