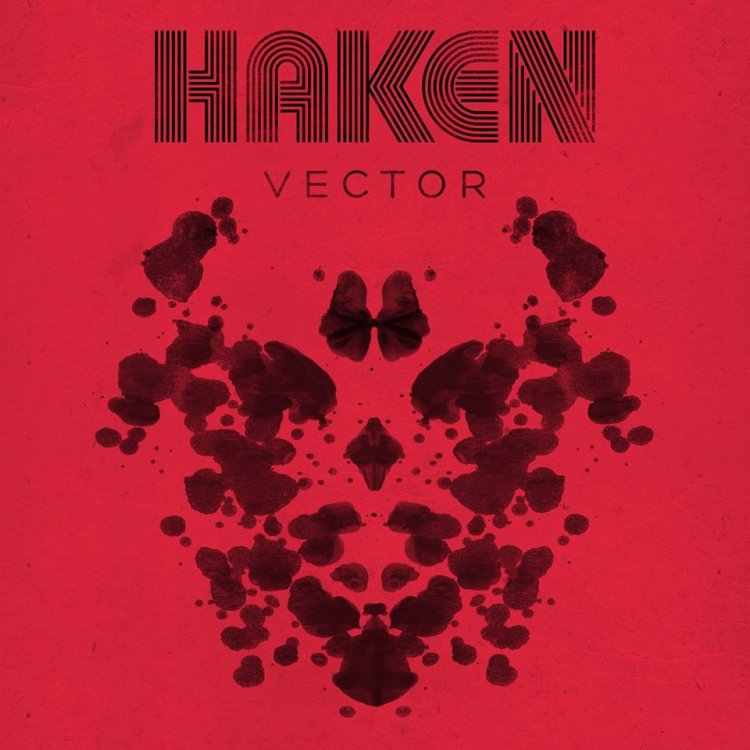 Just to prove that I am not a completely blinkered and biased Haken fanboy, I am going to start the review of their latest record with something other than immediate, unfiltered hyperbole and gushing praise. That may or may not come later. But for now, I want to address the one aspect of album number five, ‘Vector’, about which I have reservations.

Simply put, I wish there were more than just seven songs, particularly when one of the seven is a sub-two-minute intro piece. I have calculated the overall running time of ‘Vector’ and fully accept that 45 minutes is not bad by any means. And I fully appreciate that some albums within different genres will contain eleven or twelve songs but still fall shy of this overall length. So I don’t want people to think that we’re being short-changed here.

‘And’, I hear some of you cry, ‘their debut, ‘Aquarius’ only had seven songs’. Correct, but those seven songs lasted over 70 minutes. ‘Well, then Haken have clearly learned the art of editing their music and are now more succinct’, I hear a few more of you cry. Again, I agree with this comment, although I challenge anyone to suggest that their debut wasn’t a special disc, regardless of its length. The fact remains that ‘Vector’ is by far and away their shortest ever full-length and my reservation around this all boils down to this simple point:

‘Vector’ is just so flipping great that I want more music, damnit. Call me greedy, selfish, or whatever you will, but without any individual track on this record extending beyond 12 minutes, I am hankering for a little bit more. I’m sure many of you will heartily disagree with my opening comments but for those of you who have stuck with me this far, allow me to ditch the misgivings and get all positive on you.

To start with, the apparently straight-forward album cover is actually fascinating in that it is inspired by the Rorschach Test, a psychological test in which subjects are analysed by what they see in a pattern formed by inkblots.

The cover reveals a little something about the lyrical themes that permeate ‘Vector’, in that the album delves deep into the minds of the Haken protagonists but also fictitious characters, first introduced within ‘The Good Doctor’. From this point onwards, the songs set out to explore the psyche of humans with interesting results. Naturally I have simplified things dramatically, but you get the point.

As intriguing as the lyrical concepts are, it is the music that will ultimately determine whether ‘Vector’ is a hit with me or not. On that score, ‘Vector’ is an amazing album. It is, for me, the most immediate of all their offerings to date and I have very quickly taken it to my heart. The immediacy for me, is down to some of the strongest melodies that Haken have ever penned. But these melodies are not at the expense of other elements because Haken are still the mischievous little scamps that they’ve always been, testing the open-mindedness of the listener, pushing at the boundaries of what may or may not be acceptable and generally playing with different ideas. And believe me, these guys pack a lot into this record.

A lot has been made in the lead-up to this release that ‘Vector’ would see Haken taking a heavier path. That is certainly true, as some of the material is downright monstrous, featuring gigantic riffs, bruising bass and thumping drums. Being the Man of Much Metal, I find this increased heaviness to be very welcome indeed and I personally hope that this element remains within future releases.

However, what I also hear on ‘Vector’ is an understated and clever homage to every single previous incarnation of the band within the music. I’ll go into more detail about the tracks shortly, but suffice to say that I can hear nods to ‘Affinity’ within ‘The Good Doctor’, ‘The Mountain’ is echoed at points within ‘Puzzle Box’, ‘Aquarius’ is referenced within ‘Veil’ and ‘Host’ calls to mind ‘Visions’ in places. Accidental? I can’t say for sure but the Haken lads are wily creatures and so I’d not put it past them.

So, to complete the scene-setting, we have in ‘Vector’ a shorter, heavier, complex, and, to my mind, a more immediate record. Sound good? Well then let me now delve into the tracks themselves in more detail and put some flesh on the bones for you all.

First up is ‘Clear’, an instrumental introductory piece that sets the scene straight away. The first sound that emanates from the speakers is a bold one, slightly intimidating on first listen. It says ‘Haken mean business’. It develops into a rousing cinematic piece with the organ sound giving the whole thing a euphoric, vaguely ecclesiastic feel. I’m generally a naysayer to short introductory pieces, but this one is actually pretty decent, setting the album up nicely.

Almost seamlessly and without any pause for breath, the intro is replaced by ‘The Good Doctor’, the first single released a week or two back. Those electronic drums and strong echoes of the 80s, embraced on its predecessor ‘Affinity’ make a brief appearance early on, and then occasionally at other points throughout. What I hear is a rather immediate, up-tempo, breathless, full-on track that explores ‘One Flew Over The Cuckoo’s Nest’ lyrical themes, thoroughly in keeping with the overall loose album concept. There is usually one song on every Haken album that’s a little bit ‘out there’ (‘Cockroach King’ or ‘1985’ anyone?) and this is most certainly the one on ‘Vector’.

Next up, we are hit with ‘Puzzle Box’, a song that has grown and grown on me to the point where I absolutely love it. It starts boldly before falling away to be replaced by just the rumbling bass of Conner Green, synths of Diego Tejeida and Jennings’ smooth voice. The explosion that occurs next is pronounced and forceful, delivering the song’s chorus of sorts which is ridiculously catchy once it works its magic. From there, the song dives off into other realms including typically flamboyant instrumental workouts and an electronic-led quieter passage, full of cinematic intent and atmosphere. And, when joined by Jennings’ distinctive effect-laden vocals, highly reminiscent of material heard on ‘The Mountain’. Another explosion of sound occurs in stark contrast and then, to close, the chorus is reprised albeit in a more euphoric vein, supported by some unforgiving heavy guitars.

‘Veil’ is the album’s longest track, weighing in at twelve-and-a-half minutes. The sedate opening is dominated by piano and harmony vocals from all corners of the band, leading me to hear echoes of both Queen and Shadow Gallery. The serenity is short-lived because it’s not long until we’re hit by some of the very heaviest riffs that Haken have ever committed to record. Again, there’s a wonderful command of light and shade as the chunky, menacing riffs are broken up by quieter, more introspective moments along the way. The effervescence that shines through this track, as well as some of the more ‘out there’ sounds conjured by Tejeida, such as the random, discordant jazzy moment that pops up out of nowhere remind me of the quirkiness of ‘Aquarius’. But the similarities are only fleeting, as ‘Veil’ definitely represents Haken v.2018. The guitar work within this track is simply brilliant too, with both Richard Henshall and Charlie Griffiths producing some of their best work in terms of variation, technicality and feel, the latter demonstrated within the occasional lead breaks that appear out of the maelstrom of sound. A personal highlight can be heard at the 9:55 mark, where ‘current’ drummer Ray Hearne belts out some seriously thunderous rolls and fills to accent the increased heaviness. And as with previous songs, this beast is pulled together artfully by some memorable melodic sensibility which once again sees the song to a rousing finale that features a killer riff, arguably my absolute favourite on ‘Vector’.

More bold electronics open ‘Nil By Mouth’ a near-seven-minute instrumental workout that, before long, delivers more excellent riffs that crush most things in their path, either in lurching, stomping fashion or with a Meshuggah-like swagger. The energy within this track is the most arresting aspect of it, as it never sits still, always on the move looking for new ways to entertain and challenge the listener, be it through all-out attack or something more reserved. If you ever doubted the technical prowess of this sextet, ‘Nil By Mouth’ is the wet kipper around the face to rid you of those ludicrous thoughts.

I’m a huge fan of the song ‘Deathless’ from ‘Visions’. In fact, it is easily one of my top five favourite Haken songs ever. And, whilst ‘Host’ is stylistically a long way from ‘Deathless’, I do get the same kind of feels and emotional gratification from it. The song begins with the sound of my most hated instrument in the world – the trumpet. However, after recovering from my early shock, I must concede that the mournful sound of the lone brass instrument perfectly compliments the solemn tone and atmosphere that engulfs the early stages of the song. Jennings delivers a very quiet and understated vocal performance, full of subtly and emotion. And then, at around the mid-way point, the track changes and provides the most beautiful melodies heard anywhere on ‘Vector’, possibly of any Haken track ever. It is just so beautiful, I’m almost immediately hooked. And the goosebumps and chills are real, people, very real indeed.

Touring with Norway’s prog darlings Leprous has clearly rubbed off on Haken because I hear a few similarities on the closing track, ‘A Cell Divides’, namely the stop start nature of the instrumentation and the accompanying vocal delivery. The synths are very powerful and striking within this slightly more orchestral, yet moody and dark-tinged track. And the closing finale is suitably rousing, topped off by a great final note from Jennings.

Once again, as far as I’m concerned, Haken have proved that they are sitting pretty at the top of the progressive music tree, able to look down and survey the kingdom below. As ever, their output here on ‘Vector’ is interesting, challenging, fun, and hugely rewarding. It also has a greater immediacy which I really like, despite the definite metallic trappings throughout. It is just a pity that we weren’t given one more song, because then, this would have been a sure-fire 10/10. As it is, I have to stick to my guns and alter the final score accordingly. Nevertheless, what we get cannot be argued with, as it’s sensationally good.