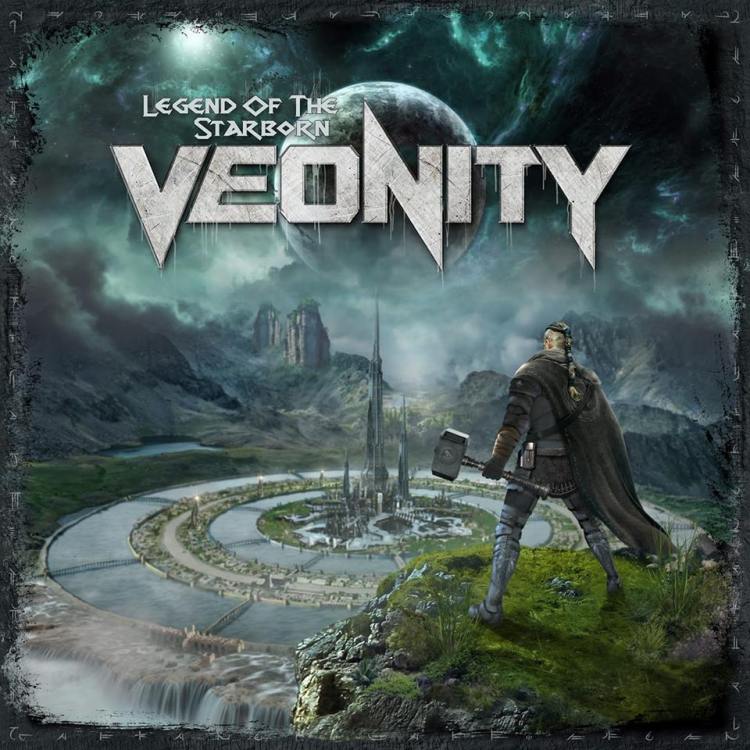 Album Title: Legend of the Starborn

Power metal is one of those subgenres within heavy metal that can encompass a lot of different styles. At one end, there’s the self-styled ‘cinematic Hollywood power metal’ of Luca Turilli and Rhapsody in all its various splintered forms. At the other, you have bands like Iced Earth that seek to blend power metal with thrash and classic heavy metal to make it a bit heavier and darker. In between, there are a multitude of bands, from ‘happy’ Helloween to breezy Sonata Arctica, Stratovarius to Blind Guardian.

At the core of power metal though, is melody, predominantly through the use of catchy, hook-laden choruses. There is also a sense of fun and light-heartedness that runs through much of the power metal world. Some bands even veer into ‘silliness’ territory, either through accident or design. The same can be said of ‘cheesiness’, either lyrically or musically. Again, the cheese can be created by accident or by design.

Either way, I enjoy a good dose of power metal when my mood dictates, with the original Rhapsody, Helloween and the seemingly defunct Lost Horizon featuring towards the top of my list. However, these days, I am much more discerning than ever before, especially where power metal is concerned. Over the years, my internal quality control sensor has become a little more sensitive and the music has to be of the highest quality for me to listen. Otherwise, I must be honest and admit that I tend to get a little bored.

But when the name Veonity, a new name to me, was uttered in hushed corners of the World Wide Web, I felt it only right and proper to investigate further to see if this was a band that I could get on board with.

After spending what seems like weeks listening to it, I have to say that ‘Legend Of The Starborn’ is arguably the best power metal record that I have heard for some time. Certainly throughout 2018, probably longer. It makes me wonder then why I’d never heard of this band before? Were their previous two full-lengths, 2015’s ‘Gladiator’s Tale’ and 2016’s ‘Into The Void’ total toot? I don’t know, but I shall be exploring and finding out just as soon as time allows. For now though, my attention must centre on album number three, the perfectly power metal-monikered ‘Legend Of The Starborn’.

As you may have guessed, the Swedish quartet comprised of bassist Kristoffer Lidre, drummer Joel Kollberg, guitarist Samuel Lundström and guitarist/vocalist Anders Sköld, bring a sci-fi concept to life, one that began on their previous album, ‘Into The Void’. At this point, I’ll leave the band to explain the story:

“A sequel to Into The Void. Arriving in the age of Vikings, the Hero discovers that the technical progress that killed the Earth started when the Vikings vanished. An alien race called Atlantis came to Earth with inventions and technology, but began to enslave mankind. The Hero leads the last remaining Vikings on a quest to save humanity.”

As preposterous as it sounds, the story actually helps to create that extra layer of drama and theatricality that this kind of music needs; it somehow had to be a concept disk with a convoluted and far-fetched story to make this album work as well as it does.

Musically, Veonity have managed to take some of the best bits from a number of the power metal elite and pull it all together in a way that sounds invigorating and, whilst not entirely original and unique, it is at least fresh and enticing, full of energy, verve and with a lively sparkle too.

Within the thirteen compositions, you’ll hear echoes of Rhapsody, Stratovarius, Helloween and Gamma Ray just to name a few, although Veonity do have an identity of their own. You will hear varying tempos from authoritative mid-tempo stomping, to all-out double-pedal insanity and quite a few galloping rhythms for good measure. Importantly for a metal album, we also hear strong riffs and tons of lead guitar histrionics often neo-classical in delivery. In addition, almost every single song features an epic, anthemic chorus that, given a few spins, will get lodged in your head and have you grinning like a loon and thrusting your fist to the skies. The final ingredient is the voice of Anders Sköld, which is simply incredible and which takes the music to another level. The sheer range of the guy is insane, from soft and quiet, via a rich, resonant and effortless mid-range right through to trouser-splitting high notes that would push the likes of Tim ‘Ripper’ Owens to the limit.

I’ll be honest and say that I’m finding it quite difficult to pick just a handful of songs to single out for praise, as just about every one is worthy of being dissected in detail. But do so I must and so I’d draw your attention to ‘Warrior of the North’, which channels the grandiose symphonics of classic Rhapsody but which also deviates for a period to offer something elegant and epic, more akin to that which you might have heard on a Lost Horizon disc.

Then there’s the criminally catchy and cheeky guitar-led melody that opens up ‘Gates Of Hell’ which is then reprised within the composition. It’s one of those hooks that makes you sit up and take notice and no matter how many times I listen, it always makes me smile and simply feel better about life. The chorus isn’t bad either, and then there’s the vaguely AOR-like segment that s inserted so smoothly which I really like.

Elsewhere, the muscular ‘Freedom Kings’ offers some of the most ferocious and heavy material on the record whilst never losing sight of their melodic intentions. Meanwhile, the opening track, ‘Rise Again’, is a suitably bombastic blood and thunder affair that wastes no time in laying down a monstrous Viking gauntlet. The pace is breathless and relentless and the chorus acts as a battle-hungry call to arms, the kind that bands like Sabaton would love to have written. There’s just enough cheesiness too, thanks to lyrics in a momentary bass-led lull, that declare: ‘Vikings raise your banners high, swords and axes to the sky, flames of glory light the night, Vikings we will win this fight’. Anders Sköld’s wails then cut through the song like a knife through butter, as do some glorious and expansive neo-classical lead guitar runs to top things off.

‘Guiding Light’ sets off at the speed of light with an incredible urgency and then delivers one of the most infectious and anthemic choruses on ‘Legend…’. ‘Outcasts of Eden’ by contrast slows the pace a little but injects lead guitar lines that are vibrant and catchy, not to mention yet another chorus that begs to be sung along to.

If I had anything even approaching a negative, it would be that 13 tracks might be just one or two too many. But to be honest, that’s just me being picky for the sake of it, because there is very little that is deserving of criticism here. Veonity have been around for five years or so but in 2018, with ‘Legend of the Starborn’, they have well and truly announced their arrival into the upper echelons of the power metal elite. If only all power metal was this good!