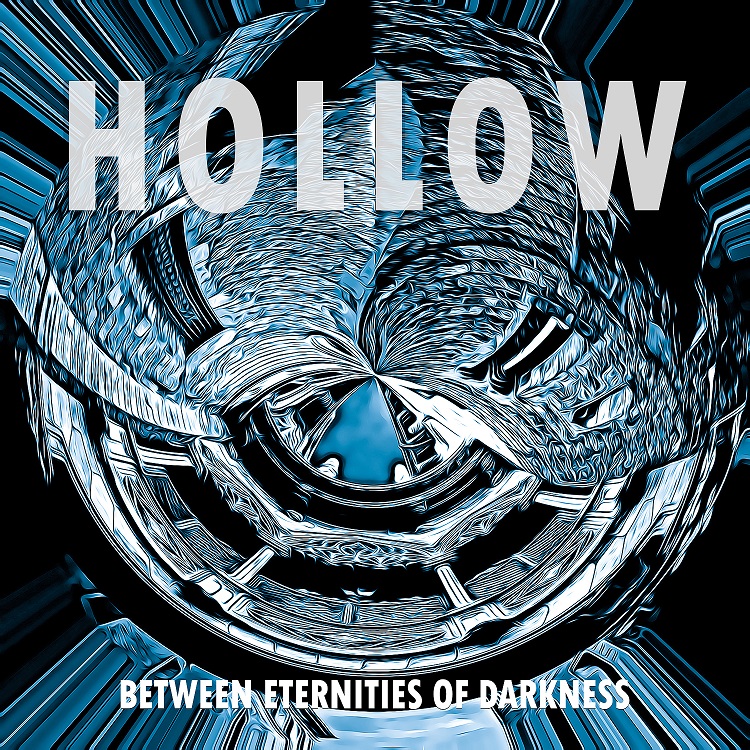 Album Title: Between Eternities of Darkness

I had cause the other week to rehouse a few of my ever-expanding CDs and in so doing, I cast my eyes upon an album called ‘Architect of the Mind’, a little-known album released via Nuclear Blast Records in 1999. It was recorded by a Swedish band called Hollow and I remember discovering it in a second-hand record shop a few years after its release. I’ll admit I knew nothing about Hollow at the time and decided to buy it based on the record label alone because I was aware by that time of the pedigree of the Nuclear Blast label.

If I’m honest, it never got particularly regular rotation, although I liked several of the songs on the album. The progressive-leaning power metal was nicely written and executed, but the production and generally higher-pitched vocal delivery meant that it felt quite harsh to listen to. But nevertheless, I liked it enough to casually wonder to myself whatever happened to the band. After ‘Architect of the Mind’ the Swedes seemed to disappear off the face of the planet.

As fate and happenstance would have it, just a couple of days later, I get a message in my inbox from Andreas Stoltz, an original founding member of Hollow, proudly declaring that Hollow were back and releasing their first album in two decades. The world moves in mysterious ways, I can tell you.

Naturally, I agreed to take a listen and, after several more spins, I’m in a position to offer my thoughts on ‘Between Eternities of Darkness’, effectively the solo work of vocalist and guitarist Andreas Stoltz, with Stalder Zantos on the drums and a few others offering brief guest appearances elsewhere. In keeping with ‘Architect…’, this new album is a concept piece, about a mother who moves home to try to protect her adolescent son. According to Stoltz, the best-placed intentions don’t work out and the woman’s son is led down the wrong path by a new set of friends. The story plays out over ten tracks, during a 45-minute running time. As concepts go, it is refreshingly brief and certainly not overblown and exhausting.

In some ways, it doesn’t seem possible that it has been nearly 20 years since Hollow’s last outing because Stoltz’s voice is almost instantly recognisable. It has retained that higher-pitched delivery from the previous albums and contains that sense of passion that was always present. Stoltz’s voice definitely remains an acquired taste I find but it’s a taste I am really beginning to acquire. And he does a fine job in trying to tell the story with as much strength and commitment as possible, which I find very laudable indeed.

Strangely, those same misgivings that I had with ‘Achitect…’ remain more or less present here too. Once again, if I’m being brutally honest, the combination of Stoltz’s vocals and the production lend the music a slightly harsh edge. It’s almost like things are too clear and too trebly perhaps, thereby lacking an organic quality.

However, in spite of this, you’d have to be a fool not to realise that there are some strong elements to ‘Between Eternities of Darkness’. The overall approach is still very much rooted in the classic metal/power metal-meets-prog intersection, meaning that the music is likely to find some favour with those who enjoy bands such as Queensryche and Crimson Glory to name just two. Indeed, these are reference points that Stoltz himself makes.

Despite the dark overtones to the subject matter, much of the music is catchy and memorable, and there’s an undeniably great energy to the material. It feels sufficiently dramatic too, an important aspect of a concept album in my opinion. Plus, as I’m finding, the more I listen, the more I’m enjoying the record. Each spin sees an increase in the score that I am likely to bestow. That’s got to be a positive, right?

‘Travel Far’ is a muscular, riff-driven affair with hints of thrash, that benefits from an urgent tempo for the most part. It also injects an understated progressive element in terms of its construction, use of light and shade and the way in which the chorus is jarring at first but which gets to you eventually in an insidious manner.

Then there are songs like ‘Fate of the Jester’, which dial up the drama by moving quickly between heavy early Queensryche territory, to darker, quieter moments, all the while keeping the listener invested by pulling out some effective hooks and melodies.

Elsewhere, ‘Pull of the Undertow’ gallops with vim and vigour, carrying you along for the ride very willingly, whilst delivering a really strong chorus that shows Stoltz at his best vocally and which features a nice lead guitar line to accent the galloping rhythms. ‘Hidden’ is another strong song that offers some exuberant guitar leads on top of further appealing riffs to make it stand out positively. Indeed, ‘Calling’ keeps me entertained too, blending more light and shade and then proffering a cheeky-sounding chorus.

The ballad-like ‘Shadow World’ has to be my favourite track of all here because it is both sensitive and powerful, the perfect combination. The acoustic guitars are a welcome addition, especially within the quiet introduction, but the way in which the song then explodes directly into the melodic chorus is excellent. Actually, maybe this is the song that best showcases Stoltz’s voice after all, moving from subtle and quiet to bold and passionate very smoothly.

I’m genuinely delighted that Andreas Stoltz and Hollow are back with new material. Sometimes resurrections after such a long hiatus can be a mistake but in this case, it is a success. ‘Between Eternities of Darkness’ is certainly good enough to turn heads and remind fans of this kind of metal why they are fans in the first place. I sincerely hope that Hollow stick around this time and I shall look forward to more new music sooner rather than later…I hope!