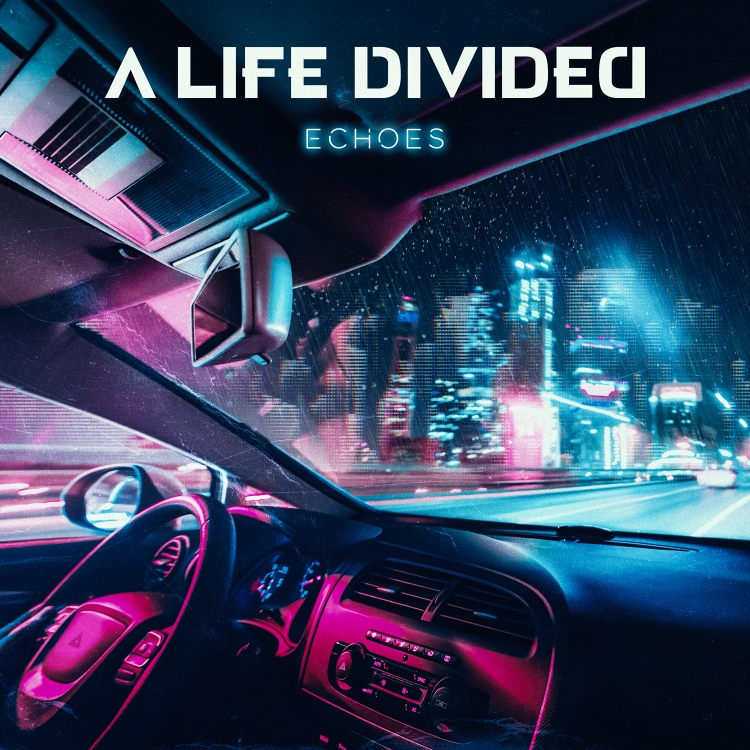 This is one of those albums that I discovered during the Christmas holidays as I went through my email inbox to do some much-needed sorting and deleting, whilst being on the lookout for good music that needed reviewing. I will admit that I had never heard of A Life Divided before and, after taking a look at the album cover, I was close to dismissing it. However, I am also aware that AFM do, by and large, know what they are doing, so on the strength of this, I took a listen. And now, here I am reviewing the record.

It is a strange one really, because this is definitely not my normal fare. Listening to ‘Echoes’ is like listening to the bastard offspring created during a clandestine dalliance between modern alternative rock, 80s New Wave, electro and metal. To put it a little more clearly, in their bio, they list influences such as Depeche Mode, Devin Townsend, Static X, Nine Inch Nails and Bon Jovi. An eclectic mix I’m sure you’ll agree, but all these influences do play a part on this album to a greater or lesser extent.

Crucially though, the final product is surprisingly palatable, right from the off. I pressed the play button and cowered, wondering what I might hear and was shocked that I immediately liked what I heard.

‘Hello Emptiness’ kicks things off in a genuinely dark and vaguely Gothic fashion, assisted by some stark lyrics. One minute it is quiet with subtle electronic sounds flirting at the edge of your consciousness, the next the track explodes into the chorus with some chunky guitars and a melody that I absolutely adore. It’s a great start but I’m still worried that my higher expectations might be dashed as the album develops.

Happily, the great music continues with ‘Dry Your Eyes’ and it is here that the past comes face-to-face with the modern world. The beat, atmosphere and electronic drum effects are straight out of my birth decade, but the guitars that emerge as well as some of the other electronic embellishments bring the song bang up-to-date. It is both nostalgic and relevant, an impressive accomplishment from this Munich-based band.

The aptly-monikered ‘Addicted’ is indeed a song to which I have become strangely addicted. It is a bright and breezy pop-cum-melodic rock track with a strong chorus and radio-friendly appeal. And it plants a giant smile on my face whilst bringing me dangerously close to moving in a dance-like fashion around the Mansion of Much Metal.

By this point, the tone has been set and the dye has been cast. If you’ve not liked the sound of ‘Echoes’ so far, it is time to move on because the thirteen tracks that make up this record broadly follow the same pattern; lashings of 80s sentimentality, catchy choruses and strong atmospherics, all wrapped up in modern packaging courtesy of the crisp production and chunky guitar tone.

If I have one criticism over this record is that it is a touch too long; a couple of tracks could have been shaved off the total but, on the other hand, it isn’t easy to decide which two should receive the chop, such is the consistency. Maybe the final track on reflection as it doesn’t grab me like others do.

But speaking of grabbing me, the heavier, Devin Townsend influences emerge within the brooding and anthemic ‘Far’, which means that this has become a favourite of late. Things get even more abrasive on the follow-up, ‘Anybody Out There’ which blends the immediacy of 80s rock with heavy riffs and the odd growled vocal, calling to mind a slightly more retro Amaranthe in the process. ‘The Ordinary’ is anything but ordinary, as it soars with a wonderfully melodic chorus after a quiet opening, whilst the intro and ensuing beat to ‘Circles’ screams 80s pop-rock excess but again, the muscular guitars helps to provide a modern touch.

Overall, I am impressed with this record and I have been rewarded once again for giving a new band a chance. I like what A Life Divided have attempted to do and whilst it won’t be to everyone’s taste, I think they have largely succeeded, offering listeners the opportunity to gorge on big hooks, big choruses and an even bigger dollop of retro nostalgia.