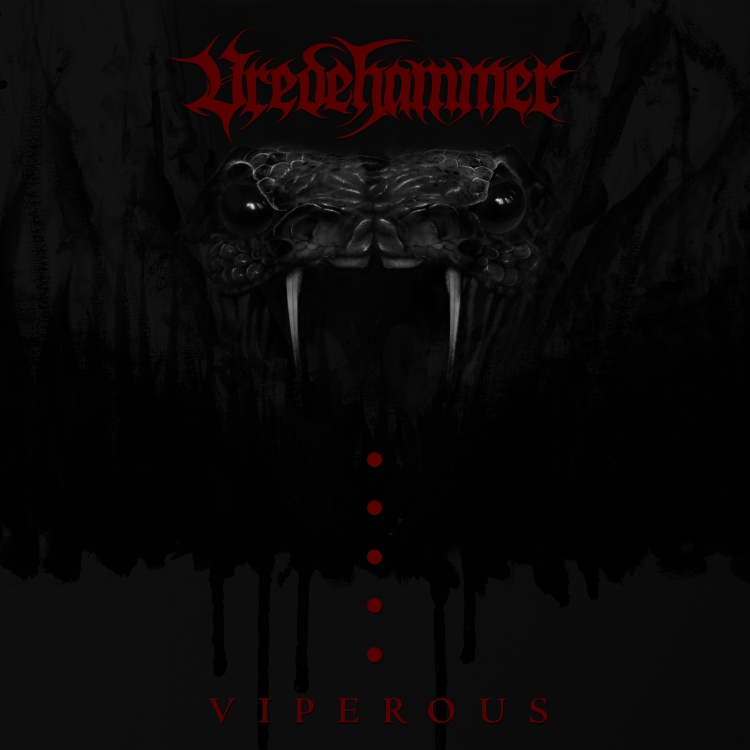 The name Vredehammer is new to me but have become a new discovery at the beginning of 2020 as I scour the Earth for new and exciting heavy music to get my teeth stuck into. The first reason for checking out this record was the label to be honest, as Indie Recordings have a strong reputation in the Mansion of Much Metal. They are not a label to serve up much in the way of dross, so it’s usually a safe bet to check out their releases.

Secondly, the combination of Norway and black metal is too good to pass up. Church burnings aside, as most of us are well aware, the Scandinavian country has a rich heritage for this kind of music. They were one of the original creators and they continue to entertain and innovate within the scene.

Thirdly, I knew I had to delve further into the world of Vredehammer when I heard the lead single ‘Aggressor’. Arguably it isn’t what I normally gravitate towards but something caught my ear and I felt compelled to investigate. And what I discovered was that Vredehammer began as a one-man project at the hands of Per Valla but has, over the course of the last decade or so, become a trio, comprised of Per Valla (guitar, keyboards, bass, and vocals) alongside guitarist Kristoffer Hansen and drummer Kai Speidel.

What I will say is that my initial thoughts about the album have slowly altered over the course of the past week or so of intense listening. At the outset, I was impressed by the music that these three musicians created, but I didn’t feel as emotionally engaged as I felt I wanted to be, or should be. I respected the proficiency of the musicians because it was clear early on that technically, they could seriously play. Everything was very precise, well-structured, and performed. But I didn’t warm to the music. ‘Clinical’, ‘polished’ and ‘cold’ were three words that floated around my brain as I listened to the nine tracks that make up ‘Viperous’. I also felt that the record could be dismissed as lacking in variety.

Not now, though. I was on the train, heading to the day job a few days ago where I had the epiphany that makes listening to music so rewarding and exciting. Something clicked and since then, listening to ‘Viperous’ has been a real joy. I’d actually go so far as to suggest that it is borderline addictive.

At it’s core, the music is rooted in black metal but what I really like is the injection of other elements as well. For example, some of the riffs and structures borrow from the likes of death and thrash metal; indeed, there’s a demonstrable thrashy vibe to some of the material on this record. I’m vaguely reminded of ‘Nero’-era Satyricon at times actually.

I am led to believe that the keyboards, at least in their current guise, are a new addition to the Vredehammer sound. Referred to in the press release as ‘80s horror keyboards’, I find this to be one of the prime reasons why I have so warmed to this album – the keys are used both overtly and more subtly but regardless, they provide some really cool, dark atmosphere that pulls me in more and more with each listen. The keys also inject an electronic, almost mechanical feel at points as well as providing much of the understated melody. This isn’t a fundamentally melodic affair but there’s enough in this regard to satisfy me, with certain moments becoming surprisingly catchy and memorable as time goes by.

Personal favourite songs are tough to pick because ‘Viperous’ is very consistent throughout. What I will say however, is that the first three songs in particular make a great impact. ‘Winds of Dysphoria’ kicks things off with a seriously great and bold synth intro, making the most of those newly-added keys. The sense of tension and menace is palpable before a savage, scything riff and some incredibly aggressive drumming cuts through the speakers. Blastbeats and fast riffing drive the trackalong as Valla’s gruff, rasping vocals join the fray. It’s a relentless attack of a song that I’ve grown to love due to its uncompromising attitude and delivery, enhanced by the return of the sinister keys in the latter stages that allows the atmosphere to return as well as introduce a touch of slower groove. The production, mixed and mastered by Jacob Hansen is great too, with a clarity that accentuates the tumult.

If anything, the aptly-titled ‘Aggressor’ is even more brutal than its predecessor before it settles into an infectious rhythm and delivers one of the most immediate tracks on the album. There’s a touch of Dimmu Borgir’s Shagrath to the affected vocals and the synths are much more up-front and centre too, which I really like.

‘Suffocate All Light’ delivers more great, razor-sharp riffs and it’s here that the influence of working with Abbath has clearly rubbed off on Valla, because there’s an Immortal quality to the cold, clinical riffs. And then, at the mid-way stage, it all clears away to allow the keys to take centre stage and take the song in a more atmospheric and measured direction. I can’t now get enough of the song and those bold, pulsing synths that pierce the darkness.

The remainder of the record follows in a similar vein, with blastbeats aplenty, savage riffs at every turn, layers of infectious synths, and malevolent vocals spouting dark lyrics apparently based around the novels of Stephen King. ‘Skinwalker’ is a cracking, twisted affair, but then so is the brutal ‘Wounds’. In fact, the more I listen, the more I hear things that I like and a greater subtle variety within each of the initially similar-seeming compositions.

With ‘Viperous’, Vredehammer have created a dark, uncompromising and sadistic record of extreme heavy metal that is sure to make their stock soar. I’m a complete covert to their cause and I suspect if you check it out, you will be too.