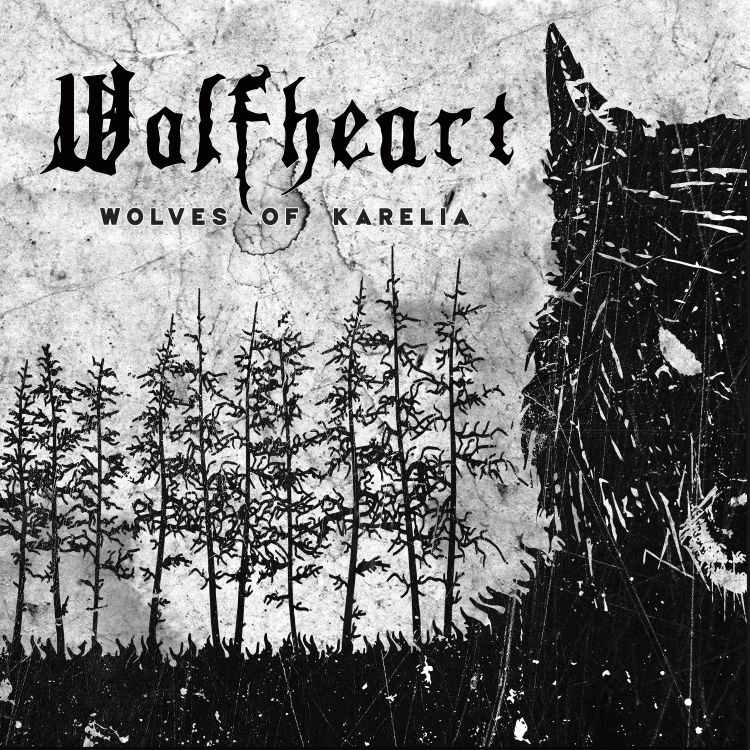 When you’re a prisoner in your own home, on lockdown during the icy grip of a pandemic that is claiming thousands of human lives every day, it seems fitting to be listening to music that is dark and aggressive. Even if the sun is beaming through the window of the ‘Room of Much Metal’ in what appears to be a concerted effort by Mother Nature to taunt us further. The musical accompaniment to today’s installment of ‘Groundhog Day’, is none other than ‘Wolves Of Karelia’, the fifth album from Finnish metal band Wolfheart.

If you have followed manofmuchmetal.com for a little while, you might remember that I was rather impressed by Wolfheart’s previous album, ‘Tyhjyys’. Well, right off the bat, this latest effort is already ahead of its predecessor by virtue of the fact that it has been given a title that’s actually pronounceable! I joke of course but when I tell you that ‘Wolves Of Karelia’ is an excellent album and a further step up from the last, I’m being deadly serious. The stream-only format of the promo is the only reason why this review arrives after the release date; I owed it to the band to give it as much time and attention before putting this review together.

The fact that this is such a leap forward is an impressive feat given the fact that the core of the band is back to a trio, following the departure of guitarist, Mika Lammassaari, who joined initially as a session guitarist only to impress enough to be given a full-time berth. He has been replaced on this album by another session six-stringer, Vagelis Karzis, who joins the core of drummer Joonas Kauppinen, bassist Lauri Silvonen and the band’s founder, mastermind, guitarist, and vocalist Tuomas Saukkonen. And much of the credit has to inevitable go to Saukkonen as he is once again the driving force behind Wolfheart, as well as the primary creator of the music. And, on that score, there is much to admire on ‘Wolves Of Karelia’.

What I hear on this record is a rather intoxicating blend of many genres that all come together with style, elegance, and where none of the elements is out of place with the rest. What I mean by this is that none of the various elements are undermined or overshadowed, each being given their place in the overall musical tapestry on this record. Normally, it is a relatively simple job to identify the core identity of a band but here, the exercise is that much harder. If I was to be pushed, I’d have to say that it is melodic death metal, but there are so many strong black metal influences, not to mention folk-esque and doom/dark metal overtones that I’m never completely certain. Not one to beat myself up over pigeon-holing bands, I’d prefer to refer to the music here as melodic extreme metal and leave it there.

Earlier, I gave Mr Saukkonen plenty of plaudits for his efforts with this music, but I want to make reference to the performances of the other musicians too, because without them, ‘Wolves Of Karelia’ wouldn’t be the engrossing and authentic beast that it is. All play an equal part in the overall delivery but a special mention has to go to drummer Joonas Kauppinen, who sounds utterly inspired on this album, full of power but also able to deliver some intriguing and subtle beats when the music demands. Of course, with a great production the music can come alive further and that’s definitely the case here as Wolfheart have never sounded better in my humble opinion.

On to the songs themselves and at this point, things get very tricky. I suggested that ‘Tyhjyys’ was hampered by a less strong tail but with ‘Wolves Of Karelia’, I am delighted to be unable to make the same observation. Comprised of eight songs, there is simply no room for filler or for anything approaching sub-par material. Instead, each and every song has something about it that means skipping tracks or losing interest just isn’t an option. What I can say though, is that there’s a thread that runs through the material and that’s the golden thread of elegant, subtle and intelligent melody, melody that grows on the listener, but which demonstrates a rich sense of melancholy and longing. This is enhanced by the use of orchestration and also by the use of acoustic guitars in places, but even without these added textures, the melodies are such that they’d still be as strong and beguiling.

As early on as the opening moments of the very first track, ‘Hail Of Steel’, even the most tired and jaded metal fan would find it difficult not to get caught up in the epic aural vista that is painted so vividly. It is the extreme metal equivalent of standing out in the wild, the wind whipping across the barren and untamed land, as the lone stranger surveys . And then, before long, the music moves up a gear in intensity and pace, with ferocious drumming, sharp heavy riffs and the familiar growls of Saukkonen assaulting the ears, the tumult flitting between death and black metal expertly. But those orchestrated elements do just enough to soften the jagged edges of the music and provide an epic sophistication, one that resonates with me more than I was expecting if I’m honest. The lead guitar solo that emerges contains real despair but also great beauty, signalling the end of the song in superb fashion.

By contrast, ‘Horizon On Fire’ starts with the kind of aching melancholy that one might expect from Anathema or suchlike, before it launches into full-on attack mode complete with blastbeats, fast-picked riffs and more aggressive vocals. And yet the early melodic ideas remain intact despite the aggression, allowing the listener to maintain an emotional connection with the song. Lead guitar notes introduce another layer to the intense melodies and my jaw is almost on the floor by this point. I thought it would be good, but not this good.

Other highlights include the monstrously heavy, almost doom-like riffs within ‘The Hammer’, a beast of a song that ends with some great piano notes as well as a gorgeous extended acoustic outro. ‘Arrows Of Chaos’ is perhaps the heaviest and most aggressive track on the record but even this song has lashings of those elegant orchestrated embellishments that mean it is memorable despite the initial harshness. And then ‘Ashes’, which closes out the record, does so with real style. It begins slowly with more acoustic guitar work, after which it plunges headlong into epic, almost cinematic territory, topped off with some of the most heartbreaking lead guitar melodies anywhere on the album.

As I mentioned before, I had hoped that ‘Wolves Of Karelia’ might be good. But I had no idea that it would be this good. I was impressed by ‘Tyhjyys’, but here I am quite simply blown away. Clearly the band have left nothing behind with this release; they have given blood sweat and tears to create what has to be their greatest album to date, an album that eclipses all of Saukkonen’s previous work as well with his various other bands before Wolfheart. If you were a fan before, you’ll adore this record. If you’re new to Wolfheart, but you like melodic and epic-sounding extreme metal, then you cannot possibly let ‘Wolves Of Karelia’ pass you by. To do so would be a crime punishable by exile to the farthest reaches of the Earth where there’s literally nothing to do but regret your lamentable decision.