In the pursuit of reviewing this album, I have had to ask myself the same question several times: Is it possible to enjoy an album that you don’t really like but which you admire and respect? It may seem like a strange question to pose yourself, but let me explain a little further.

‘Spirituality and Distortion’ is the latest album from the band called Igorrr, and it should come with a Government health warning. And, if it wasn’t for the fact that it has been released in the grip of the Covid-19 pandemic, it may well have been because this is not an album for the faint-hearted. It requires the most open of minds, the patience of a saint and the most eclectic of musical tastes. And even then, it might be too much for many.

Taking a step back for a moment, it should be noted that Igorr is essentially a one-man project, the brainchild of French multi-instrumentalist Gautier Serre. However, on this latest endeavour, he has enlisted the talents of numerous musicians and according to the accompanying press release, these include, amongst others, violinist Timba Harris, bassist Mike Leon, pianist Matt Lebofsky, Oud player Mehdi Haddab, accordion player Pierre Mussi, Kanoun player Fotini Kokkala and harpsichordist Benjamin Bardiaux. The list doesn’t stop there, as the album also includes various vocalists including Laure Le Prunenec (operatic vocals), Laurent Lunoir, Pierre Lacasa, and Jasmine Barra. There’s even a guest appearance from Cannibal Corpse’s George ‘Corpsegrinder’ Fisher on the track entitled ‘Parpaing’.

From the veritable smorgasbord of musicians listed, you’ll perhaps not be surprised to learn that ‘Spirituality and Distortion’ is a truly unique creation, the likes of which I’ve never previously heard. Returning to the press release, it accurately talks of a blending, or, more accurately, a ‘slamming together’ of ‘disparate musical styles ranging from death and black metal to breakcore, Balkan, baroque and classical music…’ Or, as an acquaintance of mine suggested earlier today, it’s ‘baroque operatic glitch core black metal with Eastern influences and a concertina’. Either way, you get the idea that it presents one hell of a listening experience.

The Eastern influences are immediately put front and centre, thanks to an oud-led intro to ‘Downgrade Desert’ but it isn’t long before Igorrr demonstrate their metal credentials via a properly heavy, chugging riff and wonderfully crisp drumming that dabbles with blastbeats as well, for good measure. The vocals are a mix of gruff and striking female tones that accentuate the Eastern flavour and I find myself appreciating this track.

‘Nervous Waltz’ follows and immediately throws something new into the mix. A baroque intro comprised of violin and harpsichord is built upon with more heavy riffs at places, strong rhythms, choral vocals, piano and an increase of electronic sounds and samples as the song develops. These electronic sounds then take centre stage on the aptly-titled ‘Very Noise’ which sounds more like extreme jungle music than anything else. 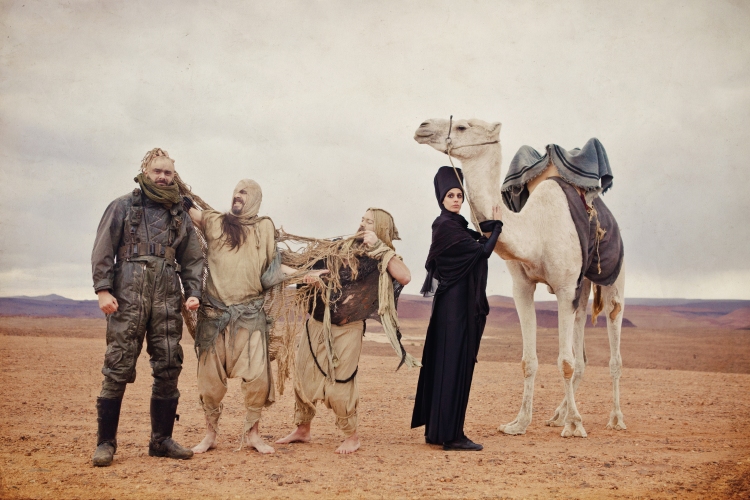 From then on, it’s no exaggeration to say that no two songs ever sound the same, an impressive feat given that this album is comprised of no less than fourteen songs. ‘Hollow Tree’ introduces a more cinematic element with lots of atmosphere a more pronounced symphonic edge, particularly in the final moments. Instrumental piece, ‘Camel Dancefloor’ lets the bass become more prominent with a demonstrably funky edge, whereas the aforementioned ‘Parpaing’ is a no-nonsense extreme metal workout where the quirkiness is, for Igorrr, kept more or less in check…if you ignore the computer-game-like mid-section of course.

A first blast of the accordion appears within the very odd ‘Musette Maximum’, whereas the more pronounced black metal elements within ‘Himalaya Massive Ritual’ mean that it is another song that I can get more on board with, even if it explores a plethora of other ideas within its seven-minute life.

I could go on but ultimately though, I have to address the elephant in the room and ask myself whether or not I like this album. The answer, from a purely ‘would I like to listen to this frequently for pure pleasure and enjoyment?’ point of view has to be ‘no, I don’t’. However, from a ‘do I admire it?’ perspective, I’d have to say ‘yes’. Further, I believe that Gautier Serre deserves all of the plaudits that he receives for this album because it is an incredible achievement. He has taken an improbable recipe and made it a reality, one with many positive attributes too.

I’m left in a quandary then, because on the one hand, I don’t really enjoy ‘Spirituality and Distortion’ that much, whilst on the other, I find it fascinating, original and unique, with a couple of killer songs her and there. Who’d be a reviewer eh? What I will say about this record, is that it needs to be heard to be believed. Even if, like me, you don’t warm to it and take it to your heart, the experience of listening to it is well worth the effort, trust me. And even if my description leaves you confused and unsure, check it out anyway because there may be something that clicks inside of you as you discover the various twists and turns in aural form rather than via the written word. Whatever you decide, it won’t be a wasted 55 minutes of your life, I can guarantee that. I can also guarantee that if I was to score ‘Spirituality and Distortion’ purely based on it’s originality, it’d be given a much higher rating. But, for me, taking everything into account, it has to be…