Denver, Colorado is the destination of my next review at manofmuchmetal.com, as it is home to a four-piece that go by the no-nonsense name of Pile Of Priests. I’m not really sure what attracted me to this album amongst the plethora of options available to me from across the globe but I checked it out and initially liked what I heard just enough to avail myself of the promo.

Formed over a decade ago, it has been slow progress for the American quartet, comprised of bassist Patrick Leyn, vocalist/guitarist Evan Salvador, guitarist Daryl Martin and drummer Evan Knight. However, 2020 sees the release of this, their self-titled, sophomore full-length album and with it, a few heads might turn in their direction. They certainly deserve to on the strength of this release too.

The great thing about Pile Of Priests is that, although they are undoubtedly an underground extreme metal band, their music is instantly likable. They take a handful of death metal, a fistful of thrash, and blend it with a decent dollop of melody, before taking a trip back in time, to the 90s, in order to inject a touch of the old-school to their recipe. What comes out at the end is really rather palatable and I have found myself taking to it a lot more strongly than I was first expecting. Think mid-era Death, blended with someone like early Testament and you’re not overly distant from the reality of ‘Pile Of Priests’.

Firstly, there’s the sound of the record. It is meaty, but in no way over-produced, giving an authentically rough-around-the-edges feel that’s perfect for the music, making it appear slightly gritty and dirty. Nevertheless, all the instruments are given their fair share of the limelight thanks to decent separation, with the bass of Leyn particularly noticeable, adding density and extra power to the material as a whole and to the riffing in particular.

After the imaginatively-titled piano ‘intro’, with its blend of delicate melodies and occasional dalliances into uncomfortable, discordant realms, it is up to ‘The Aversion’ to make the first real impression. And it does so with a down-tuned monster riff and double-pedal drumming, whilst the bass punches you in the gut the entire time. The growls of Salvador are nicely deep and throaty, whilst the lead guitar lines add that sense of melody that gives the track its accessibility. There’s a gratuitously groovy segment that emerges too, which creates a great early impression. 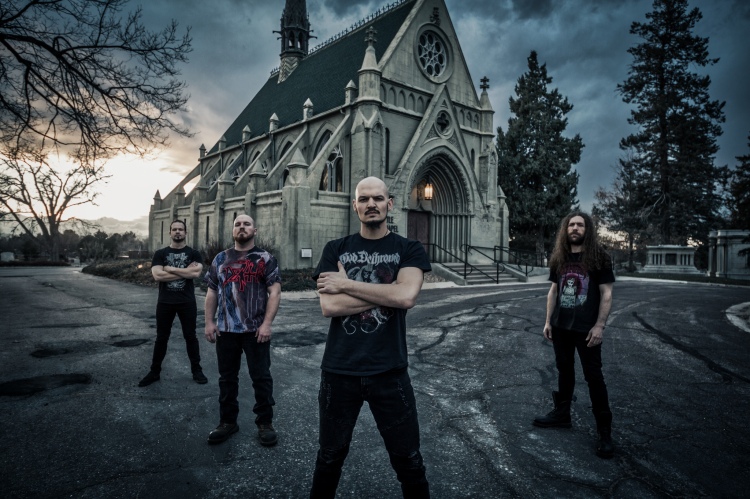 ‘Death Of The Paragon’ opens up with a quiet melodic clean guitar melody as we’re treated to an atmospheric spoken-word intro. The atmospherics are all over this track, one that’s generally of a slower pace than its predecessor, longer, more complex, and more intent on creating a dark, yet groove-laden, melodic listening experience.

There’s a gloriously old-school feel to the excellent ‘Exile Unto Divination’, with riffing that calls to mind ‘The Avenger’-era Amon Amarth and a slick delivery to go with the faster tempo. The haunting lead solo that arrives just after the half-way mark is out of the very top drawer too, preferring touch and feel over speed and dexterity.

Just when you’ve got used to the rumbling growl of the vocals, ‘Conjunction Of Souls’ lets rip a much more higher-pitched and caustic rasp to add another touch of variety to proceedings. With another sumptuous melodic solo on top, this has to be one of many high points on this record. Even the mid-album palette-cleanser that’s ‘The Threshold’ is a great addition, acting as more than just a quieter, more introspective instrumental interlude. There’s an unsettling atmosphere and feel to the track, even though it delivers an initially-inviting, clean guitar driven melody, supplemented by a throbbing bass and more subtle, nuanced drumming.

‘Deus Delanda Est’ restores some normality with a thunderous approach, whilst ‘Bloodstained Citadel’ is one of the fastest, thrashiest and dirtiest compositions on the entire record. And the closer, the eight-minute ‘The Restitution’ begins in quiet, clean guitar fashion, complete with guest female vocals. The song then explodes into full life with another great lead solo before riffs enter that crush everything in their path and drums that pummel us into submission. And yet, the song has an immediacy about it that cannot be ignored or marginalised. It’s altogether a great ending to a very nice album indeed.

Coming out of nowhere and being an album I checked out on a whim, my delight is increased several-fold. If you’re after a taste of nostalgia in 2020 and you’re a fan of bands like Pestilence or Death, then this could be your salvation. Failing that, at least it’ll make you bang your head so vigorously you might forget reality for a short while – 43 great minutes to be exact.