I’m late to the party twice with this record, because not only was ‘Eternity’s End’ previously self-released by Astralborne but now that they are signed with Prosthetic Records and can re-release their debut offering, I am bringing this review to you after the official release date. The Man of Much Metal begs forgiveness from my small but perfectly-formed readership and seeks redemption with what’s to follow.

For those unfamiliar with Astralborne, as I was until a couple of weeks ago, the band is in fact a trio, comprised of drummer Jayson Cessna and guitarist Derik Smith, both of Hammer Horde fame, alongside bassist/vocalist Paul Fuzinski. Astralborne was created just a few years ago as an alternative outlet for the musician’s creativity, the kind of creativity that falls within the broad sub-genre tag of melodic death metal. As I have posited many a time on these pages, melodic death metal can mean a multitude of things, from the sublime to the ridiculous. Trust me though, when I say that Astralborne are very much on the side of ‘sublime’ based on the music within ‘Eternity’s End’.

It isn’t all plain sailing though and I want to start with the negative and get it out of the way. And that’s the production of this record. It may be that the promo files I have are not the best quality and that the final version may be of a higher quality. However, if that isn’t the case then I’m afraid you’ll be listening to this music through the prism of a rather poor production. I’m all for bands trying to recreate a bit of authenticity and rawness in favour of a polished production. However, from what I’m listening to, this release was put together on a budget that might have struggled buying a four-pack from the local off-licence. Of course I’m over-stating things, but you get the idea – there’s a definite ‘do it yourself’ vibe at play here that does detract just a little from my listening pleasure overall.

Mind you, that’s pretty much the only negative I have. And, speaking of playing, that’s where these three musicians start to come into their own because they can seriously play their instruments. It’s a little inconceivable at times that this music has been put together by just three humans, such is the strength of the content. Yes, it is melodic death metal but it is worthy of the title, being heavy, abrasive and extreme, yet deceptively melodious. Fusing what I’d refer to as ‘proper’ death metal brutality, the music is then blended with a touch of thrash in places and maybe a little bit of black metal too, lending themselves to that ‘blackened’ descriptor as well. 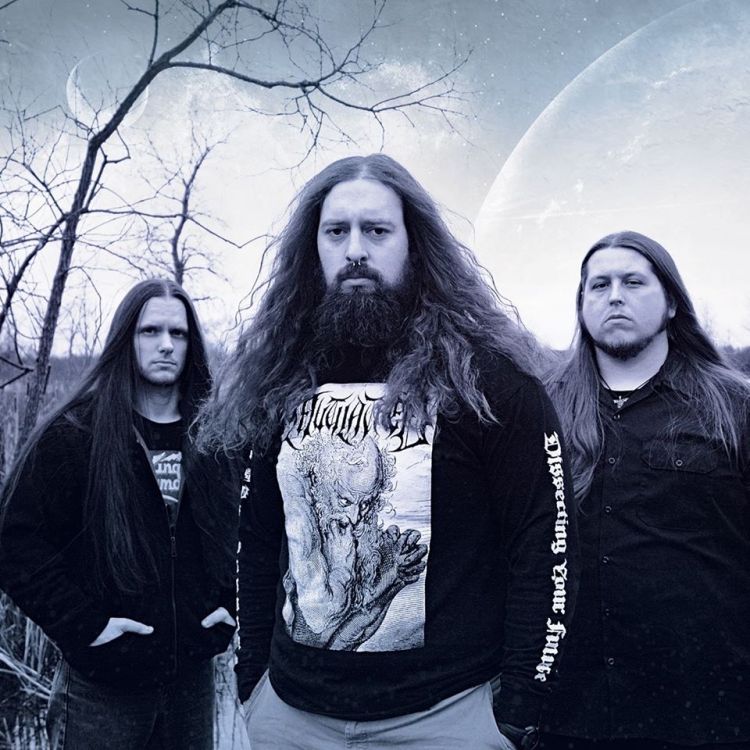 This latter element is evident from the first track, ‘Eulogy In Black’, which fuses keys with a rather beautiful acoustic guitar melody and is instantly reminiscent of Dissection as a result. No bad thing though, considering Dissection are one of my fondest discoveries as a teenager.

From there, the full force of Astralborne’s extreme metal is unleashed courtesy of the near-seven-minute ‘Attending The Funeral’. It’s a delicious blend of brutality and memorability, with Fuzinski’s dep and guttural vocals at the centre of the carnage, alongside frenetic drumming, galloping tempos, weighty riffs and an abundance of guitar harmonies that really give the track its strong identity.

The reprise of the acoustic melody from the opening track at the end of follow-up composition ‘Transcendence Of Flesh’ is the master stroke that simply adds the icing to the cake of what is quickly becoming a well thought-out and intelligently-written album.

The icy riff that introduces ‘Paragon Amiss’ gives way to some of the most brutal and relentless passages on ‘Eternity’s End’ but even then, there is enough in the band’s locker to avoid the song falling into the abyss. That opening riff is reprised for a start and it becomes insanely catchy. Then there’s the lead guitar work that comes across as playful and cheeky in a strange way.

The pace is demonstrably slowed, at least initially, for ‘Centuries (In Agony)’, whilst the instrumental piece, ‘Inglorious 20XX’ has a thrash-meets-trad metal vein running through it, thanks to more expansive guitar work from Derik Smith, as well as well-placed groove that helps to provide a narrative in the absence of vocals. And the epic, rousing closure to the song is just delightful.

The centrepiece for this fine album must be the twelve-minute title track, however. Acoustic interludes, quiet passages, all-out blastbeat-led aggression, frosty riffs, sublime melodies, expressive leads, opulent strings within the sombre outro, frequent changes in direction and tempo – it really does have it all and more besides, even a demonstrable ‘prog’ feel in the way that the track shifts from section to section pretty effortlessly.

By the time the album closes via ‘Hell Patrol’, a relatively unnecessary Judas Priest cover in my humble opinion, Astralborne have done more than enough to convince me that they are the real deal. Yes it could benefit from a clearer sound, but if you can overcome that minor anomaly, then what you’re left with is a set of very strong melodic death metal compositions that are worthy of the description every day of the week, especially when listened to frequently, allowing all the nuances to work their charms. I recommend ‘Eternity’s End’ and am already eager to hear what the trio have in their locker for the next release.