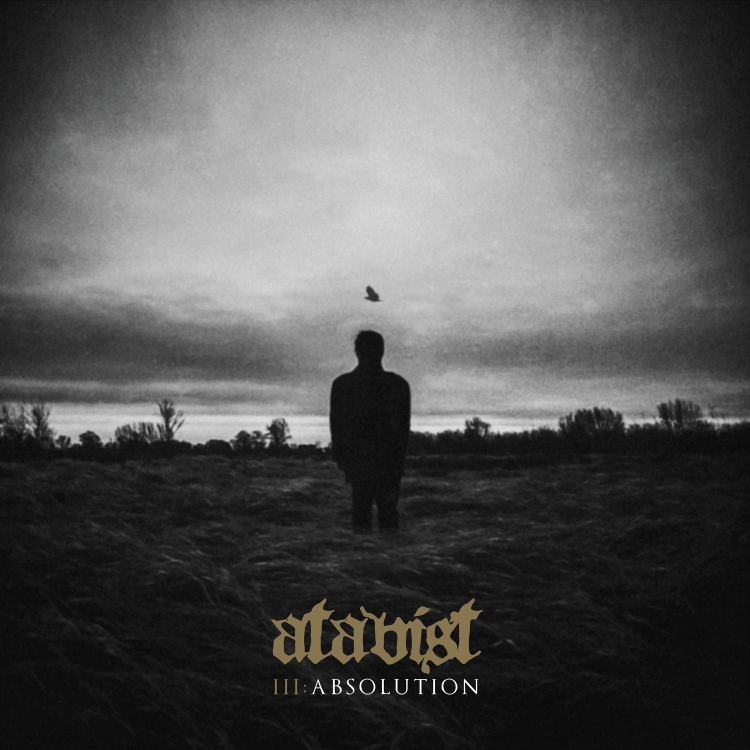 Not to be confused with my recent critique of Canadian epic melodic death metal band Atavistia, this review is an entirely different proposition altogether. In fact, a similar name is pretty much all this UK band has in common with the North American outfit. You see, Atavist prefer their music to crush. And when I say ‘crush’, I mean they want to crush your ears, your bones, your hope, and every last fibre of your being. I’m fairly sure that if there was anything left in one piece at this point, they’d want to crush that too. This is death/doom metal of the most soul destroying kind and, not to spoil the ending too much, it is absolutely incredible.

Atavist have been missing in action, hiding for a decade but emerged from the depths in 2017. And now, after thirteen years, they are ready to present us with their third full-length album, entitled ‘III: Absolution’. And it isn’t the kind of music you want to listen to if you’re already a little depressive, because it is liable to send you into even darker place, a more morose, uncompromising and bleak place, where human emotion is laid bare to a soundtrack that is equal parts brutal, aggressive, fragile and beautiful.

For those unfamiliar, Atavist is comprised of Winterfylleth guitarist and vocalist C Naughton alongside bassist S Ryan, drummer C Cox and vocalist T Bradshaw. Together, they have created something rather special, a four-track, hour-long exploration of loss, suffering and ultimately absolution that’s as draining as it is addictive. As Naughton states so eloquently in the press release, “There is no joy here, only relief at the end of an arduous voyage.” There is no getting away from it, ‘III: Absolution’ is an exhausting experience. But it is an incredibly rewarding and immersive listening experience too.

The album begins with ‘Loss’ and, as you might expect from its title and what I’ve already said about the record, it isn’t an upbeat affair whichever way you try to look at it. For sixteen minutes, it manages to tug at the heartstrings, whilst pulverising any sense of hope or positivity to which you may have been clinging for dear life. But for these very reasons, it is one my favourite compositions on the album.

The song opens with a lightly distorted guitar which delivers a very simple two-note melody whilst almost ghost-like, you notice the introduction of gentle synth notes from Mark Deeks (Winterfylleth/ARD) and delicate strings, courtesy of violinist Bianca Blezard (Winterfylleth). The notes from Blezard in particular are poignant to the point of being heart breaking. It takes three minutes before we hear the first of many crushing riffs, alongside the deep, rasping vocals that sound tortured, carrying with them a primeval despair. But the delicate, simple melody remains and soon we’re back to the sombre minimalism of the opening, albeit with the added elegance of cellist Jo Quail (Mono/My Dying Bride) to support the cast with their morbid dirge.

Just shy of the halfway point, the song takes a turn for the more aggressive, but it never accelerates beyond a slow, funeral-like crawl. Squealing pinched harmonics and laboured, deliberate guitar leads add to the tumult to great effect, before Deeks takes centre stage, creating a bleak soundscape alongside a clean guitar, punctuated by occasional blasts of single distorted chords. You sense the track is building and you’d be right, as it opens up into a simply stunning melody, whilst remaining heavy as hell. You feel as if all the grief and frustration in the world is being poured out through the instruments at this point. I’m not sure if it is the power of the music alone or the fact that I’m listening at such an uncertain time, but I’m literally moved to tears as the heaviness ebbs away to be replaced by more rich strings, underpinned by subtle synths, as if the main protagonist in this story has lost all fight and is slowly succumbing to the weight of grief. ‘Struggle’ is a different beast altogether. It wastes almost no time in blowing the listener’s head off with a funeral-paced, furious and ominous-sounding riff. There is a hint of melody, but it is just that – a mere hint, as the order of the day here is to pummel us with relentless sombre aggression, be it via the earth-shaking, minimalist bass-only sections, lumbering or fast-picked, icy cold riffs, or the slow monotonous heartbeat of the drums. T Bradshaw’s vocals convey the struggle of the central figure expertly too. In fact, I have to say that the entire song can be a struggle to listen to, but in a good way; you feel incredibly uncomfortable in places and by the end, you feel battered and bruised, unsure if you have the strength to continue.

At a mere nine minutes and forty-four seconds, ‘Self-Realisation’ is the shortest of the four tracks on ‘III: Absolution’ but it packs a hefty punch nonetheless. In a way, given the sheer unrelenting heaviness with which it opens, it continues in a not too dissimilar vein to where its direct predecessor left off. The tolling bell is a nice touch, a classic staple of the doom genre, but executed without cliché here. If anything, the pace is slightly raised within this composition at times, whilst at others, we’re back to funeral dirge territory where there’s a hint of early My Dying Bride within the crushing riffs that confront us. Hell, they sound good, striking right to the heart of any true death/doom metal fan.

Finally, after the sheer weight of the two previous tracks, we’re left with the closing title track. Kicking off with a bleak soundscape from Deeks, I’m immediately drawn in, compelled to see where I’m taken on this final eighteen-minute leg of the journey. The answer is that we’re taken somewhere stunningly beautiful, yet sombre and mournful, but with just the merest hint of a returning hope. The early promise delivers as the synth-led vista develops into one of the most beautiful melodies I’ve heard this year. As the band begin to join in around Deeks’ haunting environs, I get chills and goosebumps as the brittle beauty works its ponderous magic on me. As I listen, I find myself staring at the lone figure on the album cover, imaging myself in their shoes, wondering…. I’m absolutely invested in the music and the feelings portrayed within by this point. The heavy, distorted guitar notes are left to hang masterfully, resonating, and as the song develops, there is a vague sense of gathering momentum towards a resolution which manifests itself in a rousing, majestic finale built around the central, aforementioned melody.

Quoting Naughton again seems relevant. He said: “There is no joy here, only relief at the end of an arduous voyage.” ‘III: Absolution’ is indeed an arduous, difficult and long journey, but at it’s conclusion, I would not use the word ‘relief’, as I am disappointed that the music has ended. Additionally, whilst there may be no joy for the central protagonist here, I am filled with a bittersweet joy for having heard such powerful, emotive and crushing music. ‘III: Absolution’ is simply incredible and once you’ve sufficiently cheered up, check it out.