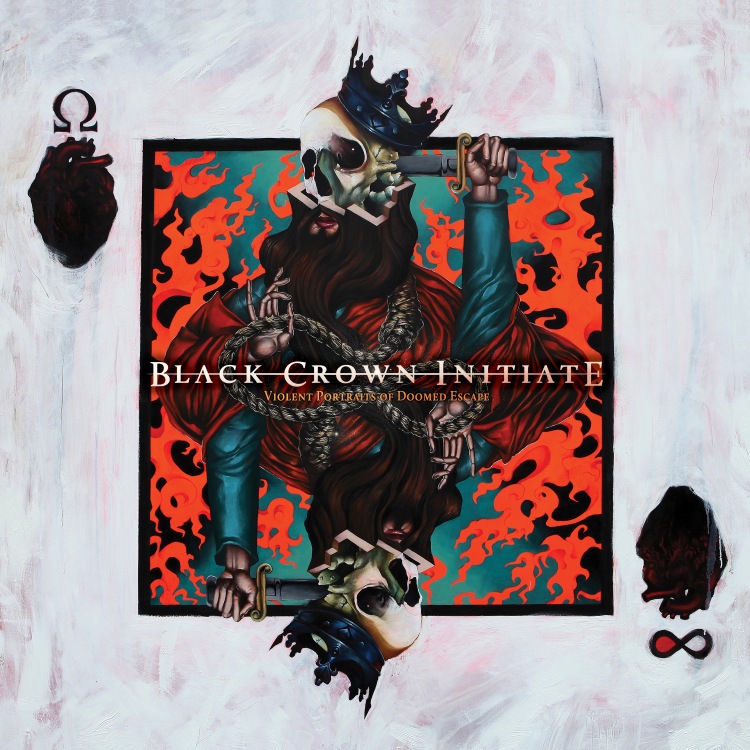 Another new ‘discovery’ for me today, in the shape of Black Crown Initiate, a progressive death metal outfit from the United States. I put the word discovery in quotation marks because this isn’t so much a new discovery, more of a new exploration. I have been aware of the name Black Crown Initiate for a few years now, primarily because it was hard to avoid all of the hyperbole and critical acclaim that seemed to fly in their direction following their first two album releases, ‘Wreckage Of Stars’ in 2014 and ‘Selves We Cannot Forgive’ released two years later.

But, despite my general love of progressive music and of death metal, something held me back from diving into the world of the Pennsylvanian quartet. And that ‘something’ was the way in which many lauded the band and suggested that they may be the modern day Opeth. For most, that would have been enough to sell a kidney, their spleen and maybe even their first-born child for a chance to hear the music. For me though, not so much. I am one of a very small group that simply cannot feel the love for Opeth. And so, rightly or wrongly, I never felt compelled to check out Black Crown Initiate too closely.

But enough is enough and so, when I was sent the promo from the good folk at Century Media, I decided to throw caution to the wind and see what all the fuss was about.

The first thing to say is that I do certainly hear why some will have made the connection with Opeth, at least before the Swedes decided to go full-on prog rock. Mind you, when the band in question helped to shape an entire subgenre, it is perhaps difficult for those who follow not to be inspired by such an important entity.

That being said, I also hear, in Black Crown Initiate, a band that is surprisingly unique in their approach, trying new things and largely pulling it off with some success. They have taken the sounds of the past and brought them kicking and screaming into the modern world, taking accents of newer artists along the way, but forging something very much in their own image. Yes, fans of older Opeth will almost certainly enjoy this record but so will plenty of others, including myself in that bracket as it happens.

To begin with, I was cautious, almost reticent. And, on a first spin, I found myself thinking deeply about whether I was enjoying what I was hearing or not. Undeniably technical, complex, brutal and serene, I wondered whether there was ultimately something lacking. If it was, it certainly wasn’t in the performances of the musicians themselves as vocalist James Dorton, guitarist/clean vocalist Andy Thomas, guitarist Ethan McKenna, and bassist Nick ‘Bass’ Shaw all put in excellent performances here. As does drummer Gabe Seeber, who stepped in to replace the Samuel Santiago, albeit not as a full member yet, as far as I can gather.

Inventive bass lines, thunderous drumming that incorporates both impressive blasts and more delicate beats, sharp riffing from the guitarists as well as more flamboyant leads and embellishments, acoustic sections, minimalist interludes, a blend of aggressive growls with more mellifluous clean singing…everything seems in place right from the off to make ‘Violent Portraits of Doomed Escape’ a top drawer release.

And, then, after a second and a third spin, in came the game-changer: the melodies. I’ve listened to Opeth many times and generally failed to be moved by the chosen melodies. The same can be said for the most recent Wilderun record that left me cold due to a lack of material that made me desperate to return. With Black Crown Initiate, that simply isn’t the case at all. They might not be instant earworms, but with a little bit of attention and effort, they emerge and when they do, it’s pretty incredible, magical almost. And it is at this point where you start to really appreciate the song writing prowess on display here too.

As hinted at earlier, there is a fantastic amount of light and shade utilised in just about every track on this record. It means that whilst this is an extreme metal album, it is far from a one-trick pony, devoid of variety and intent on simply bludgeoning the listener. For every blast beat or gargantuan riff, of which there are many, there is an acoustic interlude, a change of pace, or a section allowing atmosphere to permeate and for some contemplation to take place.

It’s tough to know where to begin, especially as I have waffled on for ages already. But I shall be desperately dull and begin with ‘Invitation’, the opening track. It starts with a mellow acoustic intro, topped off by rich clean vocals from Andy Thomas. And then, from nowhere, it explodes into a riot of calculated aggression, vocalist James Dorton virtually spitting out his diatribes as if possessed by anger. The riff that ensues is mid-paced but rather elegant. The chorus is accented by more of Andy’s clean vocals, which add to its surprisingly catchy nature, the kind of catchy that is more insidious than overt in its attack. But it is the ebb and flow of the song that is its strongest weapon, veering from crushing to calm in the blink of an eye. It is beautifully crafted and sets a high bar for the remainder of the record.

Fortunately, Black Crown Initiate are unperturbed by such things and instead deliver a further eight tracks of aural goodness for us to enjoy. Not all of them are what you might expect either, as ‘Bellow’ is two minutes of what I can only describe as throat singing, carrying with it a dense and eerie atmosphere all of its own. Then the album’s closer, ‘He Is The Path’ is another more tranquil piece, albeit this time featuring deep, almost spoken-word vocals atop piano and violin strings.

Without doubt though, my favourite track has to be ‘Years In Frigid Light’. Not only does it erupt from the speakers with a scintillating malevolence, it also delivers the most immediate and captivating melodies within the chorus, made all the more arresting given the brutality that surrounds it, a brutality bathed in sinister and cloying atmosphere. This has ‘contender for song of the year’ written all over it.

Elsewhere, the breeziness of ‘Trauma Bonds’, especially within the intro and later within the choruses, means that it is essential listening. So too is ‘Sun Of War’ which I initially thought was a cover of a Snow Patrol song thanks to the opening couple of notes. How wrong I was, and delightedly so if I may be so bold. The bass makes a huge impression within this composition, as does the gentle finesse displayed across the band, until the ubiquitous face-shredding ensues, with a nod to early Fear Factory if my senses haven’t fully departed.

Put simply, the wonderfully-named ‘Violent Portraits Of Doomed Escape’ is a stunning body of work. It is the sound of a band that has hit upon something special thanks to their collective abilities, inspiration and flair for experimentation. If this monstrous album doesn’t make it into most extreme metal fans’ year end ‘best of’ lists, I will be shocked. Black Crown Initiate have gone from being just another band, to one of the best experiences I’ve had with music in 2020. Stunning.